Is A 100 Basis Point Rate Hike In The Fed’s Toolbox?

The U.S. Federal Reserve increased interest rates by 50 basis points at its May meeting—marking the largest hike in 22 years. Similar increases may soon become a regular policy action for the Fed as the risk of recession rises.

Enacting its most aggressive monetary policy change since 2000, the Fed announced yesterday following its two-day Federal Open Market Committee meeting a half-percentage-point rate hike and plans to reduce its $9 trillion balance sheet starting in June. The forceful measures aimed at combating historic inflation will result in the benchmark federal funds rate rising to a target range of 0.75%-1%.

While the market had expected the Fed to accelerate its quantitative tightening, the first 50 bps rate hike in more than two decades is likely to be just the first such increase this year, according to S&P Global Ratings.

“We see 50 bps rate movements becoming a regular tool in their kit. We expect them to again reach for it in June with another 50 bps hike—and wouldn’t be surprised if the Fed goes for the trifecta, with a third 50 bps hike in July,” S&P Global Ratings Chief U.S. Economist Beth Ann Bovino told the Daily Update. “This doesn’t mean 50 is the new 25, as a much larger hike may be in the cards and is becoming increasingly likely. What would stop the Fed from ripping off its monetary accommodation band-aid with a 75 or 100 bps move this year?”

The Fed’s aggressive actions come amid the U.S.’s worsening macroeconomic conditions and rising risk of recession.

While the recent brief inversion of yields on two- and 10-year notes in the U.S. Treasury yield curve may have flashed early warning signs, S&P Global Ratings doesn’t see near-term recession danger. But its qualitative assessment of recession risk over the next 12 months has risen to 30%, in a 25%-35% range—with next year carrying greater risk as the Fed’s cumulative rate hikes will begin to bite.

The Bureau of Economic Analysis estimated that U.S. GDP contracted in the January-March period for the first time since the second quarter of 2020, declining 1.4%. On a monthly basis, U.S. output shrank 0.4% in March, following a flat reading in February, according to IHS Markit, now part of S&P Global.

S&P Global Economics expects the Fed to raise interest rates a total of seven times this year, including March’s 25 bps hike and the most recent move, followed by four increases next year.

The shock of significantly higher rates in an unprecedented period of converging risks is moving markets. Although the S&P 500 had its best day yesterday since May 2020 despite the Fed’s action, the benchmark index has already suffered its worst start to the year since 1939 by falling 12.8%, according to S&P Dow Jones Indices and S&P Global Market Intelligence. Equity analysts see little hope that conditions will improve in the near-term. Exposing the bond market’s structural cracks, the Fed’s hawkish policy may also be leaving traditional buyers to fill the gaps despite insufficient demand.

Today is Thursday, May 5, 2022, and here is today’s essential intelligence.

Economic Research: Despite Rising Risks, Yield Curve Is Not Yet Signaling Recession 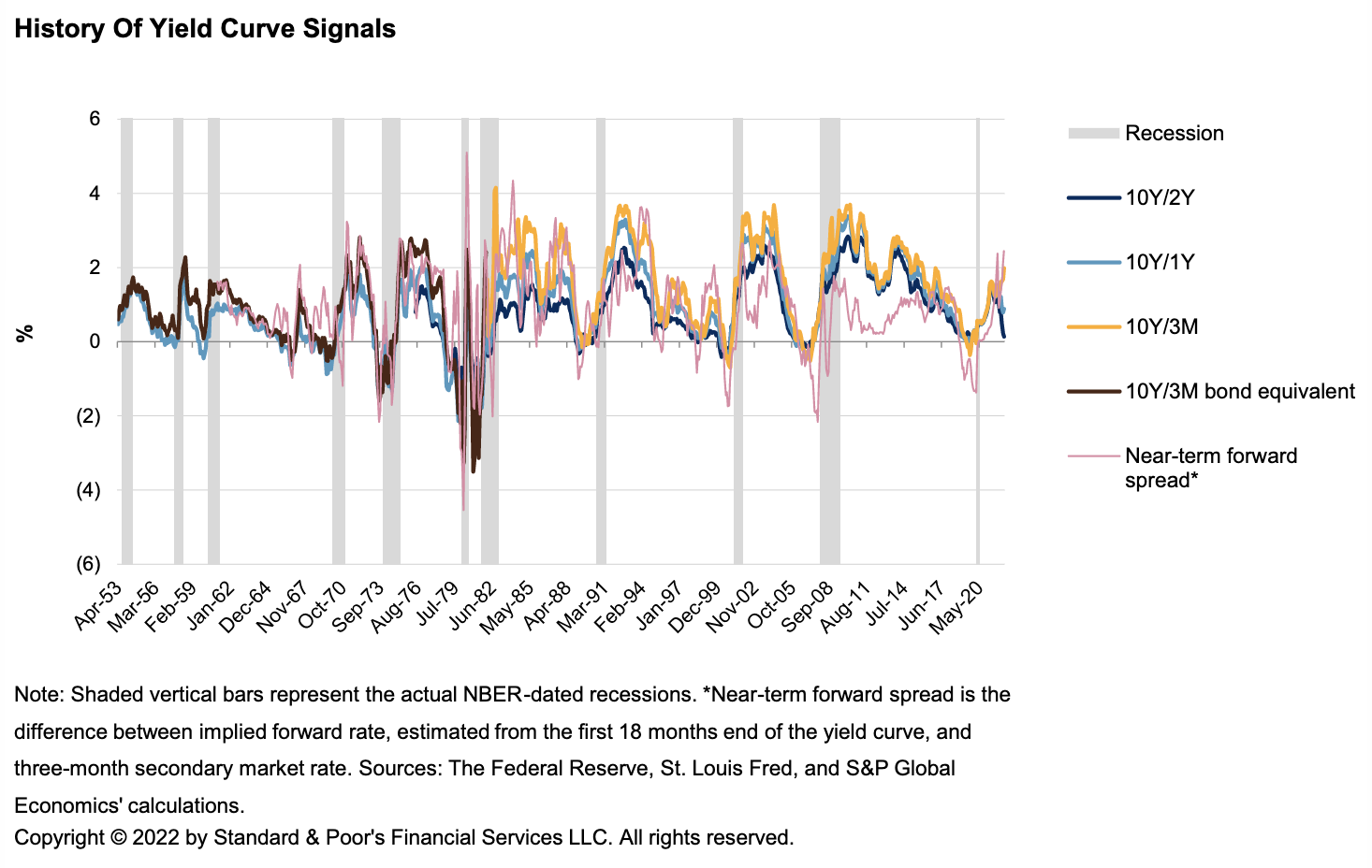 As prices continue to soar and the Russia-Ukraine conflict makes inflation pressures even worse, the Federal Reserve is sharpening its tools to fight the run-up in prices. And now news that the 10-year/two-year curve inverted has led to calls that a recession is around the corner. Although uncertainty over the economic outlook has increased as inflation sits at a 40-year high, S&P Global Ratings doesn’t view the inversion of the yield curve, on its own, as signaling any near-term danger. 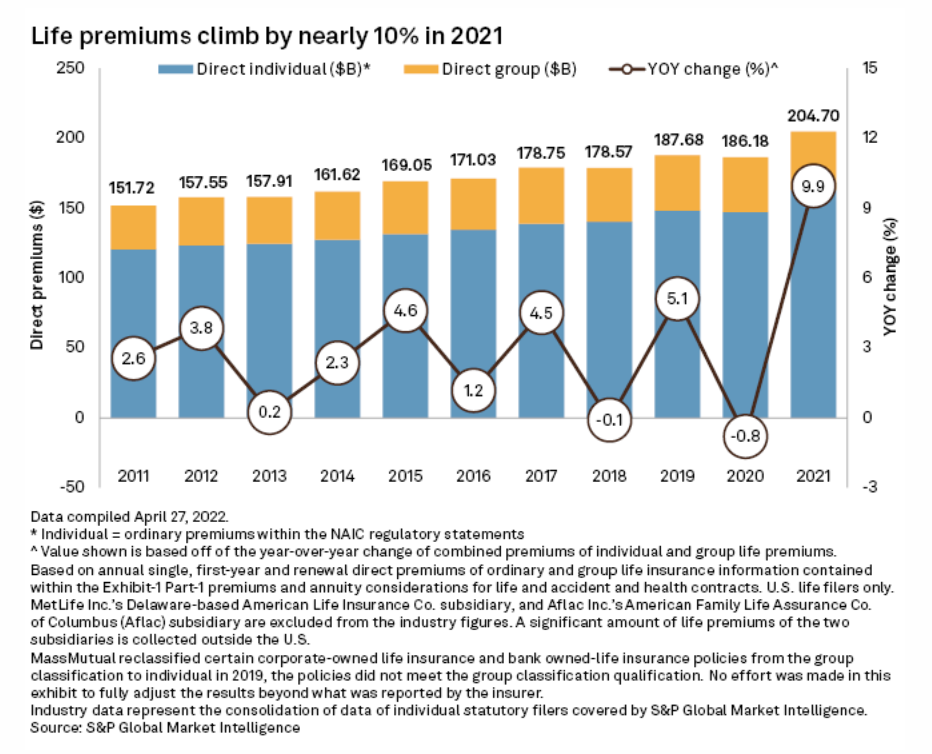 U.S. life insurers saw their yearly direct life insurance premiums surpass $200 billion for the first time in history in 2021, according to an S&P Global Market Intelligence analysis of annual statutory statements. In aggregate, the combined group and ordinary, or individual, direct life premiums climbed 9.9% year over year to $204.7 billion in 2021. Industrywide, individual life premiums rose 10.7% to $162.76 billion from $147.01 billion in 2020. Premiums by policy type are only available net of reinsurance within the regulatory statements. For net premiums within the major individual product types, universal life saw the largest year-over-year growth at nearly 60%, followed by variable universal life at 23.8%. 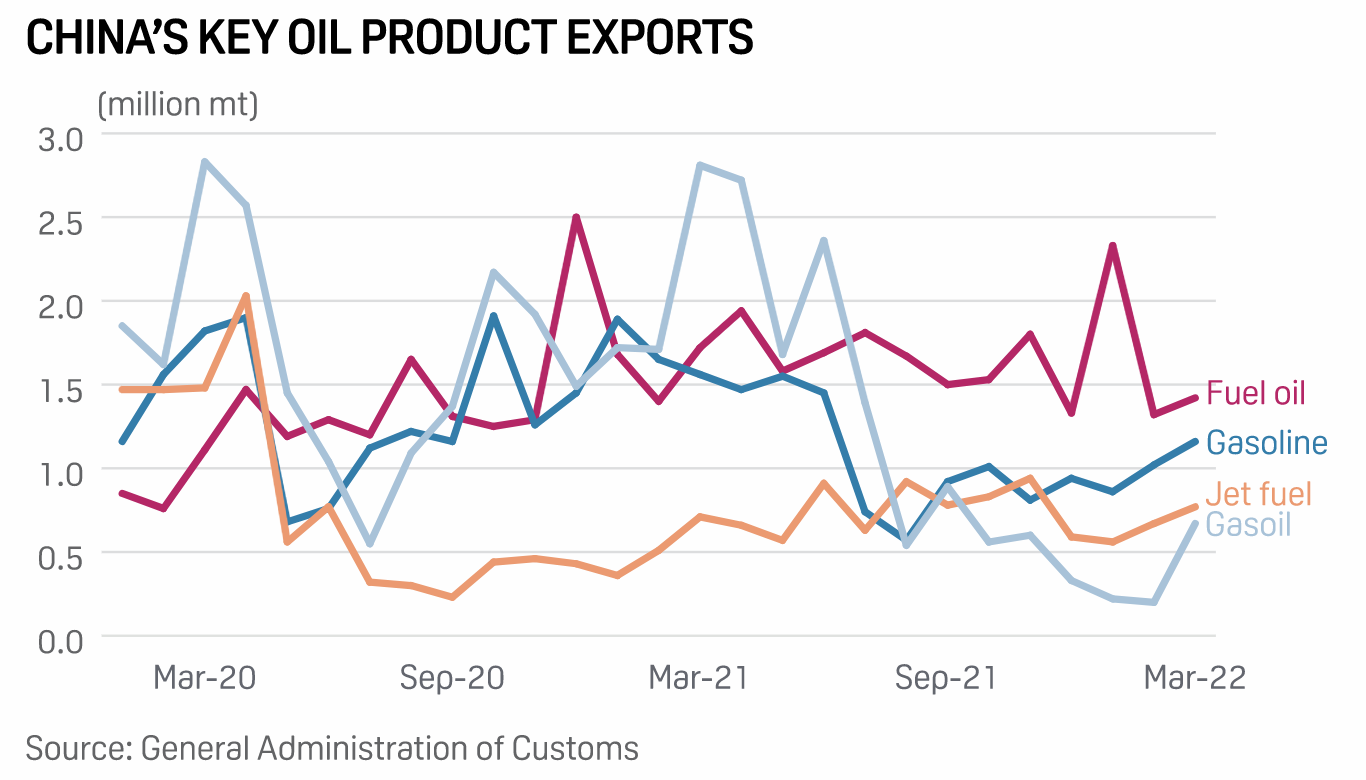 China is speeding up efforts to eliminate cargo exports of some transport fuels earlier than the target of 2025 as part of its net-zero ambitions, a move that would increasingly limit the ability of the country's oil companies to influence the global products market, Beijing-based sources with knowledge of the matter told S&P Global Commodity Insights. While the strategy is part of efforts to move toward the net-zero target by 2060, sources said Beijing is working toward ensuring that the restricted oil export policy does not affect the supply of bonded bunkering fuel oil and bonded jet fuel for ships and flights going to international destinations, despite these supplies being counted as exports. 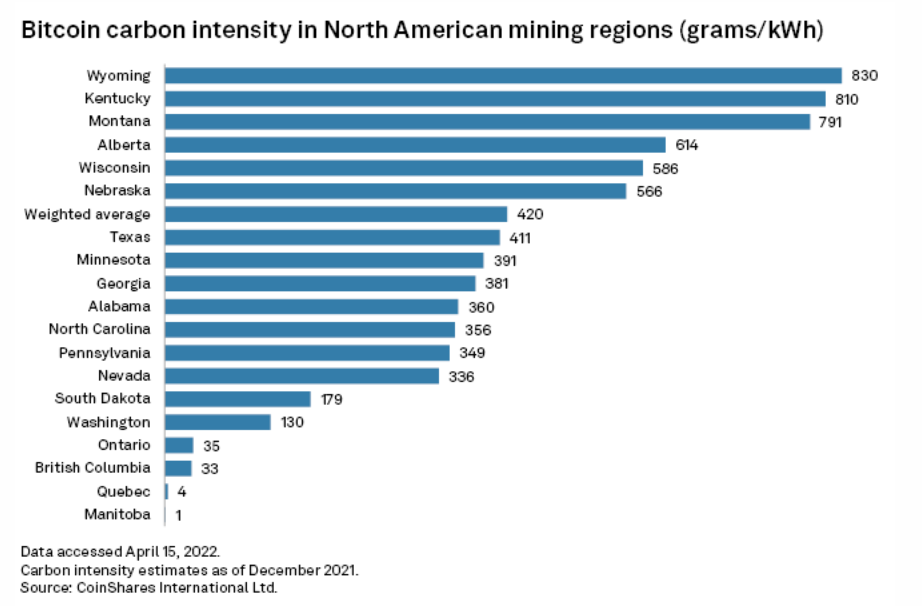 The 6 MW Hatfield Powerhouse and canal was the largest hydroelectric project in Wisconsin history when built in the early 1900s and was still supplying the local grid with clean energy in February 2022. That month, a cryptocurrency developer with green ambitions cranked up the first of 600-some bitcoin mining computers soon to be housed in containers on the banks of the Black River. Hatfield's new mission brought a slice of the $1.9 trillion digital currency industry to a rural Mid-Western town. The small hydro plant also represents a shift in the way energy-hungry companies mining for digital coins approach their power needs. 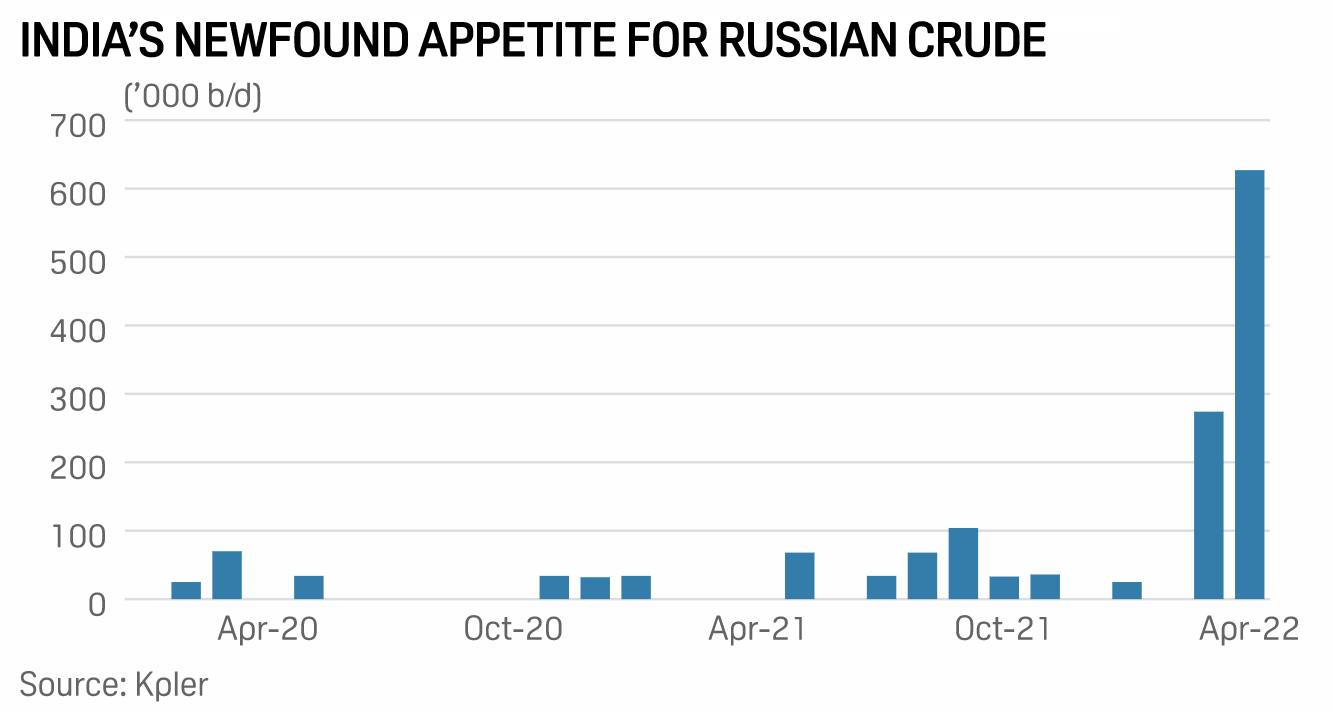 India emerged as the largest buyer of Russian Urals crude in April enticed by hefty discounts, as several of the grade's regular European customers have boycotted this oil following Russia's invasion of Ukraine. Urals has been trading at record-lows in recent weeks, with some deals being done at discount of almost $40/b to the Platts Dated Brent crude oil benchmark. Around a quarter of Russia's seaborne crude exports of the medium sour Urals in April is poised to travel to the South Asian country, according to trading sources and ship tracking data. 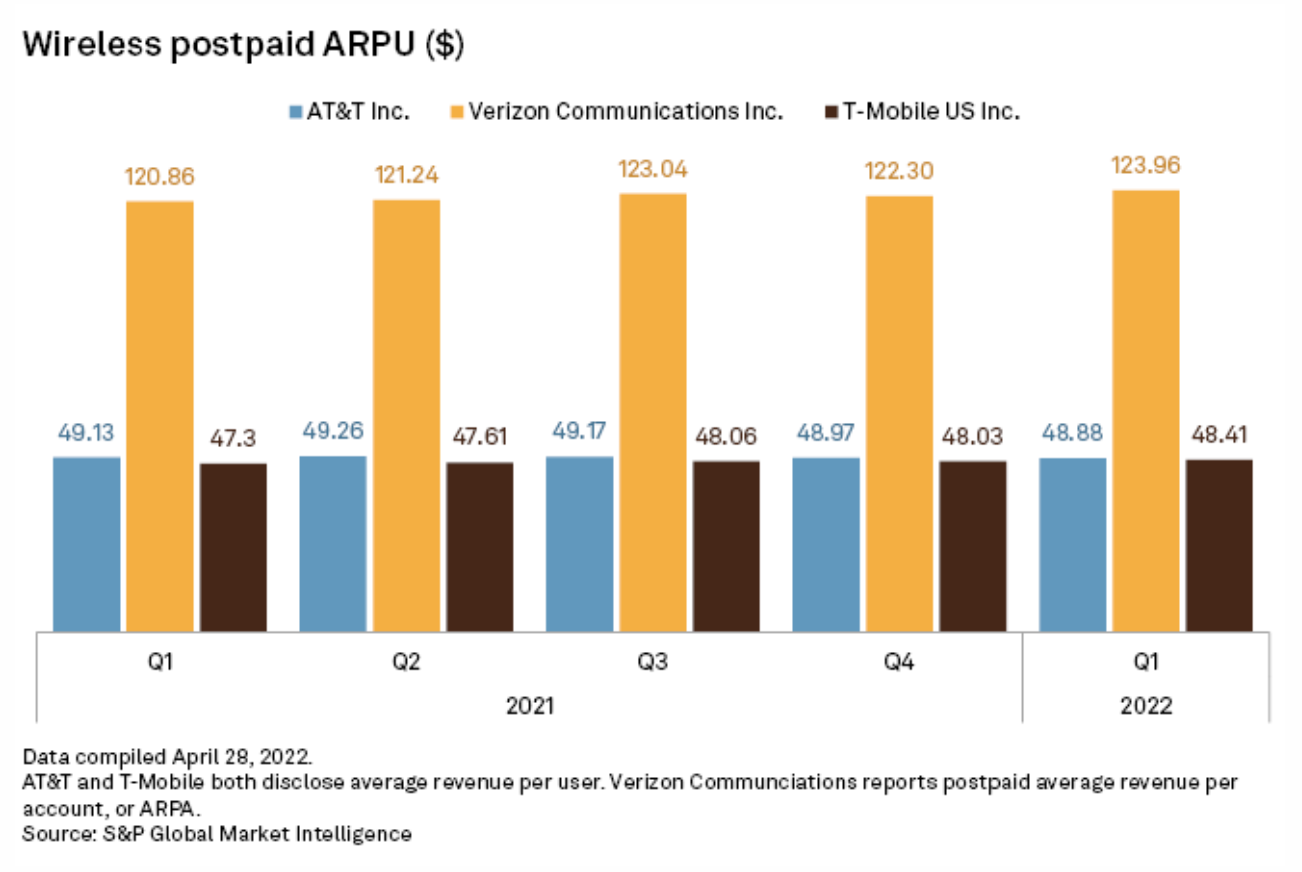 Some AT&T Inc. customers will pay more when the company soon adjusts older wireless plan prices, which have not seen an increase in three years, according to an AT&T spokesperson. The company is encouraging customers to upgrade to newer plans that offer additional features and, in some instances, a lower monthly cost, the company wrote in an email to S&P Global Market Intelligence. This announcement comes after AT&T executives discussed the need to raise customer prices to adjust for inflation during its April 21 earnings call. AT&T CEO John Stankey indicated the company may raise plan prices to help offset higher expenses, including growing labor costs.