Amazon’s move to buy MGM Studios for $8.45 billion and AT&T’s plans to merge its Discovery and Warner Media assets into one conglomerate indicate that technology and media are transforming, integrating, and innovating—fast.

Although analysts believe that Big Tech's booming growth could soon be tempered by the evolving digital advertising landscape and forthcoming regulation, technological disruption is the driving change agent for businesses, their competitive and industrial dynamics, and capital markets that fund growth. Media—including broadcast, cable, cinema, direct “over-the-top” service, and telecom—are creating the culture of the future. Together, the synergy between tech and media is creating a new playing field for content, consumer behavior, and consumption.

Amazon’s MGM acquisition could signal future interest in other film studios. Some market observers see this as part of a larger move into the movie studio space on the part of the e-commerce company to expand its streaming library. If the deal is approved, Amazon would add a powerful roster of film titles to Amazon Prime and situate itself as a stronger competitor against The Walt Disney Co., Netflix, AT&T, and other streaming rivals.

"With Netflix and Disney now getting a lot of traction, they recognize that to be a formidable long-term player, they needed to do something," CFRA Research media and entertainment analyst Tuna Amobi told S&P Global Market Intelligence. "Buying a studio might be the ... solution for them to at least get some scale that will enable them to boost their offering on Prime Video.”

"It wouldn't surprise me at all if they were looking at other properties, other studios as well … If Amazon wants to remain a relevant player in live streaming video, they have to expand their content library. They have done a nice job producing some material in house, but frankly, it just wasn't enough,” Morningstar analyst Dan Romanoff told S&P Global Market Intelligence. The price of the purchase is considered high by market observers but "in the tech world, it's just not huge ... But it does show that they are willing to make a splash. They are willing to spend some money and invest in strategic areas of their business."

AT&T’s ambition to combine its Warner Media entertainment, sports, and news operations with its lifestyle network, Discovery. ,indicates how other tech players are taking action. Coming less than three years after AT&T fought against regulators to win approval for its Time Warner acquisition, analysts expect this move to face similar scrutiny but again gain approval.

If approved, the deal would create a new cable conglomerate. The newly formed Warner Media-Discovery company would have 32 basic cable networks under management and a more than 31% share of the U.S. basic cable network advertising revenue market, according to S&P Global Market Intelligence.

Not all tech and media deals have been successful. But the potential combination of Amazon and MGM, and WarnerMedia and Discovery Inc. under AT&T, respectively, could be the "tip of the iceberg" for content acquisitions and consolidations among tech companies, Wedbush Securities analyst Daniel Ives told S&P Global Market Intelligence. "Right now, we are seeing Amazon, Apple, among other tech giants, go after these assets.”

Mr. Ives told S&P Global Market Intelligence that he expects Apple to also acquire a major Hollywood studio in the next six to nine months.

Today is Thursday, May 27, 2021 and here is today’s essential intelligence. 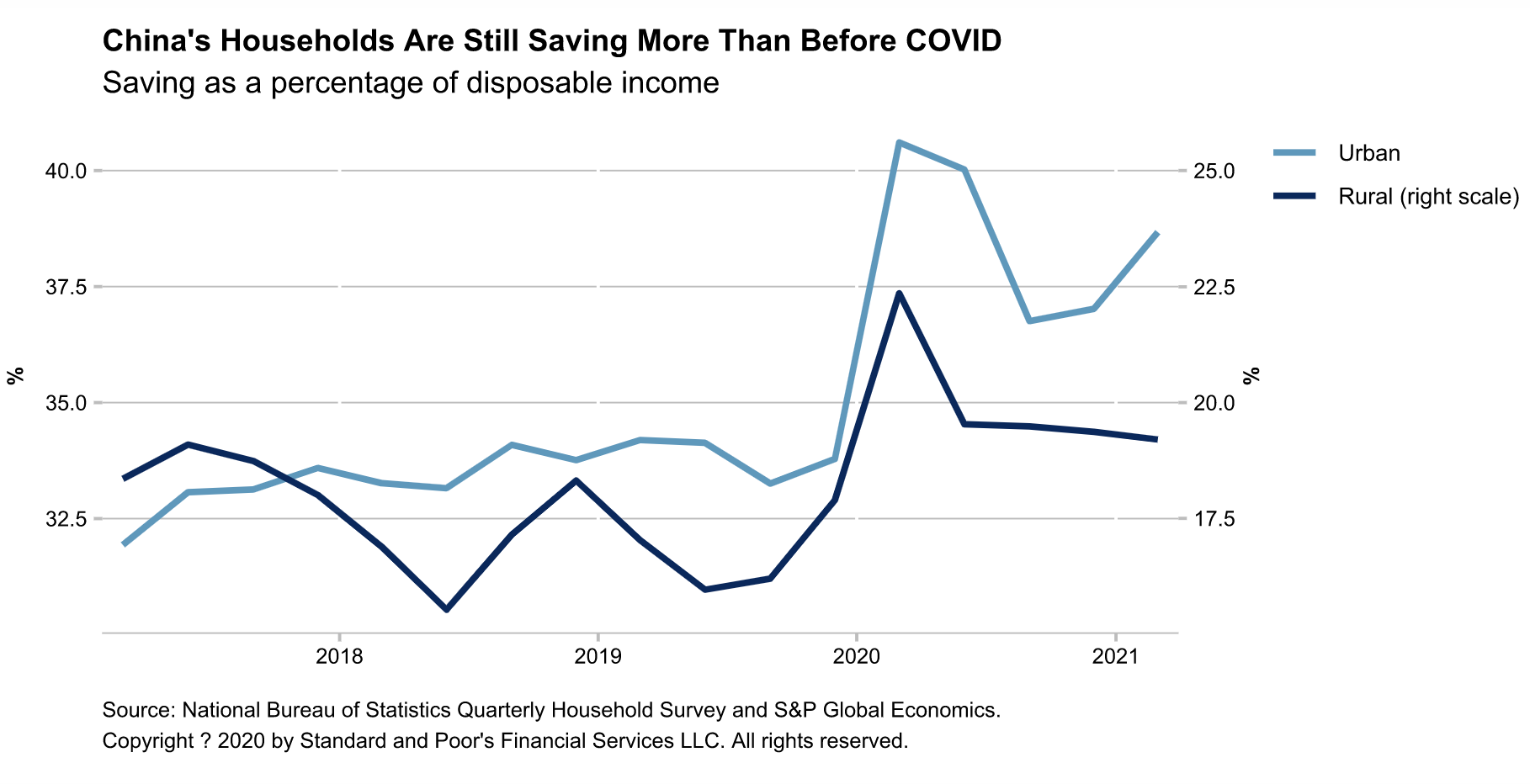 Over a year after China contained COVID, consumers are still saving more of their income compared with before the pandemic. Higher saving is being plowed into property, especially by middle-income households, driving up sales, prices, and new real estate investment.

Rising Stars Hit Highest Monthly Total Since Before The Pandemic 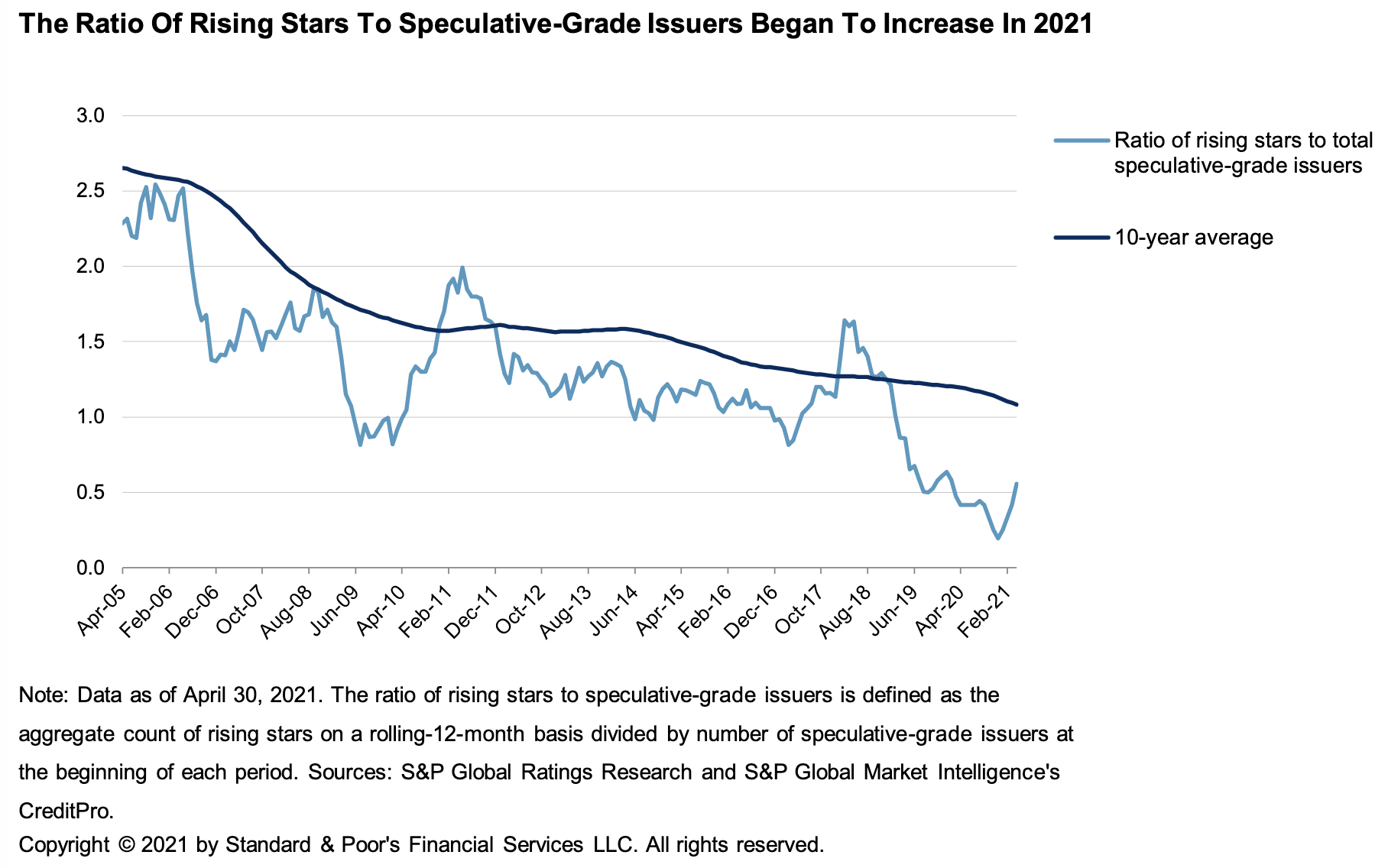 Five new rising stars were upgraded in April--the most in any month since late 2019. Even with these upgrades, the number of potential rising stars continued to increase, with six issuers added to the list.

The U.S. Speculative-Grade Corporate Default Rate Could Fall To 4% By March 2022

The European Speculative-Grade Corporate Default Rate Could Fall To 5.25% By March 2022 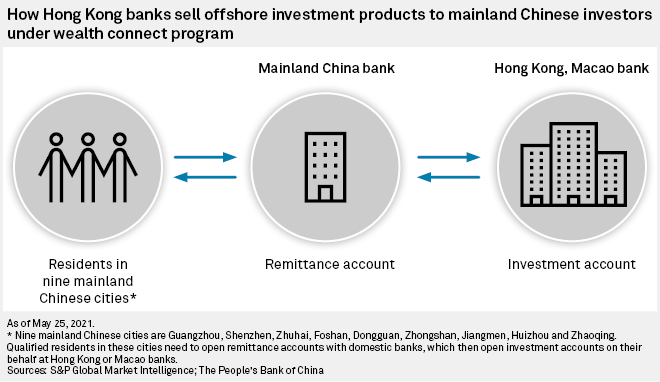 A program that allows banks in Hong Kong to sell offshore wealth management products in some of the wealthiest cities in southern China is set to become a new growth source of fee income and client base for lenders from the relatively small and mature market.

How The Economy, Profitability, And Regulations Could Support Certain U.S. Bank Ratings

S&P Global Ratings has observed positive developments in the U.S. banking system, related mostly to the country's improved regulatory track record for banks, the good financial performance of its banks prior to and during the COVID-19 pandemic, and the rebounding economy. 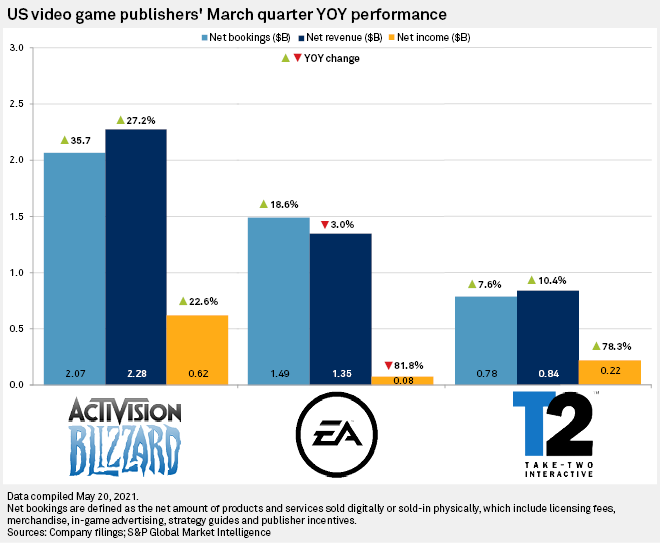 Activision Blizzard Inc., Electronic Arts Inc. and Take-Two Interactive Software Inc. all beat earnings expectations for the March quarter and forecast growth for the rest of the year, allaying concerns that demand for gaming would decline after the pandemic. While analysts cautioned that the industry may still experience a slight dip after shelter-at-home orders are lifted globally, they remain optimistic about the market's future overall. 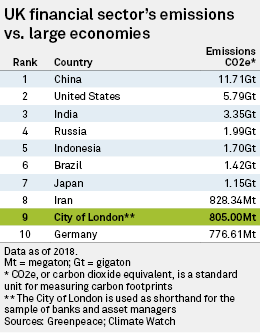 British banks are set to come under renewed pressure to curb fossil fuel financing after the International Energy Agency warned that energy companies must stop all new oil and gas exploration projects in 2021 to meet climate change targets. The financing of polluting industries is becoming an increasingly important issue for bank shareholders with lenders also facing scrutiny from governments, regulators and environmental campaigners. The British financial sector is among the world's largest polluters and, if it were a country, would be in the top 10 emitters of carbon globally, according to environmentalists.

Amid The Push Toward Smart Cities, AT&T Gets Smarter About Climate Change

S&P Global Market Intelligence recently sat down with AT&T Director of Global Environmental Sustainability Shannon Carroll, who provided an update on the company's Climate Resiliency Community Challenge and discussed what is next for the company as it builds out its networks of the future.

Summer 'Shaping Up To Be A Challenge' For Much Of U.S. Grid, NERC Says

Getting economies aligned with the EU's 55% emissions-reduction target for 2030 will be a multisector juggle in which no single ball can drop, policymakers and energy leaders said at the Eurelectric Power Summit on May 25. While growing the renewables fleet is a key component, it is far from being the only solution.

Larger buyers of voluntary carbon credits looking to hedge against the risk of future price increases have been buying entire carbon projects, or large stakes in them, as soon as they are certified and able to issue credits. 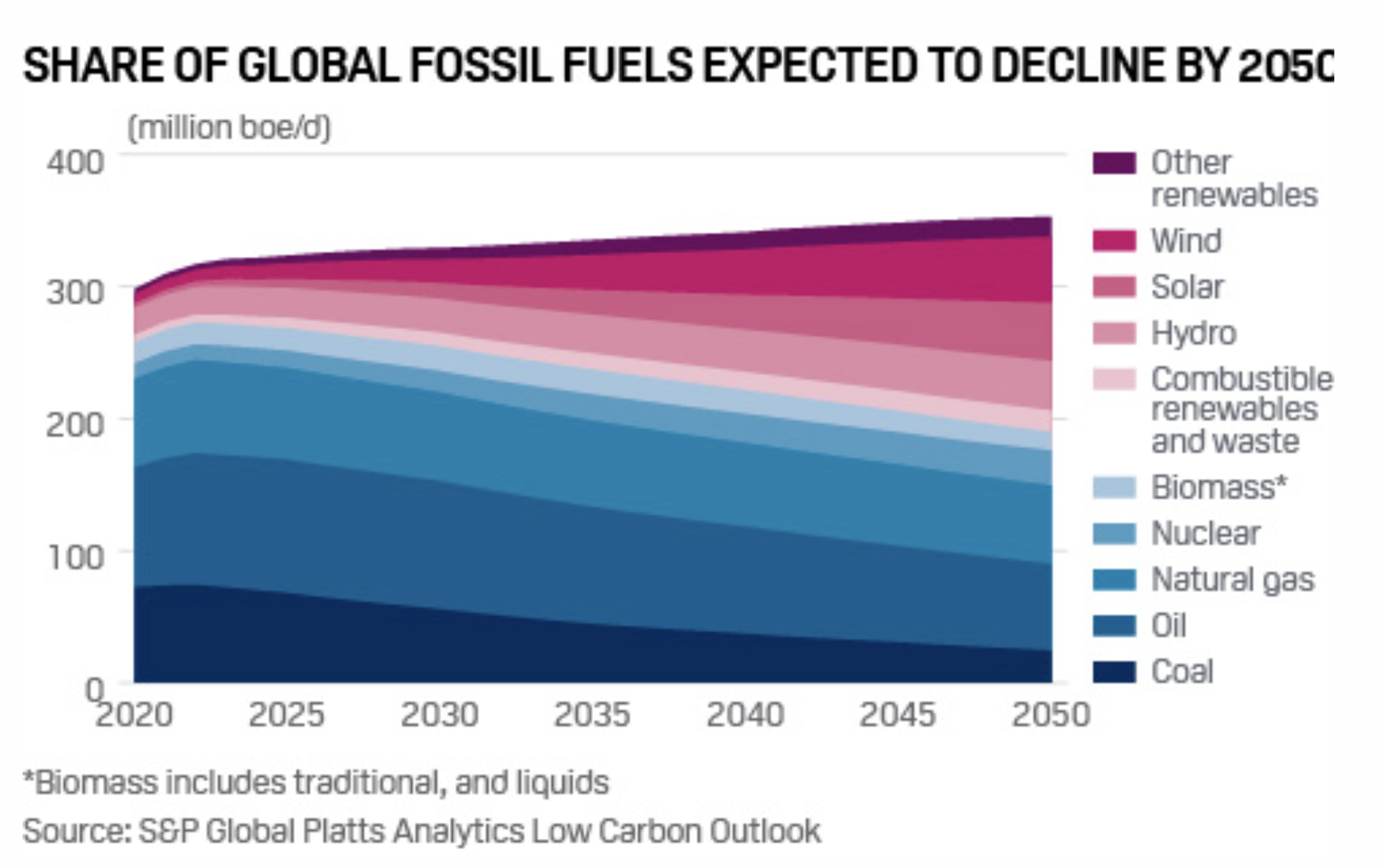 ExxonMobil and Chevron at annual meetings May 26 faced their strongest pushback yet from climate-focused investors urging the oil and gas drillers to "start facing the future" by shifting to lower-carbon technologies and preparing for sharply lower fossil fuel demand.

Net-zero emissions targets put forward by oil and gas companies offer a chance to hold major emitters to account but continue to face skepticism from researchers examining the robustness of the mounting pledges by countries, states, cities and companies around the world.

U.S. Senate Republicans opposed to the Nord Stream 2 gas pipeline will not likely gather enough support to reverse the Biden administration's decision to waive some sanctions on the project developer.