Against the backdrop of Russia’s invasion in Ukraine, along with the calamitous and irreversible impacts of climate change, the energy transition from fossil fuels to renewable energy sources could accelerate as the U.S. and Europe aim to reduce their reliance on Russian oil and gas.

Even without targeted sanctions on Russia’s oil and gas exports, the Russia-Ukraine military conflict has forced many countries to re-examine their energy security and major companies to re-evaluate their environmental, social, and governance (ESG) exposure. The U.S. is expected to block Russian oil imports and the EU is seeking natural gas supplies outside of the region’s dependence on Russia, while global energy majors like BP, Shell, and Equinor have exited both their operations and investments in Russia.

This geopolitical overhaul is developing as the climate crisis escalates. Despite mitigation efforts, climate change is causing "dangerous and widespread disruption” to the natural world and lives of billions of people globally—and if global temperatures rise by 1.5 degrees Celsius, the world will face “unavoidable” and “irreversible” implications over the next two decades, according to the latest report the United Nation’s Intergovernmental Panel on Climate Change.

"We have to view this through the ESG lens," Thierry Bros, a professor at the Institute of Political Studies in Paris who specializes in energy and climate, told S&P Global Market Intelligence in an interview. "Companies that told us day in, day out that they were ESG-inclusive, green and all this—i.e., the BPs and Shells—they were not coherent [with investments in Russia]. They are facing incoherence, and they have to leave Russia overnight."

Some European renewable-energy developers already stand to benefit from these changing dependencies.

Europe’s pivot from Russia now could generate a trading relationship with the U.S. for liquified natural gas, which many market participants see as a bridge fuel between dirtier hydrocarbons and clean renewables.

"Until the crisis, the U.S. wasn't really seen as a solution to Europe's energy problems—it has perpetuated their dependence on imports and perpetuated the use of hydrocarbons as Europe is trying to move toward a more decarbonized energy mix," Jason Feer, head of business intelligence at the oil, gas, and shipping intelligence firm Poten & Partners said, according to S&P Global Market Intelligence. "There may be a rethinking of the U.S. role and the role of hydrocarbons in Europe as a result of the war."

"There's been so much pressure on green gas and ESG and there's been a kind of wait-and-see approach on what the Biden Administration will do," Leslie Palti-Guzman, co-founder and CEO of the energy trade intelligence firm GasVista, told S&P Global Commodity Insight. "The market signals are there … If investors want to come back and back up U.S. shale gas, there's plenty of it there."

Still, risks to this silver-lining outcome remain. Even if global temperatures warm to 2 degrees Celsius by 2050, the share of oil and gas in the global energy mix will dramatically decline—but not completely disappear—as renewable energy generation significantly increases, according to S&P Global Commodity Insight.

"You can't simply close down use of oil and gas overnight, even from Russia," U.K. Prime Minister Boris Johnson said yesterday during a televised press conference. "It is not something every country around the world can do. We can go fast in the U.K., other countries can go fast, but there are different dependencies. "

Today is Tuesday, March 8, 2022, and here is today’s essential intelligence. 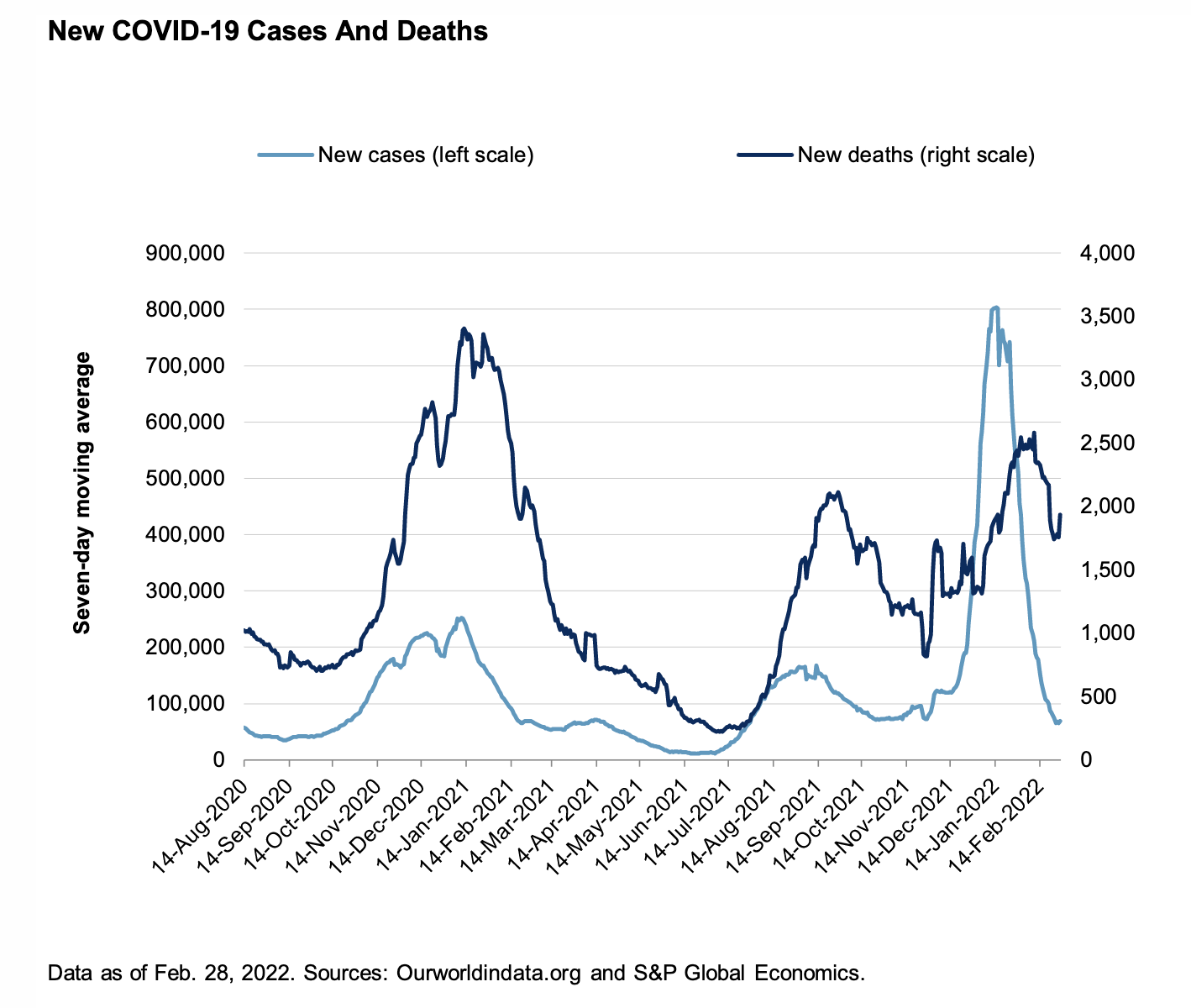 The massive drop in U.S. omicron cases through Feb. 28 echoes relatively healthy economic data reported by S&P Global Economics' U.S. real-time data tracker. If the public health situation in the U.S. keeps improving, the economic outlook this year could be solid overall. As new cases continued to plummet through February, economic activity picked up dramatically for the month, emphasized by the Bureau of Labor Statistics' impressive job market reports for the month. This continues to highlight strong U.S. economic activity, as the U.S. drives on to higher ground with the pandemic in its review mirror. 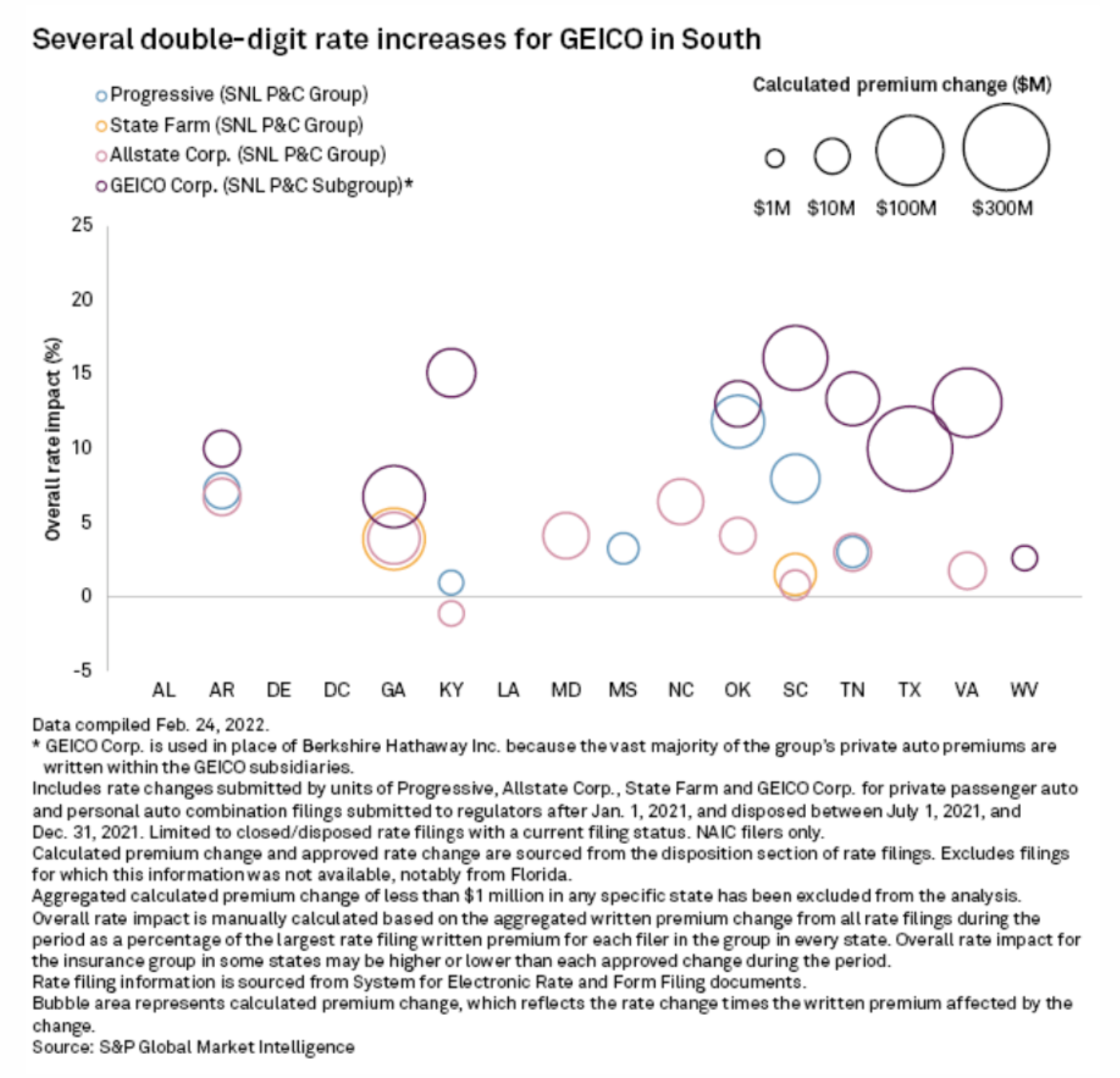 The four largest U.S. personal auto insurers received approval for substantial rate increases during the last six months of 2021 as the industry continues to try to offset rising loss trends. Of those big four auto insurers, hikes approved in the second half of 2021 for the subsidiaries of Berkshire Hathaway Inc.'s GEICO Corp. could potentially lead to the largest calculated premium gain, with an estimated increase of $1.06 billion, according to an S&P Global Market Intelligence analysis. 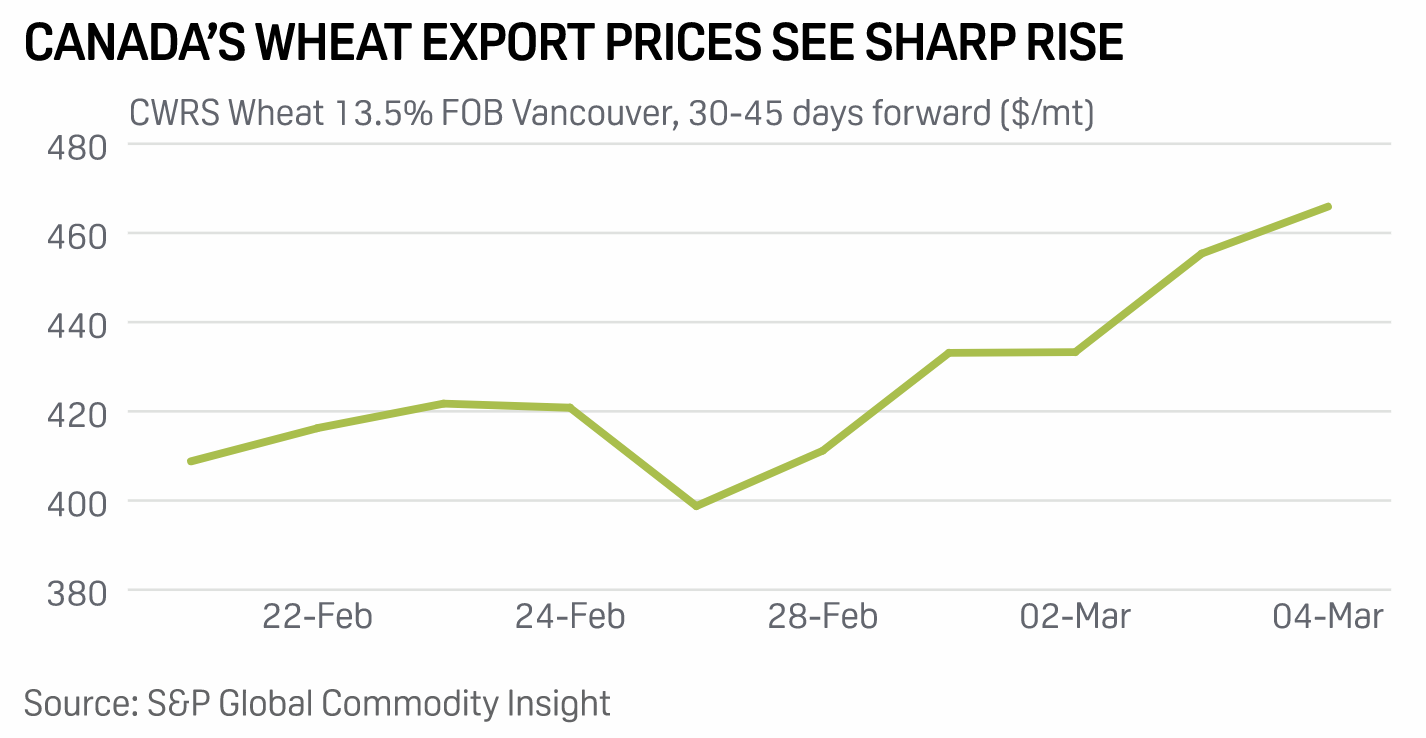 Canadian common wheat exports rose nearly 34% on the week to 281,600 mt in the week ended Feb. 27, Canadian Grain Commission data released March 6 showed. Common wheat exports for the marketing year 2021-22 (August-July) through Feb. 27, however, remained sharply lower on the year. From Aug. 1, 2021, through Feb. 27, 2022, Canada shipped 6.9 million mt of common wheat, down 39.6% from the same period in MY 2020-21. The rise in exports of the food grain during the week to Feb. 27 was due to an increase in the demand for the Canadian crop as Russia invaded Ukraine and the shipments from Black Sea came to a near-halt, traders said.

Listen: How The U.K.’S Approach To Women On Boards Is Improving Gender Diversity

In the latest episode of the ESG Insider podcast, Denise Wilson, chief executive of the FTSE Women Leaders Review, describes how the decision to routinely and openly publish data naming and shaming companies that fall short of suggested gender-balance targets has acted as a nudge, persuading more businesses to appoint female board directors to meet growing investor and societal expectations on diversity.

Essar Seeks Alternatives To Russian Diesel In The U.K. Amid Outcry Over Shipments 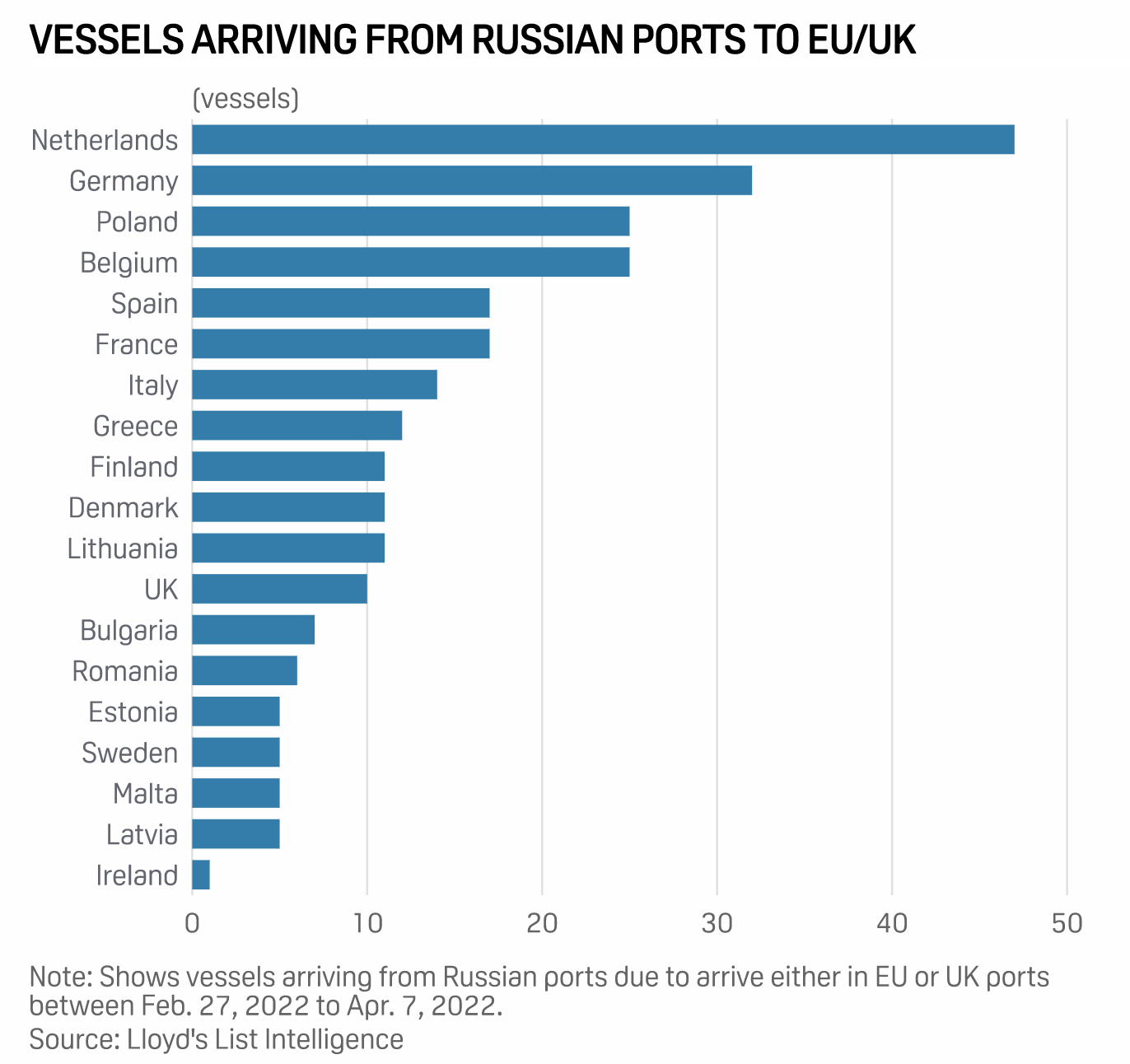 Essar, the owner of the U.K.'s 205,000 b/d Stanlow refinery, is looking for alternative sources of diesel to supply its U.K. retail fuel network as pressure mounts on companies to cut ties with Russia over its invasion of Ukraine. Last week, Essar said it turned away two cargoes of non-Russian origin crude, which would have been delivered in Russian-flagged tankers after the U.K. banned vessels on March 1 that are Russian-owned, operated, controlled, chartered, registered, or flagged from U.K. ports. But the restrictions do not include Russian cargoes carried by other vessels. 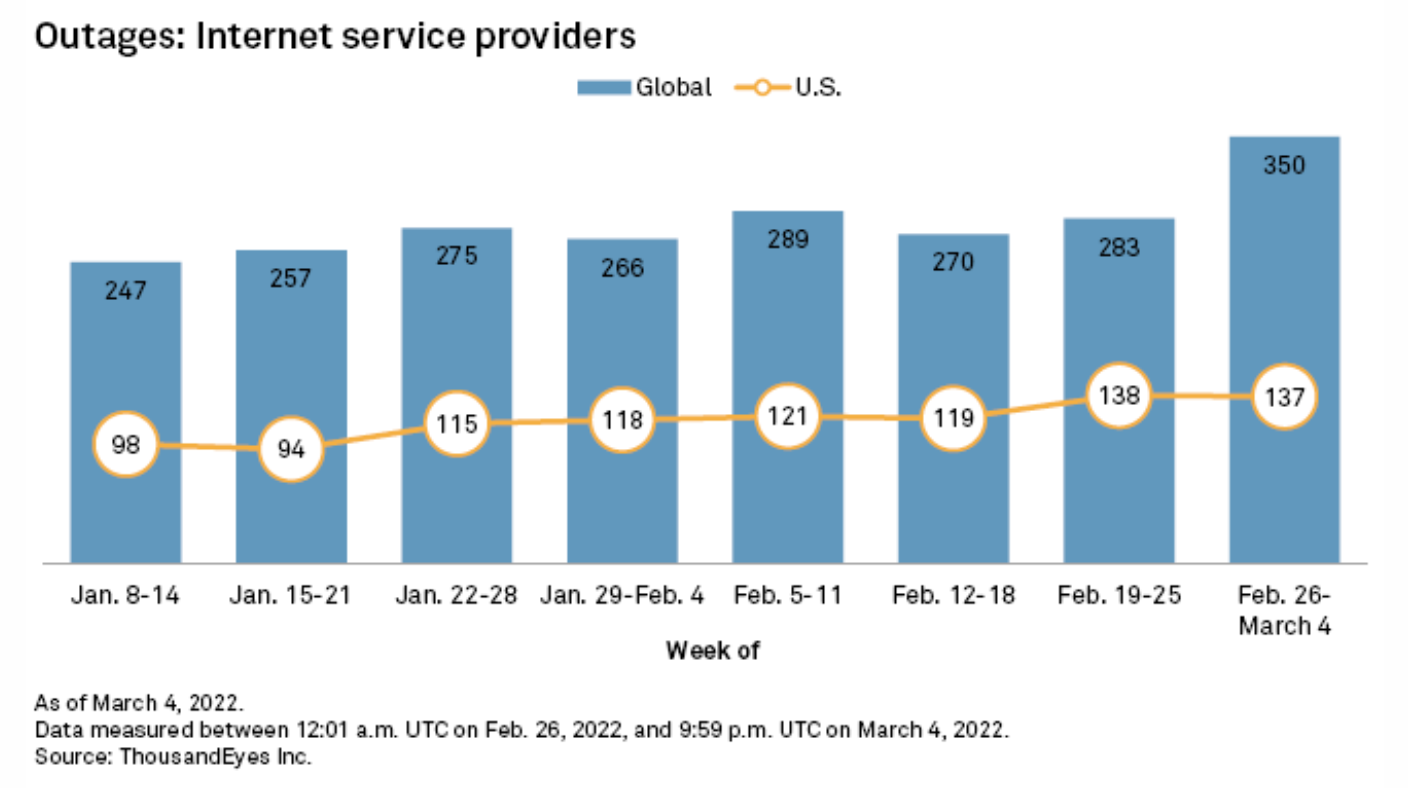 The number of global internet outages grew for a second consecutive week in late February, according to data from ThousandEyes, a network-monitoring service owned by Cisco Systems Inc. Total outages jumped by 24% to 350 in the week of Feb. 26, up from 283 the prior week. Most of the additional outages occurred internationally. In the U.S., outages remained relatively unchanged week over week, with 137 recorded the week of Feb. 26. U.S. outages comprised 39% of all global disruptions in the most recent week, down from 49% the week prior.