Some energy majors are exiting their operations in Russia, but Western economies have yet to specifically sanction Russian oil and gas—calling into question how global energy flows will be affected by the consequences of Russia’s invasion of Ukraine.

Sanctions on Russia levied by the U.S., EU, Japan, and other economies have disrupted energy and commodities trade flows, despite the penalties not directly targeting such goods. Still, Russia’s position at the epicenter of global oil and gas markets—as a leader within the OPEC+ alliance, and a main exporter of oil to China and the U.S. and natural gas to Europe—puts soaring energy and commodity prices at risk. Removing some of Russia’s major lenders from the Society for Worldwide Interbank Financial Telecommunications (SWIFT) messaging service could affect some crude trade and flows, and has already made global buyers more hesitant to purchase Russian oil and other commodities.

Today, the International Energy Agency will hold an unprecedented ministerial meeting to discuss the impact of Russia's invasion of Ukraine on global oil supplies and how its members can help stabilize oil markets. Russian President Vladimir Putin will also hold talks with Abu Dhabi's Crown Prince Mohammed bin Zayed to discuss OPEC+ strategy ahead of the oil cartel’s meeting to decide output quotas.

“We believe prices will remain elevated in the near term and are raising our S&P Global Ratings price assumptions for WTI and Brent oil, as well as for Henry Hub and AECO in 2022-2023, and for TTF in 2022-2024. While in our view the Russia-Ukraine conflict remains the biggest risk to oil and gas prices, we believe underlying global supply and demand fundamentals have strengthened in recent months and will support higher near-term prices regardless,” S&P Global Ratings said in its report raising near-term oil and gas price assumptions today. “However, conflict-related interruptions to Russian oil and gas exports, whether from sanctions, cyber-attacks on infrastructure, or Russia withholding volumes, could result in further price spikes and we expect significant near-term price volatility as the conflict evolves.”

“Energy and commodity markets will be ensnared in the web of sanctions and actions/reactions that unfold in the coming days and weeks, with far-reaching impacts across supply, demand, and global trade flows. A best-case scenario wherein energy flows remain largely shielded from ramifications is increasingly low likelihood,” IHS Markit’s Energy Advisory, now part of S&P Global, said in a recent note. “More severe Western sanctions will likely lead to some degree of disruptions in oil flows, even if the export of Russian crude oil and products is not targeted. Concern about running afoul of sanctions could lead to great caution on the part of financiers and buyers of oil. Independent of other factors, there will be transactional costs as traders and consumers reassess trade risks.”

While pressure is growing for major economies to limit Russian oil and gas exports in response to its invasion of Ukraine, analysts still consider this escalation of Western sanctions as unlikely given the potential for global economic damage. Crude oil prices spiked above $100 per barrel in intraday trading on Feb. 24 at the onset of the invasion, reaching the highest levels seen since 2014. But it could "eventually prove untenable for Western nations to continue to publicly exempt energy transactions, in order to shield their domestic consumers" if there are high civilian casualties or if Ukrainian President Volodymyr Zelenskyy makes a compelling appeal for such an action, Helima Croft, head of global commodity strategy at the investment bank RBC Capital Markets, told S&P Global Commodities’ Insight.

European countries are scrambling to reduce their reliance on Russian gas. Meanwhile, Russian oil tankers have continued to deliver products without interruptions to the U.S. against the sanctions backdrop, according to S&P Global Commodity Insights. Canada imposed an embargo on Russian oil imports on Feb. 28, becoming the first G-7 nation to sanction Russian energy directly. Officials at India’s government-operated oil company Indian Oil Corp. told S&P Global Commodities Insights that it has asked its crude suppliers to stop offering Russian and Kazakh crudes in order to avoid any payment and insurance risks caused by sanctions. Norway’s $1.3 trillion sovereign wealth fund announced will divest the totality of its investments in Russia.

Energy majors have already begun an exodus from their operations in Russia. Dutch giant Shell announced Feb. 28 that it will end its partnership with the Russian energy giant Gazprom and involvement in the Nord Stream 2 pipeline, following its rival BP—which announced its exit from its nearly 20% stake in Rosneft, Russia's largest oil producer, and that its CEO and former group executive will both resign from Rosneft’s board of directors. The Norwegian oil company Equinor said that it will start exiting from its joint ventures and all stop new investments in Russia. Now, Japanese companies are confronting pressure to review their energy connections in Russia, sources told S&P Global Commodities Insight.

Today is Tuesday, March 1, 2022, and here is today’s essential intelligence.

Listen: The Essential Podcast, Episode 55: Investing In Culture — Communication And Retention In Companies

Dr. Ben Michaelis joins the Essential Podcast to talk about communication and company culture and how things are changing during the era of the Great Resignation. The Essential Podcast from S&P Global is dedicated to sharing essential intelligence with those working in and affected by financial markets. Host Nathan Hunt focuses on those issues of immediate importance to global financial markets—macroeconomic trends, the credit cycle, climate risk, ESG, global trade, and more—in interviews with subject matter experts from around the world.

—Listen and subscribe to the Essential Podcast from S&P Global

The Pandemic Persisted In 2021 — And So Did U.S. Retailers And Restaurants 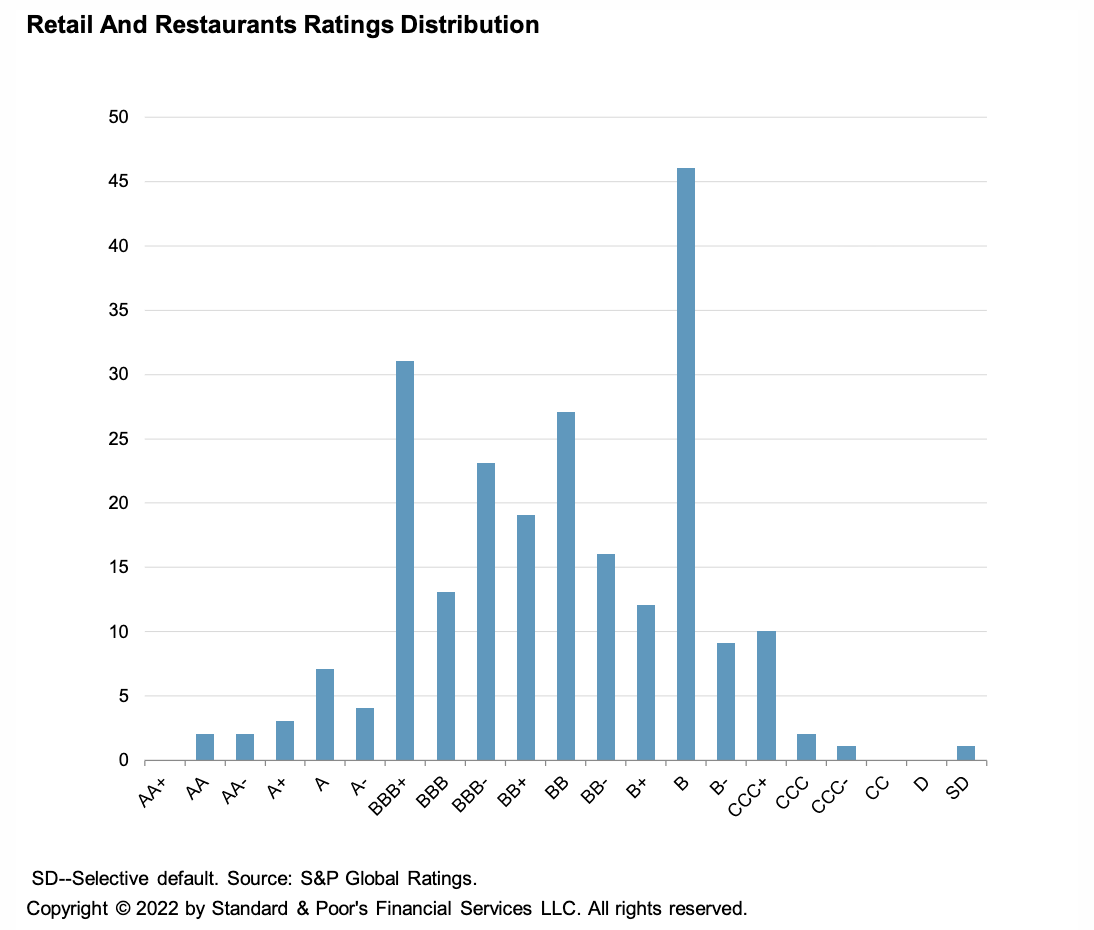 Despite supply chain bumps, rapidly rising inflation, and labor shortages, 2021 marked one of the most positive years for U.S. retail and restaurant companies from a credit ratings perspective. Specifically, the pandemic helped accelerate retailers' shift to online sales and provided an unexpected boost in pent-up demand last year to what was one of the most distressed sectors in U.S. corporate ratings pre-pandemic. The vast majority of rating actions in 2021 were positive and this trend has continued so far in 2022. S&P Global Ratings expects retailers will continue to report sustained elevated demand going into 2022. 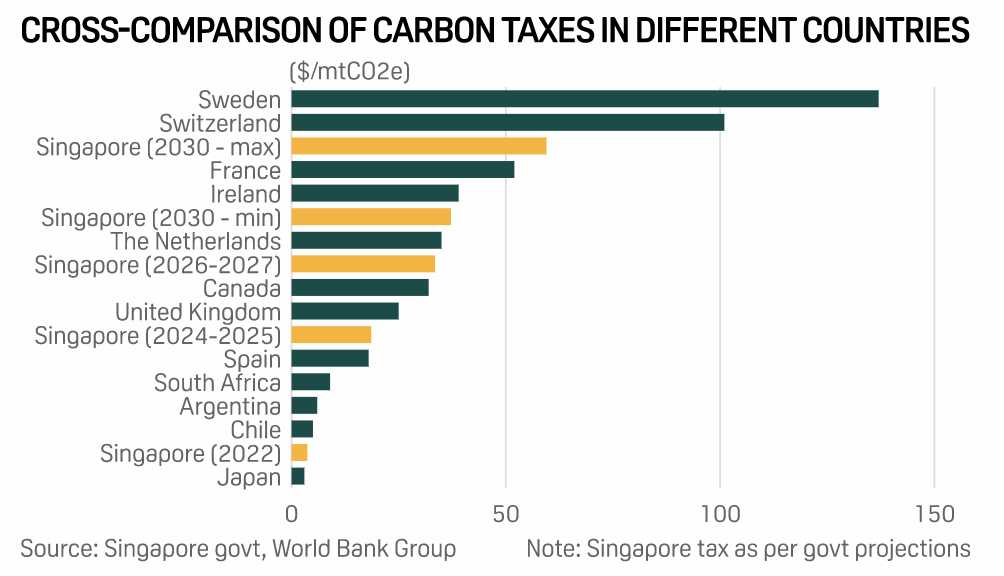 Singapore's plan to raise carbon taxes is expected to stimulate demand growth in the voluntary carbon credit market and facilitate price discovery, which will in turn pave the way for the financialization of carbon as well as promote cross-border carbon trading, industry experts said. The Singapore government recently announced plans to raise its carbon tax to S$25/mtCO2e (approx. $18.60/mtCO2e) in 2024 and 2025, from the current level of S$5/mtCO2e ($3.7/mtCO2e). Subsequently, the carbon tax will increase to S$45/mtCO2e in 2026 and 2027, and S$50 to S$80/mtCO2e by 2030.

Listen: How To Keep Pace With The Fast-Changing Landscape For ESG Regulation, Standards

At the GreenBiz conference, ESG Insider hosts Lindsey Hall and Esther Whieldon sat down with one standard setter to discuss the big developments afoot: Katie Schmitz Eulitt, director of investor relationships at the Value Reporting Foundation, formerly the Sustainability Accounting Standards Board, or SASB. They also talk with Kristen Sullivan, sustainability and ESG services leader at Deloitte. And to hear what all these changes look like in practice for companies, they sat down with Jaclyn Allen, director of sustainability at fashion company Guess.

Using satellite data from 2019 and 2020, a team of French and U.S. researchers created the first systematic estimate of large methane leaks that can only be seen from space. Senior editor Jasmin Melvin spoke with Antoine Halff, co-founder and chief analyst at Kayrros, a French data analytics company that supplied the data that the study was based on, about the prevalence and causes of oil and gas "ultra-emitters" and the climate benefits, as well as business opportunities, that could come from greater use of satellites to detect and address these emissions. 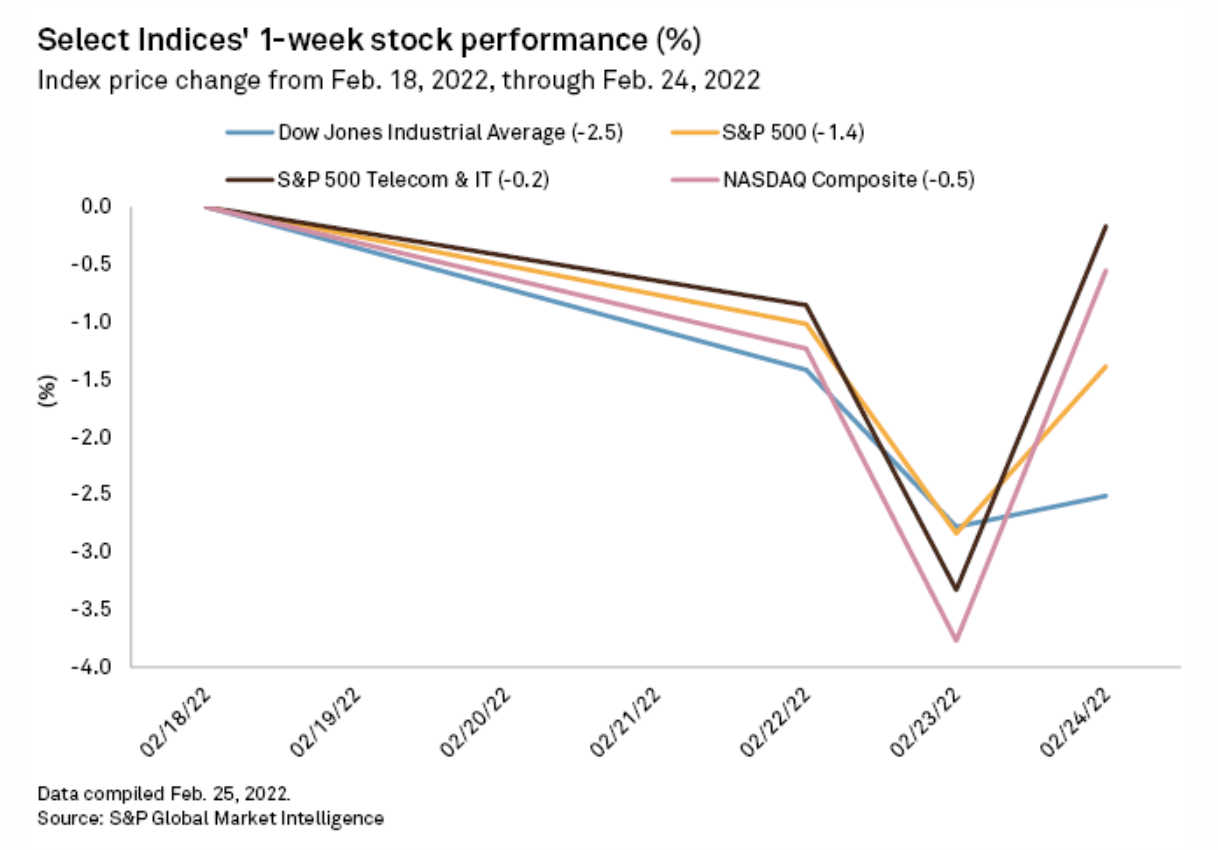 The U.S. is preparing for Russian cyberattacks as the conflict between Russia and Ukraine escalates, a fact that may spur cybersecurity spending in the near term. Tensions in Eastern Europe reached a boiling point this week after Russian President Vladimir Putin launched military operations in Ukraine on the evening of Feb. 23. U.S. President Joe Biden on Feb. 24 ordered sanctionsto be levied on Russia's financial institutions, military, and individual elites, following related moves from the United Kingdom and European Union. Those sanctions could prompt Russia to respond with cyberattacks on U.S. financial entities and infrastructure, national security experts said, and analysts say the threat of such attacks will drive further investments in the security landscape.