After devasting wildfires raged across California last summer and a polar vortex froze Texas this winter, market participants in both U.S. states are taking action to make their energy grids more resilient to climate risk.

Almost 60% of companies represented in the benchmark S&P 500 index and more than 40% of companies in the S&P Global 1200 index held assets at high risk from the physical impacts of climate change in 2019—with wildfires, water stress, heatwaves, and hurricanes or typhoons representing the greatest risks, according to S&P Global research. As scientists and climate experts anticipate climate events will escalate unless global warming is controlled to 1.5 degrees Celsius within the next decade, the associated costs of extreme weather will likewise intensify.

The North American Electric Reliability Corp., seen as the region’s electricity watchdog, said on May 26 that many parts of the U.S. face "elevated risk" of energy emergencies this summer due to a potential combination of extreme heat, droughts, wildfires, and tight energy-resource capacity, according to S&P Global Market Intelligence.

The wildfires scorched millions of acres in the American West and caused rolling blackouts that left communities without power as temperatures skyrocketed. The frigid temperatures in Texas this year left millions of people without heat and sent electricity prices soaring. Both events nearly caused system-wide energy failures. Extreme weather poses long-term problems as the physical effects of climate change accelerate, the question of how power systems will adapt is becoming more urgent.

"Climate change really presents a fundamentally different problem than electric utilities and others in the industry have had to deal with in the past," Romany Webb, a senior fellow at Columbia University's Sabin Center for Climate Change Law, said during a Federal Energy Regulatory Commission technical conference, according to S&P Global Platts. Such energy providers need to put thought into "new specialized planning processes that are better suited to dealing with climate change along the lines of ... more specific climate resilience planning," with the goal ultimately being to "have a better understanding of how these multiple climate impacts could occur simultaneously and affect multiple parts of the system, where those risks are and how they actually manifest," she added.

California regulators and the statewide grid provider California Independent System Operator have implemented myriad reforms to bolster reserves of precious power supplies to avoid a repeat of last summer’s events, meeting with a mix of praise and opposition. But changes will need to be put into effect fast. On May 12, the California operator warned that its power grid is still susceptible to stress during extreme heatwaves.

“Today, in advance of the 2021 wildfire season, it appears that California, for the second consecutive year, will receive below-average rainfall, indicative of drier-than-normal conditions. We believe that these dry conditions increase the susceptibility that a smaller wildfire may grow into a catastrophic wildfire,” S&P Global Ratings said in a report this week on the implications of the wildfires on utility credit conditions. “We also believe that the duration of the wildfire season may be increasing.”

"A top priority we had this legislative session was to fix the power grid to prevent any other grid failure in the future … The Legislature passed comprehensive legislation to fix all the flaws that led to power failure,” Governor Abbott said during the signing ceremony. "There's not greater accountability in the system than ever before with sweeping reform of ERCOT and the [Public Utility Commission of Texas], and more oversight by the Railroad Commission … Everything that needed to be done was done to fix the power grid in Texas.”

Today is Thursday,  June 10, 2021, and here is today’s essential intelligence. 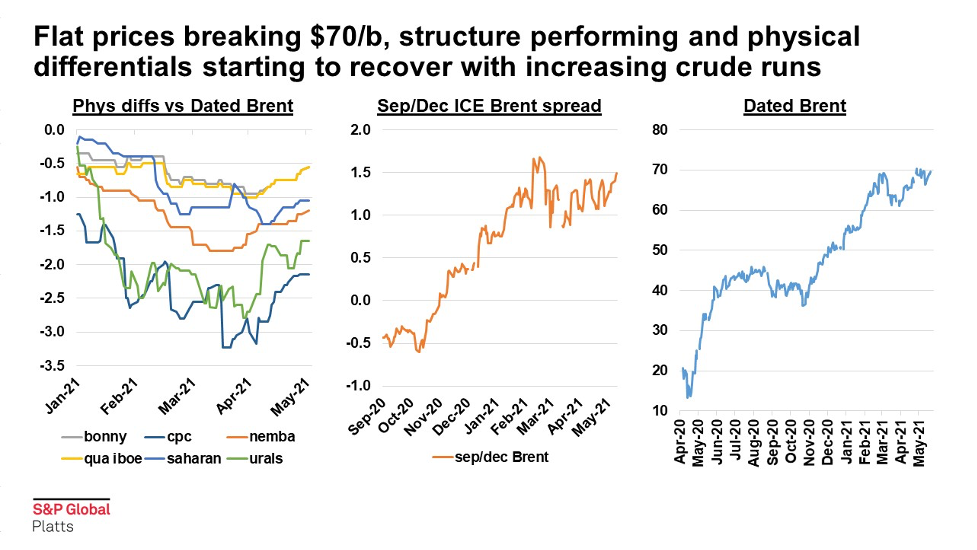 Crude runs will increase, ramping up more in the West than in the East, and this should create a tighter physical crude market over the next 30-60 days. S&P Global Platts expect physical differentials to be the last piece to move, as runs will go up and stocks will draw. Urals, for example is trading at Dated Brent minus $1.60/b from, up from minus $2.75/b at the recent lows.

Employing a flexible monthly futures contract rolling strategy, the S&P GSCI Dynamic Roll is designed to alleviate the negative impact of rolling into contango, to benefit from backwardation, and potentially to lessen volatility while offering investors liquid, broad-based commodity exposure. Contango and volatility are the most cited reasons why market participants tend to steer away from commodities, despite the potential inflation protection and diversification benefits of including commodities in a diversified portfolio. The S&P GSCI Dynamic Roll may help to mitigate these concerns.

U.S. state tax-supported debt, in the aggregate, continued to moderate during fiscal 2020, with marginal declines across some debt metrics compared to the previous year. Compared to the years following the Great Recession, this was rather restrained.

Corporate rating trends have improved dramatically in Europe since the height of the COVID-19 pandemic, when downgrades reached a high of 149 in second-quarter 2020. 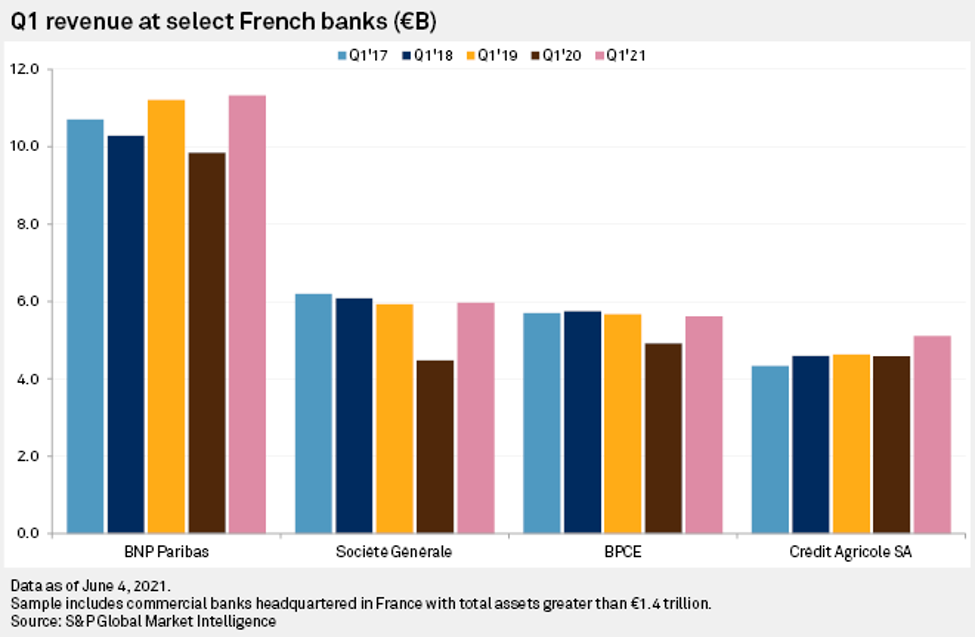 The first quarter of 2021 gave France's largest banks some cause for hope. After the unprecedented turbulence of 2020, BNP Paribas SA, Crédit Agricole SA, Groupe BPCE and Société Générale SA all saw a strong rebound in business activity in the first three months of the year.

As M&A In Japan Picks Up, Deal Advisory is A Bright Spot for Banks, Brokerages

During the first four months this year, 1,480 deals involving Japanese companies were announced, according to M&A advisory firm Recof Corp. It was up from 1,288 in the same period of 2020, as well as 1,443 in the first four months of 2019. On an annual basis, 2019 was the strongest year on record in Japan when 4,088 deals were sealed, before falling to 3,730 in 2020. As M&A transactions picked up in recent months after a lull in 2020 due to the pandemic, major Japanese financial institutions reported strong performance in fees from deal advisory for the fiscal year ended March 31.

A June 9 congressional hearing on the prospects for a central bank digital currency, or CBDC, is likely to address banks' fears that a CBDC could alter their traditional role in the financial system, analysts said. 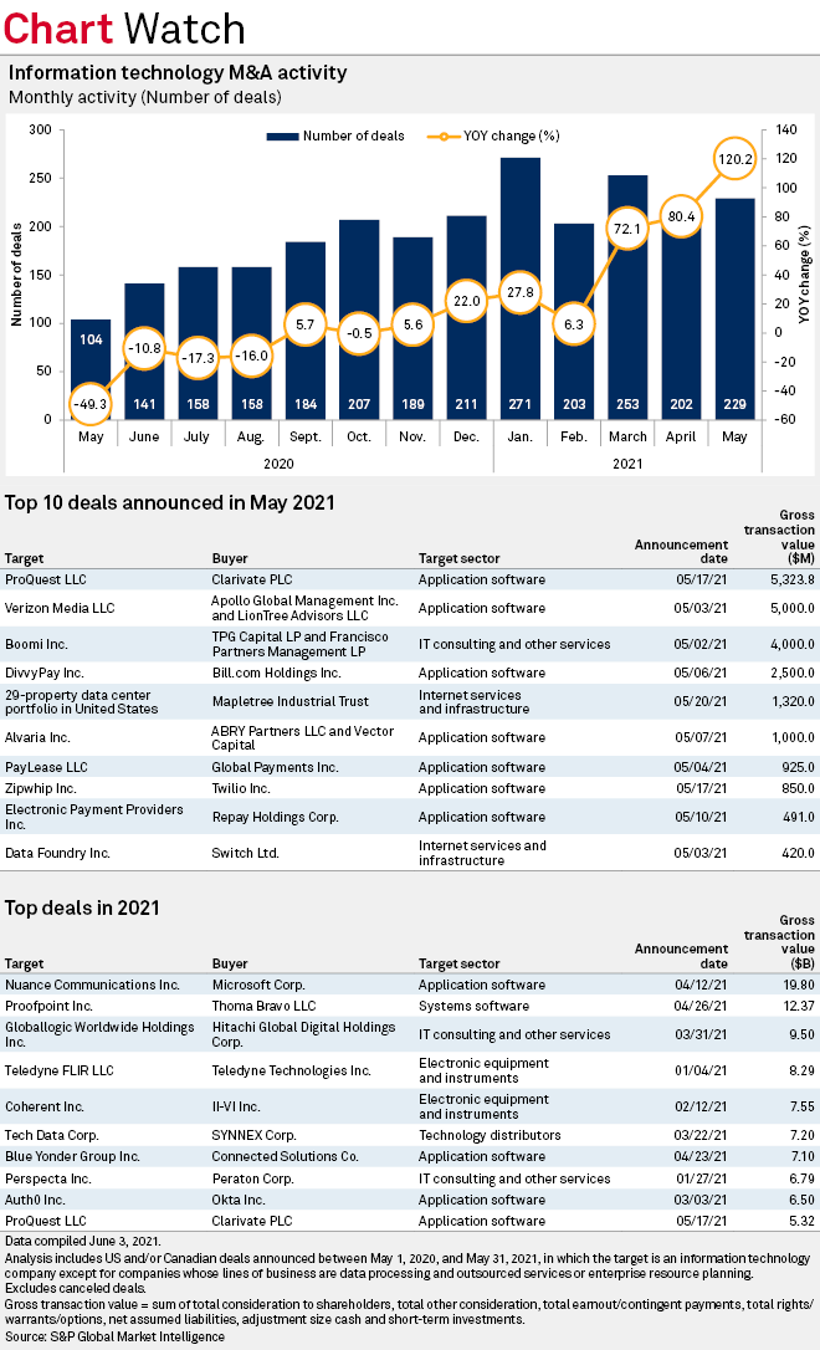 Deal volumes were up 120.2% year over year for the month, at about 229 transactions, according to data from S&P Global Market Intelligence. The same month in 2020 was particularly depressed, with deal markets reeling from the shock of the pandemic. However, the 2021 month also registered above 2019 deal volumes. 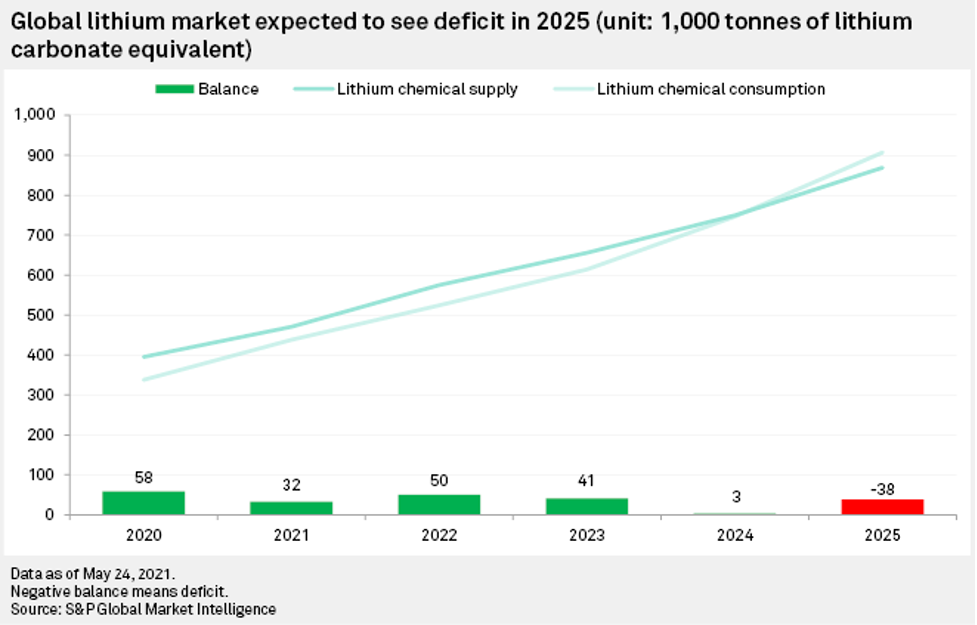 From the production of greener gasoline to lower-carbon plastics, bionaphtha is a versatile product poised to be key in the transition to a cleaner energy future. Driven by innovative technologies and emerging regulations, supply of, and demand for, bionaphtha are building across Europe, alongside the potential for a liberalized, transparently priced market.

Private companies and the US financial community will play a crucial role in pushing the energy transition forward as trillions of dollars will need to be invested in existing and new technologies to rapidly decarbonize the economy, officials and executives said June 8. On Platts Market Movers Asia with Associate Editor Rohan Gupta: A lack of clarity in OPEC+ production plans for August adds a layer of uncertainty to the Asian oil market as the region looks to revive its economy after a pandemic resurgence.

Many container shipping companies have been forced to draw contingency plans to mitigate supply chain disruptions stemming from operational delays in China as new COVID-19 related cases emerge in Shenzhen and Guangzhou.