After being delayed a year due to the coronavirus crisis, the Olympic Games kicked off in Tokyo on Friday with a series of firsts.

Due to the threat of COVID-19 and Japan’s current state of emergency, the opening ceremonies of the international event were broadcast to the world from a nearly empty stadium devoid of spectators beyond some 10,000 team personnel, members of the media, and global dignitaries permitted to attend for professional and diplomatic purposes. Protests persisted outside the Olympics and across Japan as polls estimated that roughly 80% of the Japanese population have been opposed to holding the Summer Games.

When record-holding tennis player Naomi Osaka of Team Japan lit the Olympic cauldron on June 23 in the official start of the Games, the flame was ignited not by the traditionally used natural gas or liquified petroleum gas. For the first time, the cauldron—which burns throughout the  16-day Olympics and has previously raised environmental concerns over its emissions footprint—will be powered by propane and supported by hydrogen, spokeswoman Yumiko Takeshita told S&P Global Platts.

Tokyo’s additional use of solar power-generated hydrogen to supplement some of the propane burned in both the flame relay torches and the cauldron "is one of a variety of initiatives that we hope will serve as a springboard to increase the demand for hydrogen energy and help create a full-fledged, hydrogen-based economy," Ms. Takeshita said.

The fanfare of the opening ceremonies and first few days of events hasn’t been able to compete with the COVID-19 crisis in Japan, where low vaccination levels have placed the population in danger. The postponement of the Olympics from summer 2020 to now has not outrun the risks associated with travel and large gatherings during the pandemic. Japan announced a state of emergency due to climbing COVID-19 cases from July 12-Aug. 22. The International Olympic Committee (IOC), alongside the Japanese government and local organizers, announced on July 8 that spectators would be banned from the Summer Games venues.

Canceling the Games outright would’ve added more than $1 billion in insurance claims on top of the $500 million to $1 billion already paid out for Olympics-related losses, Duncan Fraser, managing director for sports and entertainment at the insurance firm Howden Broking Group, told S&P Global Market Intelligence. Other market participants’ estimates put the potential cost for reinsurers at up to $400 million.

"The challenge at the moment is finding enough capacity in the marketplace for the mega events like the Olympic Games as the lines sizes for most insurers has reduced," Mr. Fraser said.

The Japanese public’s opposition to the Games has not gone unnoticed. Auto maker Toyota, a top-tier global sponsor of the IOC, said it would pull its Olympics-themed commercials in Japan due to the polarization, according to S&P Global Market Intelligence. Nonetheless, Toyota said it would continue to run such advertisements in its U.S. markets. On a macroeconomic level, the Tokyo Olympics may provide an additional boost to U.S. services imports, which includes purchases of television rights, that could help the country’s trade deficit reach a new record, according to Panjiva, part of S&P Global Market Intelligence.

Today is Monday, July 26, 2021, and here is today’s essential intelligence. 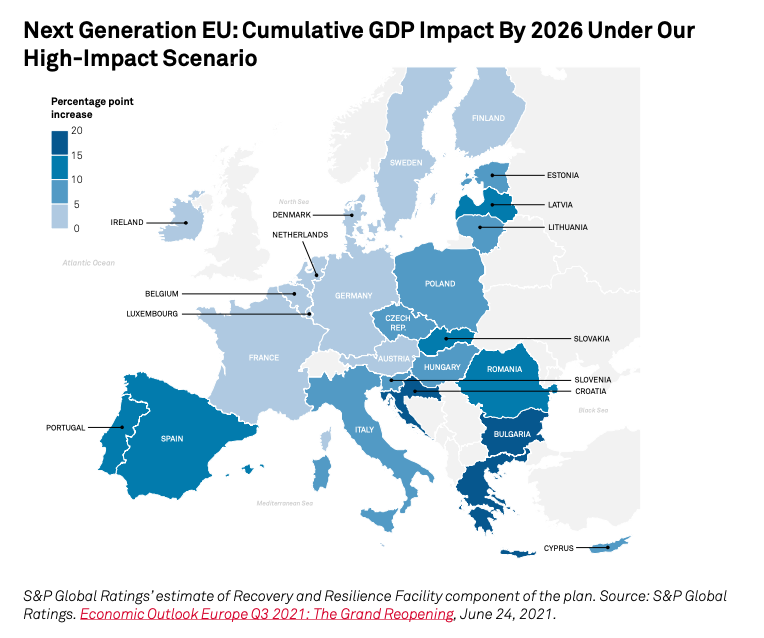 A forceful and swift policy response helped collateral performance since the onset of the pandemic. Overcollateralization and structural features will support covered bond ratings once these policies are scaled back. 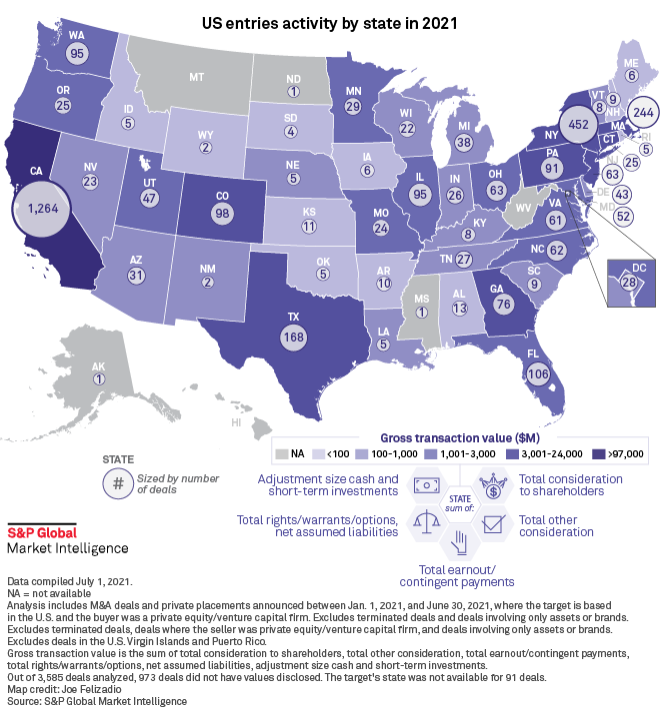 IT remained the most attractive sector for U.S. private equity and venture capital buyout firms in the second quarter, with 696 entries announced.

Netflix Stumbles After Earnings; AMC Jumps Amid Board Shuffle, M&A 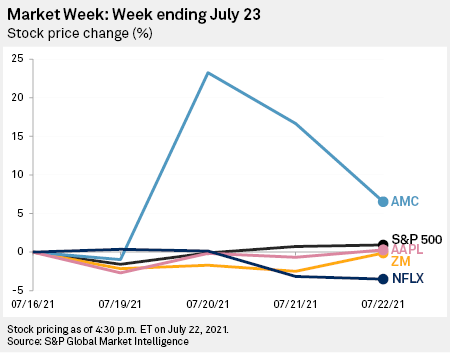 Select technology, media and telecommunications stocks were met with ups and downs this week as the year's second-quarter earnings season began.

Silos within the energy industry are coming down as companies confront the need to dramatically cut carbon emissions. The so-called energy convergence is the idea that companies, policy makers and regulators need to be more collaborative across the energy spectrum. Joe Brettell is a partner for strategic engagement at Prosody Group, which consults on energy, agriculture and financial services. S&P Global Platts asked him about the rising importance of US regulators, climate-related investor pressures, and the changing focus of the US energy capital Houston as it adapts to the energy transition.

—Listen and subscribe to Capitol Crude, a podcast from  S&P Global Platts

The UK government has further delayed its long-awaited hydrogen strategy, pushing back publication to an unspecified future date as the Department for Business, Energy and Industrial Strategy seeks to finalize a budget for related support measures, a member of the government's hydrogen advisory council told S&P Global Platts.

European sales of conventional gasoline and diesel vehicles by market share slumped sharply in the second quarter of 2021 as a growing appetite for battery-powered mobility continued to support sales of electric and hybrid cars, according to the European Automobile Manufacturers Association (ACEA). 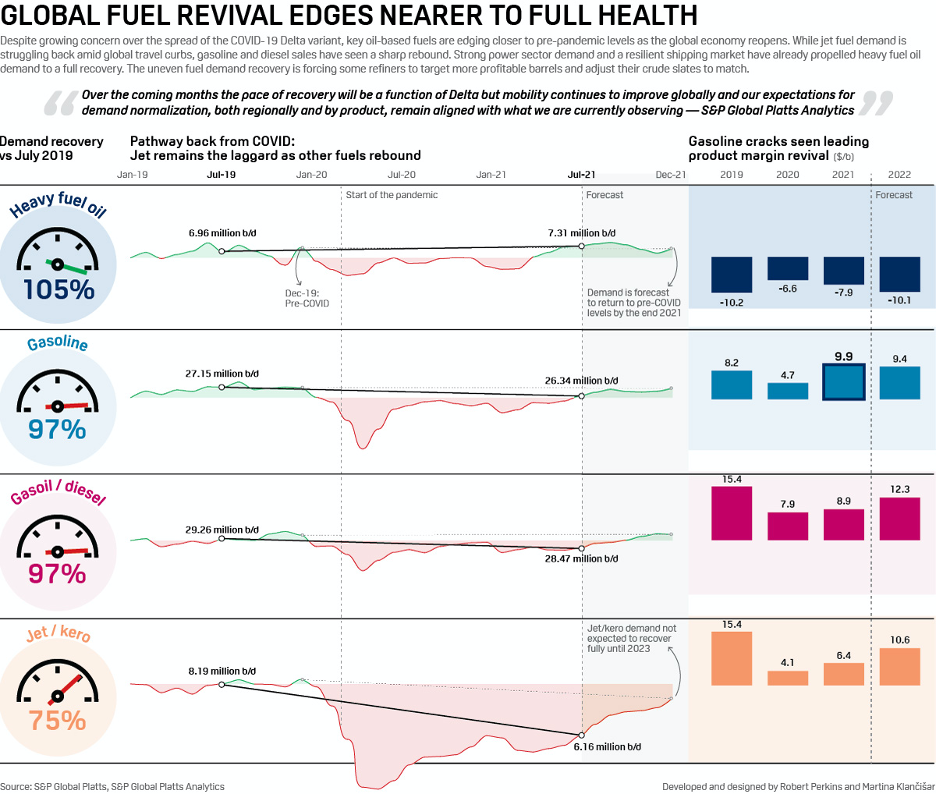 Despite growing concern over the spread of the COVID-19 Delta variant, key oil-based fuels are edging closer to pre-pandemic levels as the global economy reopens.

China's grain demand has been a focal point for agriculture markets since 2020 and suppliers continue to look for clarity, especially on corn for which global supplies are expected to tighten further and in light of recent announcements by Beijing all of which point towards jitters around food security.