Recent actions by three of the world’s crucial players in the battle against climate change—China on carbon markets, Europe on climate policy, and the U.S. on rule rollbacks—signal the direction climate decision-making may move toward in the near-term.

In 2019, these countries accounted for a majority of global emissions, with China producing 27% of greenhouse gases, the U.S. releasing 11%, and the eurozone emitting 6.4%, according to the Rhodium Group. This year, these nations affirmed aggressive net-zero targets and committed to climate policies.

In late April, Chinese President Xi Jinping restated his pledge to reverse China’s carbon emissions before 2030 and achieve carbon neutrality by 2060. The Chinese government promised to "strictly control coal-fired power generation projects" and "strictly limit the increase in coal consumption" as part of its Five Year Plan through 2025, after which China said it will phase coal out of its energy mix to make way for renewables. The U.S. committed to reducing the country’s greenhouse gas emissions by 50%-52% from 2005 levels by 2030. The Biden Administration brought forth the most sweeping and determined legislative plans introduced in an effort to transition the U.S. economy under the clean energy-oriented provisions proposed within its infrastructure package. Yesterday, the E.U. announced sweeping policy proposals that made the bloc the first major economy to detail a roadmap for how it will achieve net-zero emissions.

China expects this month to launch its long-awaited carbon emissions trading system, initially including its power sector, and ultimately by 2025 to include the country’s steel, building materials, petrochemicals, chemicals, nonferrous metals, paper, and aviation industries. A June introduction of the system was postponed due to the country’s caution over how an unregulated carbon market could socioeconomically effect different provinces. Experts who helped to design the system have said that China's carbon market is likely to resemble a marathon with long-term climate goals instead of a 100-meter dash focused on immediate and heavy-handed directives to cut emissions, according to S&P Global Platts. Chinese officials said this week that the carbon trading system will be reinforced with regulation targeting data falsification and allowing for close government supervision of trading.

China’s "net-zero pledge is not about applying a constraint that lowers economic growths but revolutionizing the way of economic growth," Liu Qiao, dean of the Guanghua School of Management at Peking University, said at a June 29 “Net Zero: A New Engine Driving China's Socio-Economic Development” forum in Beijing, according to S&P Global Platts. He said that China needs its carbon market to help in reasonably allocating carbon emissions and capital flows in a stable manner.

U.S. President Joe Biden in late June repealed a Trump-era methane rule rollback on the oil and gas sector following the law’s passage in both chambers of Congress with some bipartisan support. The rule in its previous form had allowed the oil and gas industry’s upstream and midstream segments to bypass methane-monitoring requirements. The Biden Administration has also explored rescinding another Trump-era rule that controlled how the National Environmental Policy Act can be used to review new infrastructure like natural gas pipelines, but as of late June had appeared to delay changes. The White House has also detailed plans to set a clean power standard and green its mining industry to support the energy transition. But achieving net zero status in the U.S. may prove slow and difficult without Congressional support for policy change alongside corporate engagement.

Such regulations may not be "vastly different" than parameters set during the Obama era, which many companies have already met, Pavel Molchanov, an energy analyst at the investment bank Raymond James, told S&P Global Market Intelligence. "Government policy is one thing to consider, but even when there was no regulation or mild regulation, pressure from shareholders can be much more powerful for publicly traded companies.”

Announcing that the fossil fuel economy “has reached its  limits,” European Commission President Ursula von der Leyen yesterday introduced a vast array of policy proposals to cut the region’s emissions by 55% no later than 2030. The EU aims to have its final energy demand in 2030 include at least a 40% share of renewables, set tough carbon emissions targets for cars that will eventually prohibit sales of new diesel and gasoline vehicles by 2035, and implement strict carbon taxes on steel and aluminum imports by 2026, among other measures. The package will need to be passed by the European Parliament and the EU Council, which may take up to two years. Europe remains the world’s leading market for green and sustainability-linked bonds.

The proposal is a "great start" to achieving the E.U.'s ambitious goals, but it is still "far from a done deal” as "final decisions are well down the road and full implementation will be several years away," Roman Kramarchuk, head of future energy analytics at S&P Global Platts Analytics, told S&P Global Platts. "Previous efforts from the EU—notably in aviation—have been tempered by the reality of seeking consensus, and there are plenty of reasons to believe we'll see this package moderated over time as well.”

Today is Thursday, July 15, 2021, and here is today’s essential intelligence. 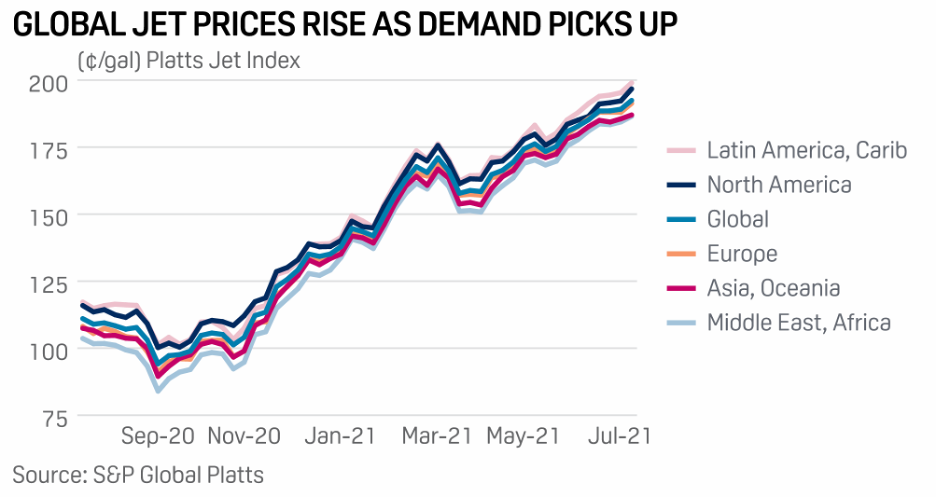 Register Now Delta's CEO Ed Bastian said on the company's July 14 second quarter results call that Atlanta-based Delta officially reopened its office in June . He added that Delta's most recent survey of its corporate client base showed that almost 95% of them indicated they will be returning to the office by the end of 2021. Mark Haefele, Chief Investment Officer at UBS and Alexandra Dimitrijevic, Global Head of Research at S&P Global Ratings joined Joe Cass on this edition of Fixed Income in 15. Discussion focused on the evolution of ESG over the past 18 months, long term credit outlook and views on the digitalization of finance including blockchain and cryptocurrency. There was also time to talk about Mark’s prior career as a lecturer at Harvard and Alexandra’s experience co-leading the S&P Global Diversity Research Lab.

Credit Trends: Recovery In Oil and Gas Brings the U.S. Distress Ratio Down to 2.3%

S&P Global Ratings currently rates $62.0 billion of highway user tax bonds, secured by transportation-related taxes and fees, such as fuel taxes and motor vehicle registration fees. Most of these are highly rated, with only three ratings below the 'AA' category, reflecting typically high debt service coverage and stable pledged revenues.

Covered Bond Harmonization In the EU Remains A Work in Progress

It's been years in the works, but the EU's covered bond directive is now becoming law in countries within the region. Once accomplished, S&P Global Ratings believes it will represent an important first step in creating a more level playing field for covered bonds in Europe. What's more, it will help cover liquidity risk and enhance the comparability of covered bonds across jurisdictions. 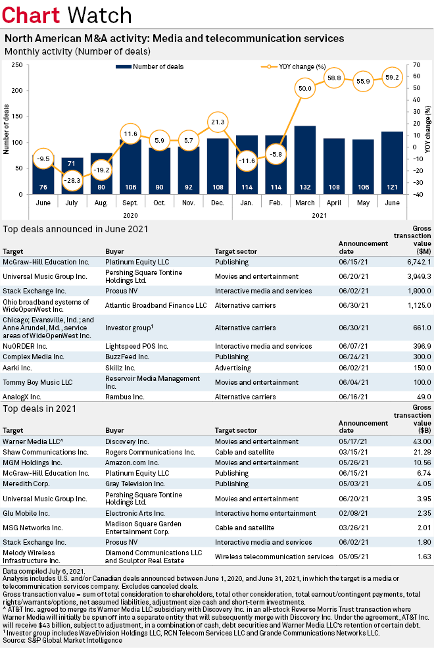 June continued the 2021 recovery in media and telecom M&A, with a headline-making SPAC deal accounting for one of the largest transactions announced during the month. Sector deal announcements totaled 121 transactions in June, up from just 76 deals in the prior-year period. That was not only an improvement over 2020's pandemic era total but also over June 2019.

Deutsche Bank AG's operations in the Americas, particularly in the U.S., are expected to continue on an upward trajectory in the year ahead, even as markets normalize and political and regulatory scrutiny persists, analysts said.

The shifting political winds in Latin America will be monitored closely by Spain's Banco Santander SA and Banco Bilbao Vizcaya Argentaria SA, which have come to rely on the region to offset weak profitability in their European businesses.

Japanese Megabanks May Get Boost from Proposed Data-Sharing Rule Changes

Lenders such as Mitsubishi UFJ Financial Group Inc., Mizuho Financial Group Inc. and Sumitomo Mitsui Financial Group Inc. will be able to share customer information between banks and securities units, provided clients agree, under proposals being considered by the Financial Services Agency, or FSA. The ending of a nearly 30-year ban would help the megabanks offer a wider range of services to customers, such as deal advisory, equity and debt issuance, and potentially bolster efforts to poach clients from stand-alone brokerages.

Electric vehicle demand is expected to skyrocket worldwide and that could require a lot more minerals than currently being supplied today for the necessary batteries. This episode features interviews with Nikit Abyankar, a scientist at the Lawrence Berkeley National Laboratory and David Wooley the executive director of the Center for Environmental Public Policy at the University of California, Berkeley. The Energy Evolution team also spoke with S&P Global Market Intelligence metals analysts Jason Sappor and Alice Yu, and Payal Sampat, the mining program director at Earthworks.

A growing number of Asian refiners are keen to regularly buy European and Australian crude oil regardless of the arbitrage economics, as the end-users aim to fill a certain portion of their monthly feedstock baskets with crude and condensate certified as carbon neutral.

Environmental, social, and governance (ESG) issues continue to gain the attention of consumers, investors, and other stakeholders who are putting pressure on businesses throughout the economy to take steps to move to a low-carbon environment. As a result, gathering appropriate metrics and reporting on ESG strategies are fast becoming business imperatives. This is especially important for banks that need to consider ESG issues in their investing and lending portfolios. 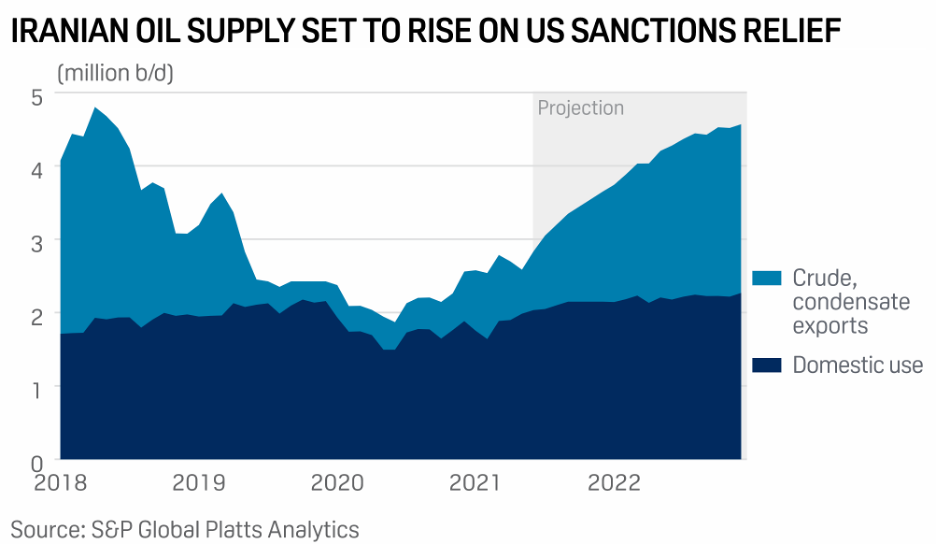 A deal to remove US sanctions on Iran's oil and other energy exports still remains the consensus view among analysts, but the possibility of talks collapsing has started to grow with the delays.

OPEC kingpin Saudi Arabia was deep in talks with the UAE on July 14 to resolve a dispute over the latter's output target, with the bloc's plans to raise crude production over coming months with Russia and several allies hinging on the outcome.

Spotlight: Capital Discipline Is Slowing Growth In U.S. Oil Production. But How Long Will It Last?

The current growth trajectory of US oil production is not in line with sustained higher oil prices, now trading at $75/b WTI. Capital discipline from public companies is reducing oil growth, while small/private companies are the ones driving most of the drilling activity.