The near future is brightening for Latin American economies, but obstacles may await on the long-term path forward.

After contracting 6.9% last year, the six major economies in the region—Argentina, Brazil, Chile, Colombia, Mexico, and Peru—are likely to grow by 5.9% this year due to the service sector’s stronger-than-expected performance, according to S&P Global Ratings. During the coronavirus crisis, local governments across Latin America have faced financial strain despite sovereign aid and companies have endured mounting credit risk and high probabilities of default.

The recent resiliency may wane. S&P Global Ratings projects growth will slow to 2.5% next year as unpredictable policy actions and higher social instability could become greater risks to investment and productivity across the region.

“Latin American economies will face three unfavorable dynamics next year: monetary tightening, fiscal tightening, and less predictable policy,” S&P Global Ratings said in its third quarter Latin America economic outlook. “Middle- and lower-income households have been hardest-hit by the pandemic, with important implications for policy, which at this point are highly uncertain. Lower levels of policy predictability could delay investment plans among some companies, at least until there is greater policy visibility.”

Instability may weigh on investor sentiment. Both headline and core inflation have exceeded central bank targets. Additionally, policy predictability has diminished as ongoing unrest in the region intensifies—as seen in Colombia’s ongoing turbulence over a proposed tax bill, the rise of anti-establishment political leaders in Peru and other Latin American countries, and uncertainty surrounding the drafting of Chile's new constitution.

Political disruption is already having near-term effects on sectors important to Latin America’s output, most evident in mining industries across the region. In Peru and Chile, economically valuable mineral exploration and mine development spending could move elsewhere due to the rise of left-wing nationalist politics and the potential for higher taxes in these two countries, industry experts told S&P Global Market Intelligence. Such disruption may threaten the viability of the region to provide the world with the critical minerals needed to spearhead the energy transition.

Latin America’s political turmoil is particularly concerning for miners, Brian Menell, CEO of mining investor TechMet, told S&P Global Market Intelligence. "You have a serious risk in Chile and in certain other countries like Peru ... of a kind of populist-socialist backlash against the growing disparities and inequalities and aftermath of the present pandemic … It's not impossible you get nationalization of massive lithium resources."

While an increase in minerals demand could fuel a long-term economic boom across Latin America, any decrease could have dramatic detrimental implications. Chilean, Peruvian, and Mexican mines provided nearly 40% of the world’s estimated copper production this year, according to S&P Global Market Intelligence. Likewise, Chile and Argentina hold more than 25% of the world's estimated lithium production, and Peru, Mexico, and Bolivia account for an estimated 19% of zinc production.

"It is a predictable cycle … Commodity prices increase. Governments see companies making windfall gains. Taxes increase and/or nationalism [and then] investment cools," Bruce McLeod, president and CEO of Sabina Gold & Silver Corp., a Canada-based gold exploration and mine development company, told S&P Global Market Intelligence. "So the benefits of operating in some of those countries have been eroded … Taxes and expropriation risk will hurt investment in some of these jurisdictions.

Today is Tuesday, July 13, 2021, and here is today’s essential intelligence. 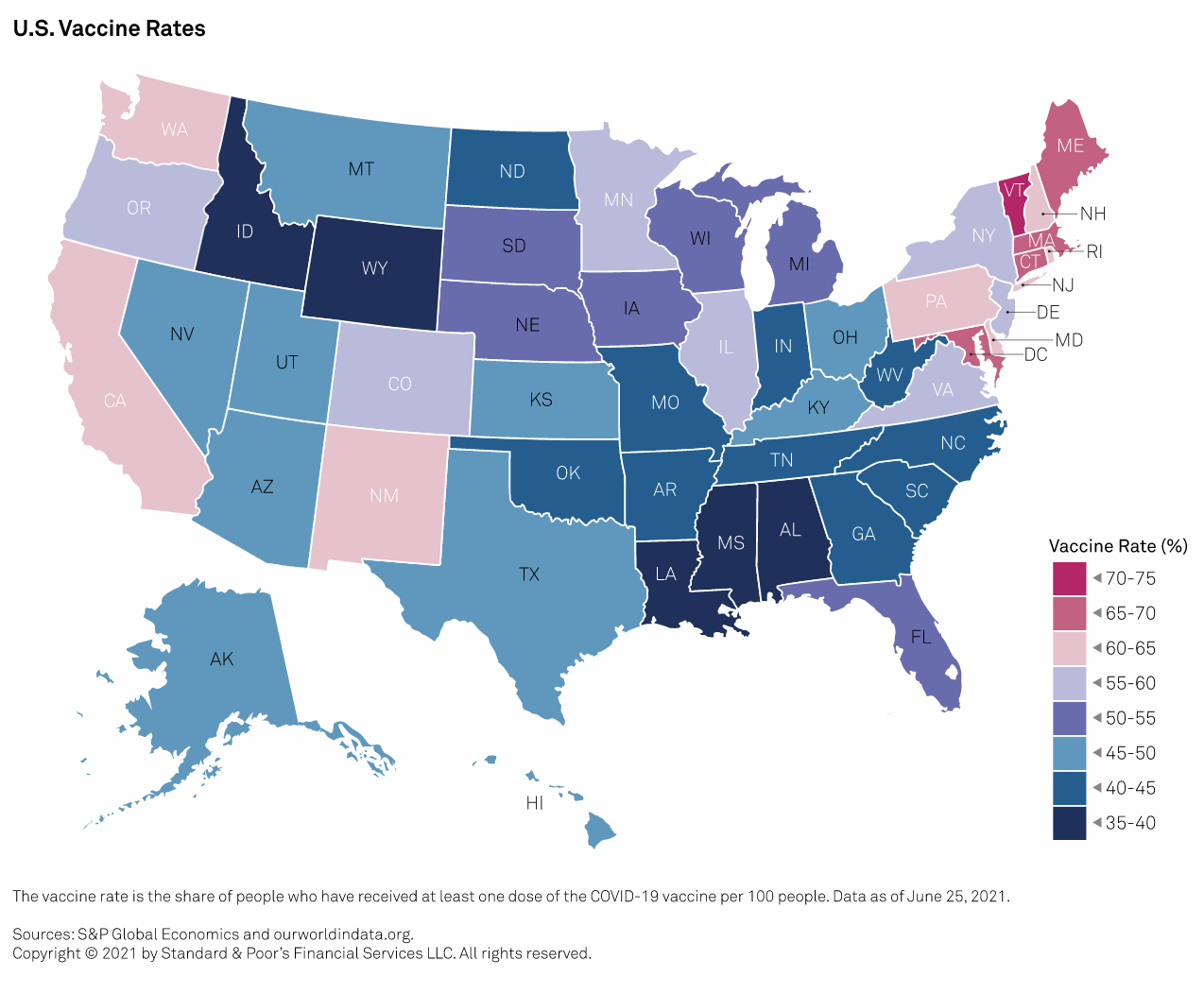 The U.S. economy continued to strengthen as mobility trended upward in the second quarter, despite slowing vaccination rates and the rise of the delta variant. Meanwhile, the growth in housing-related activity has eased and the reopening has brought about consumer spending shifts to services from durable goods. The labor market remains on the mend as services get back to full capacity, with real-time data indicating solid U.S. job gains this July.

From the opening of canals, to the development of an intercontinental railroad system, to the interstate highway program, infrastructure has helped the United States (US) become the global economic engine it is today. However, infrastructure has been aging over the past several decades as capital needs are being deferred and the lack of investment is challenging the ability of the US to sustain its economic prosperity.

Credit Trends: Downgrade Potential Continues to Decline Across All Sectors 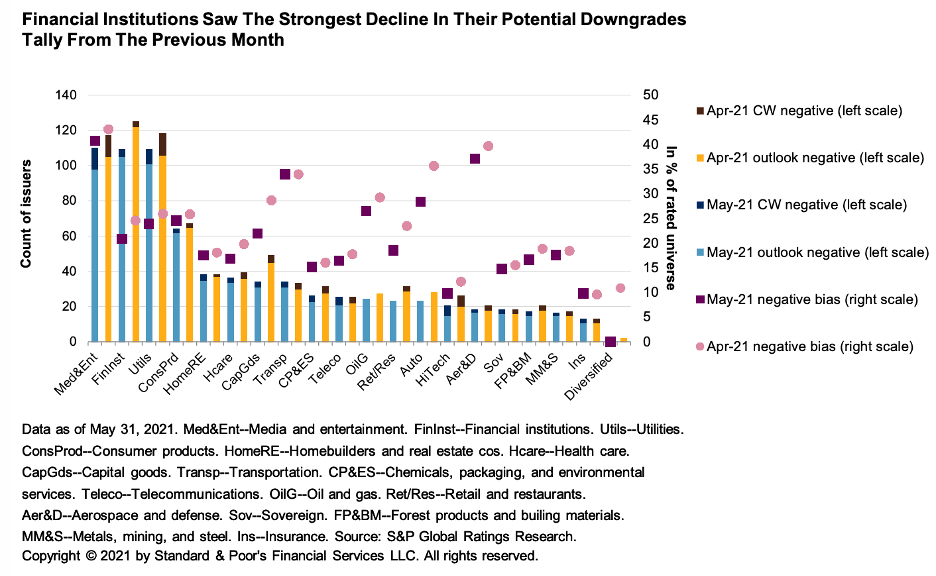 The 2021 corporate default tally increased to 48 after one U.S. default this week. The defaulter is Virginia-based internet protocol network operator GTT Communications Inc. With this default, the year-to-date 2021 U.S. tally rose to 27—its lowest year-to-date level in the past four years. At this point in 2020, 2019, and 2018, defaults totaled 87, 45, and 32 in the region, respectively.

How Will European RMBS Respond When COVID-19 Relief Measures Come to an End?

European governments are withdrawing the measures they instituted at the start of the pandemic to support housing market demand and mortgage borrowers. S&P Global Ratings has considered the effect on arrears, and thus on S&P Global Ratings’ universe of rated RMBS transactions.

Why ETFs Held Up to 2020's Pressure Test

Dividends are an important part of the investment toolkit, contributing 36% to the total return of the S&P 500® since 1936.1 This sizable contribution has been particularly welcome during the multi-year low interest rate environment and, more recently, as the world has faced economic dislocations induced by COVID-19. In addition to dividend income, investors have been clamoring for higher-quality companies, with sustainable earnings and a less-volatile return profile.

S&P Global Market Intelligence’s annual analysis of major gold discoveries has identified 329 deposits discovered over the 1990-2020 period, containing 2.58 billion ounces of gold in reserves, resources and past production. With the London Bullion Market Association gold price increasing from an average of $1,482 per ounce in December 2019 to an average of $1,860/oz in December 2020, it is unsurprising that the number of older, small discoveries has increased significantly due to gold price revisions.

The double-whammy of both global oil and gas prices surging is threatening to dim the chances of a sustained energy demand recovery that India is expecting after a long period of slow growth, clouding the outlook for spot LNG and crude oil purchases. 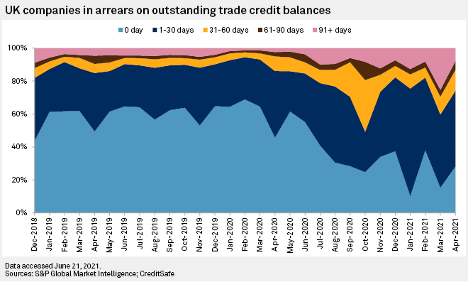 European companies' ability to repay their COVID-19 loans is at risk as they face delayed payments on invoices, according to market participants. Companies across Europe saw a sharp increase in the number of suppliers delaying payments over the course of the pandemic, according to trade credit balance data from S&P Global Market Intelligence and CreditSafe. As of April, these delayed payments were still far more commonplace than they were before the COVID-19 crisis. 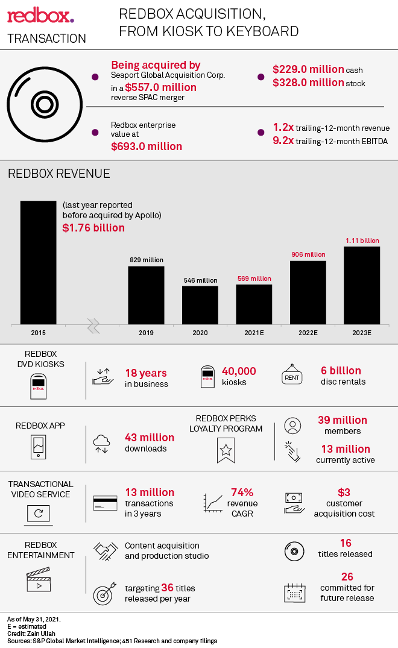 Redbox Automated Retail LLC, which is in the process of going public via a reverse merger with special purpose acquisition company Seaport Global Acquisition Corp., is aiming to evolve its business beyond its legacy DVD rental kiosks to include more revenue from streaming partnerships, ad-supported content and other business. The company, which specializes in distributing low-budget films, is attempting to coax the company's 39 million value-conscious loyalty program customers, many of whom are technology late adopters, to give digital media a try. S&P Global Market Intelligence recently spoke with Redbox CEO Galen Smith about the future of Redbox and video entertainment in general.

Vacuuming Carbon From the Sky no Joke for Rapidly Warming World 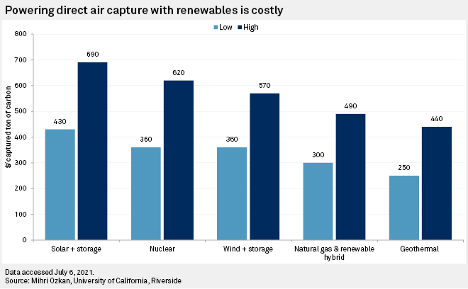 The prospect of sucking carbon dioxide out of the atmosphere is gaining traction as policymakers and fossil-heavy companies ponder new ways to tackle climate change without upending the world economy. What may have sounded like science fiction a few years ago — deploying giant machines that draw in air and use chemicals to separate carbon dioxide from ambient air — is now getting closer to reality.

A nationwide clean power standard requiring 80% of U.S. electricity to come from carbon dioxide-free sources by 2030 would save hundreds of thousands of lives and sharply improve air quality while combatting climate change, according to a new study released July 12.

The UAE's $1 billion green ammonia project in Khalifa Industrial Zone Abu Dhabi will start production in the second quarter of 2024 and target exports mainly to Europe and the US, a KIZAD official told S&P Global Platts, as OPEC's third largest oil producer invests in a clean energy pivot. 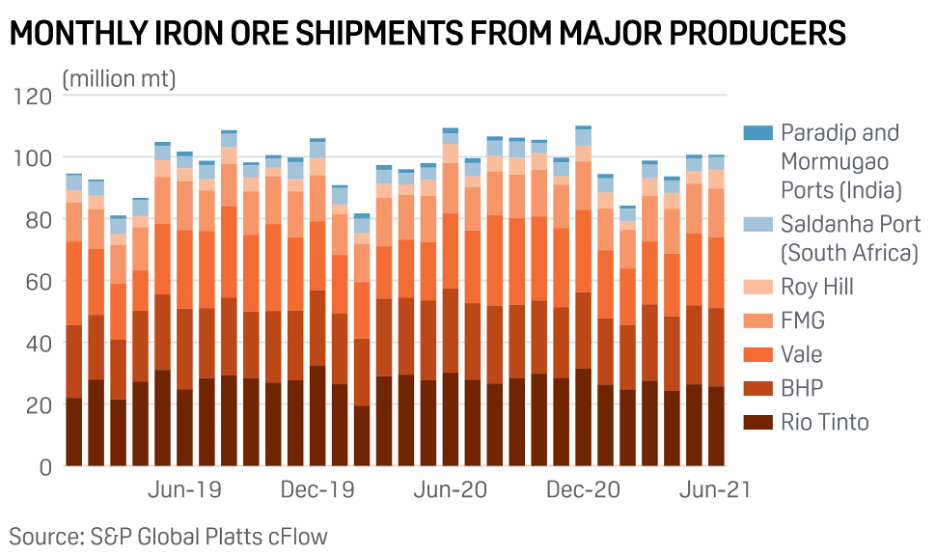 Iron ore exports from major producers in the first half of 2021 were largely flat on the same period a year ago. Operational issues at Rio Tinto and Vale mean the miners will need to lift export run rates to meet full-year targets, while BHP achieved its financial year target and Fortescue Metals Group's export performance was weaker than expected.

A growing number of orphaned and abandoned wells in the U.S. is growing costlier by the day, challenging an oil and gas industry that is already negotiating the energy transition away from fossil fuels, according to critics, who are calling for reforms and new funding to clean up long-dormant, corroding sites.

Alumina prices are expected to lag aluminum in coming months, after significantly falling behind a surge aluminum prices in the second quarter, as more production capacity comes online.