Two months ago, President Donald Trump issued an executive order forbidding U.S. securities investment in at least 30 Chinese companies, alleging that the companies finance the People’s Republic of China military. This week, the ban was updated with new guidance prohibiting the owning of such companies’ stocks, and expanding the blacklist to include companies’ subsidiaries as well as the addition of nine firms.

A lack of clarity in the updated guidance over how U.S. companies should address investments sparked a sell-off of Chinese assets across Wall Street. In turn, buyers from around the world scooped up the discarded shares. The state-controlled China National Offshore Oil Corporation, or CNOOC, was blacklisted in November and added this week to the U.S. Commerce Department’s entity list of firms that U.S. groups can’t trade with—yet the oil producer’s shares climbed at least 16% over the week. S&P Dow Jones Indices said in a Jan. 13 statement that due to the sanctions it will remove the oil giant CNOOC’s shares from its indexes on or before Feb. 1. BlackRock shrunk its stake in the telecommunications company China Mobile in recent weeks and MSCI Inc. removed the Chinese company from its listings on Jan. 8. But China Mobile’s stock is likely to close this week at its highest level in over a decade due to a surge in Asian and European investment.

The New York Stock Exchange’s move to delist the Chinese telecommunications companies China Mobile, China Telecom Corp., and China Unicom earlier this month demonstrated the risk from the escalating tension for Chinese companies, Ken Wong, an analyst from the Hong Kong-based financial services firm Founder Securities, told S&P Global Market Intelligence. The NYSE changed course on Jan. 4, saying in a statement that “in light of further consultation with relevant regulatory authorities” the companies it previously defined as “no longer suitable for listing” were to remain included, but reverted to its original delisting plan shortly thereafter.

The Trump administration’s "latest move seems to be part of a strategy to cut off the supply of capital to China's leading companies,” Wong Kok Hoi, the founder and CIO of the China-focused firm APS Asset Management, told S&P Market Global Intelligence, signaling that the action would continue after Jan. 20. “[The] Biden administration [is] unlikely to immediately reverse Trump's decision because Biden can't be seen by Americans as not tough on China.”

Under the Biden administration and throughout the year, tensions between the U.S. and China are likely to intensify.

“The strained relationship between the world’s two biggest economies, particularly regarding China’s access to American technology and financial markets, could place additional pressure on economic and business conditions in both countries, and beyond,” S&P Global Ratings said in a recent 2021 outlook. “U.S. policies and initiatives that target China and activities of Chinese companies could create business disruptions for either country’s companies operating or exporting to the other country.”

Because access to financial markets is crucial, “any major restrictions could have extensive implications for the operations of global financial institutions and entities that rely on trade and U.S. dollar funding. Although workarounds may be feasible, the effect could be amplified by economic size and interconnectedness. China is likely to respond with active industry policy and financial support,” S&P Global Ratings said.

President Trump has placed pressure on American companies like Apple to reduce their reliance on Chinese supply chains, and has attempted to take action against Chinese companies like Byte Dance Telecommunications, which is the parent company of the popular app TikTok. China has increased its scrutiny of technology, internet, and e-commerce companies in its own country, focusing antitrust regulation on Alibaba.

Today is Friday, January 15, 2021, and here is today’s essential intelligence.

Weekly US Jobless Claims Surge To 965,000, Highest Since August 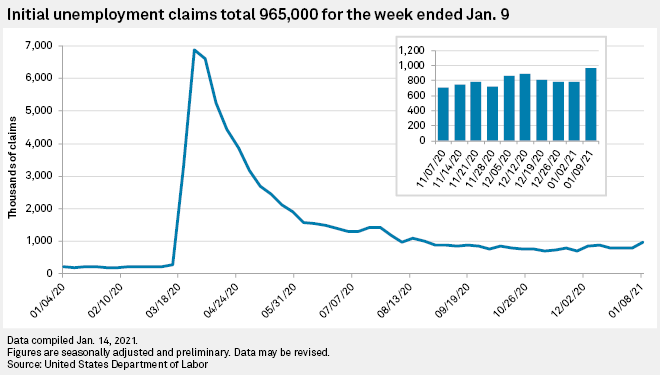 U.S. initial unemployment claims surged to nearly 1 million in the first week of 2021, hitting the highest weekly total since August 2020 as the recent wave of COVID-19 infections and business restrictions weighed on the labor market.

The last-minute decision by the outgoing Trump administration to hold off on retaliating against France for its digital services tax is good news for U.S. importers and consumers but could also mean that the incoming Biden administration will have to act not only on this outstanding tax but also on others across the globe. 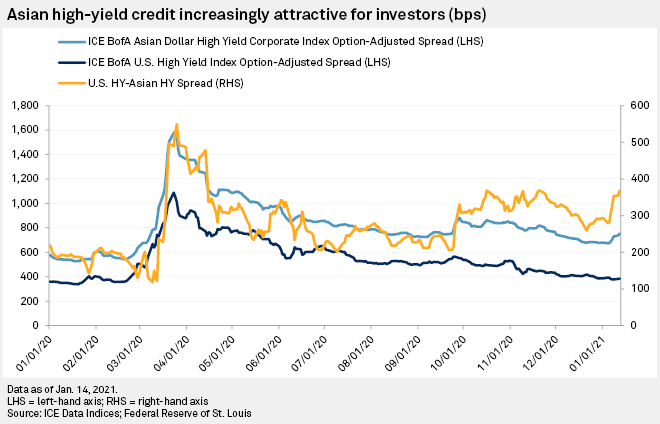 Ultra-loose monetary policy has pushed yields in the U.S., Europe and Japan below levels seen before the coronavirus pandemic, and there may be little juice left in the lemon, even in the sub-investment grade space. However, high-yield investors willing to take a risk on Asia can earn an average of 368 basis points more than they can on equivalent dollar debt in the U.S., close to the most since April, and about 150 bps more than pre-COVID-19.

The Federal Reserve will be "very careful" in communicating any future plans to gradually reduce its massive bond-buying program, mindful that markets have a "real sensitivity" to the issue, Fed Chairman Jerome Powell said Jan. 14.

Outlook For U.S. Not-For-Profit Transportation Infrastructure: Light At Tunnel’s End – But How Long Is The Tunnel?

S&P Global Ratings' 2021 view of business conditions and credit quality across U.S. public transportation infrastructure is negative for the airport, mass transit, parking, and toll road sectors and stable for the ports and federal grant-secured sectors.

Gas Utility Stocks Pull Back After Nearly 11% Surge In Q4'20 Gas utility stocks are paring their fourth-quarter gains as the outlook for the sector's equity prices remains uncertain following a bruising 2020.

Performance Of Indian Capital Markets In 2020 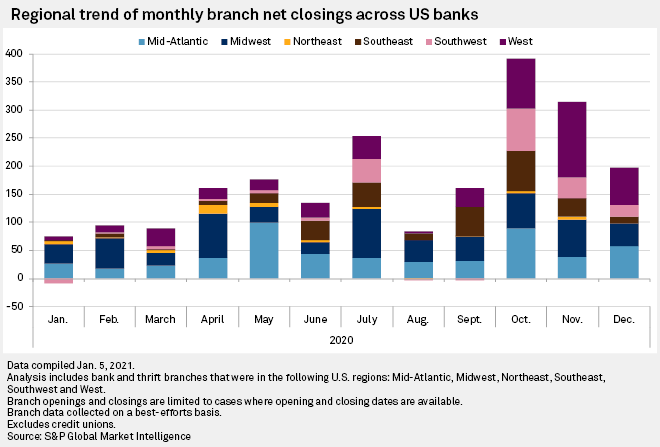 US Banks Use Excess Liquidity To Shrink CDs, Borrowings

Banks have taken advantage of the excess liquidity on their balance sheets to decrease their reliance on higher-cost deposits and borrowings, a trend likely to continue as deposits remain plentiful.

U.S. Bank Outlook 2021: Picking Up The Pieces And Moving On

In And Out: Computing The Impact Of Apple's Chip Insourcing, Intel’s Outsourcing 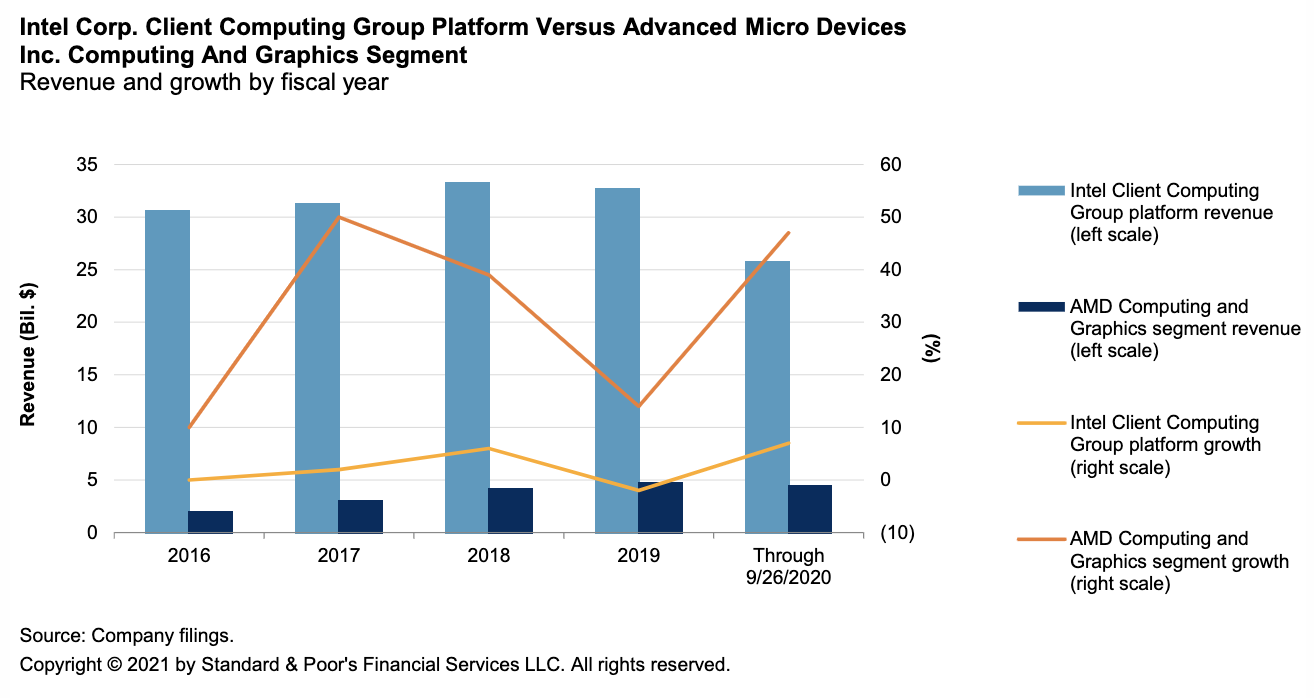 Apple Inc. recently announced it will design its own advanced reduced instruction set computer machine (ARM)-based processors for its Mac products, instead of relying on Intel Corp.-based x86 processors. This should not come as a surprise as Apple has long deployed its tightly integrated iOS software and in-house developed ARM processors to drive greater performance, faster development cycles, and an enhanced user experience in its iPhones and iPads.

Fixing Intel Corp. will take time, but replacing a financial-specialist CEO with an experienced engineer chief executive is a good start, analysts said.

HBO Max May Struggle To Charge A Premium Throughout Europe – Experts

The 117th Congress is unlikely to advance more progressive climate measures, such as a carbon tax, despite opportunities presented through reconciliation, sources said. But a reconciliation bill could contain tax credits and other incentives for electric vehicles and renewable energy technologies, funding streams to help modernize the grid and policies aimed at improving energy efficiency.

New Fortress Energy Inc.'s move to acquire Golar LNG Partners LP and Hygo Energy Transition Ltd. represented a bet by the private company on increasing natural gas demand in Brazil and a play for what analysts see as a growing market for investments in infrastructure to supply developing economies with lower-carbon fuels.

In the not-too distant future, it could become common practice to head out to the local waste processing facility to fill up your vehicle – and the fuel will be hydrogen rather than gasoline or diesel, according to Ways2H CEO and co-founder Jean Louis Kindler.

Analysis: Asia's 'H2 at $2' green hydrogen target is a mission not impossible

Some of Asia's biggest potential hydrogen consumers are hopeful that Australia will be able to achieve its aim of sharply reducing production costs to supply green hydrogen at $2/kg in the future, but analysts say the multiple hurdles in its path may take many years to overcome.

China's vehicle sales are forecast to exceed 26 million units in 2021, up 4% from a year earlier, as vehicle consumption picks up in tandem with the country's economic recovery, with electric vehicle, or EV sales tipped to rise by 40% from a year earlier, the China Association of Automobile Manufacturers, or CAAM, said on Jan. 13.

The total US oil and gas rig count leaped by 18 to 424 in the week ending Jan. 13, rig data provider Enverus said, with the Permian seeing its largest weekly gain since the pandemic began to affect markets last March.

Global oil stockpiles fell to a seven-month low in November but OPEC, which kept its 2021 demand outlook little changed from last month's forecast, has signaled it is still trying to shrink them further.

US-based LNG project developer Tellurian's proposed Driftwood export facility in Louisiana would have a capacity of up to 27.6 million mt/year. Charif Souki, co-founder and executive chairman of the company, spoke to Harry Weber in late December 2020 about current market dynamics and future prospects for LNG trade.