Continuing a cascade of unprecedented events, the Democrat-led U.S. House of Representatives, with support from 10 Republicans, impeached President Donald Trump in a 232 to 197 vote.

Charged with “inciting violence against the government of the United States,” President Trump is the first leader in U.S. history to be the subject of this action more than once and only the third president ever to be charged with high crimes and misdemeanors by Congress.

The impeachment, which began on Monday when the House introduced the article and finished yesterday with the passing of the vote, were also unprecedented: Never before have such proceedings moved so quickly. The chamber was protected by thousands of National Guard troops, in the wake of the deadly storming of the Capitol by Trump supporters a week earlier.

"The president of the United States incited this insurrection, this armed rebellion, against our common country," House Speaker Nancy Pelosi, a Californian Democrat, said in an address to the House on Jan. 13. "He must go. He is a clear and present danger to the nation that we all love."

President Trump’s future awaits him in the Senate. A two-thirds majority will be required from the upper chamber to convict him. Current Majority Leader Mitch McConnell has signaled that he believes the president’s actions to be an impeachable offense but hasn’t committed to how he’ll vote. Mr. McConnell said he wishes for the trial to follow President-elect Joe Biden’s inauguration on Jan. 20, when Democrats will control the chamber. The proceedings can occur after President Trump has left office, but doing so may cast a shadow over the early days of the Biden Administration, during which the next cabinet members will be seeking confirmation from Congress.

“Given the rules, procedures, and Senate precedents that govern presidential impeachment trials, there is simply no chance that a fair or serious trial could conclude before President-elect Biden is sworn in next week,” Mr. McConnell said in a Jan. 13 statement. “In light of this reality, I believe it will best serve our nation if Congress and the executive branch spend the next seven days completely focused on facilitating a safe inauguration and an orderly transfer of power to the incoming Biden administration.”

The push for the second impeachment against President Trump exemplifies the broad anger expressed at his refusal to accept the outcome of the November presidential election. After months of spreading misinformation about the validity of the results, President Trump urged supporters to march on the Capitol on Jan. 6., which resulted in five deaths, numerous injuries, and significant damage to the “People’s House.” The day on which Congress certified the presidential election results became only the second time the Capitol had been under siege since 1814.

On Jan. 12, the day before the impeachment vote, the president, while speaking in Texas, described his actions to motivate his supporters to challenge the election result as “totally appropriate.” It wasn’t until after the impeachment vote that he, in a videotaped speech, denounced the attack and said that “violence and vandalism have absolutely no place in our country” without referencing his earlier comments. He did not concede defeat in the election.

Large companies including J.P. Morgan, Morgan Stanley, Charles Schwab, Airbnb, Marriott International, and Dow that have largely benefited under the Trump Administration have vowed to suspend or stop entirely their donations through political action committees to the 147 Republican lawmakers that objected to certifying the presidential election results. These reactions were prompted by companies’ heightened engagement with environmental, social, and governance risks and opportunities. While the business community had "no choice but to speak out" in response to the suggestion that America's electoral process was rigged due to “the creation of political instability, which is anathema to business and to business investment and to job creation," as Partnership for New York City President and CEO Kathryn Wylde, who oversees the organization of top CEOs based in and around the metropolis, told S&P Global Market Intelligence, the shift to pulling political support is striking.

"Companies have been behaving like they could pick and choose what part of the system they are interacting with, and they can't," Jonas Kron, chief advocacy officer at the sustainable investment firm Trillium Asset Management, told S&P Global Market Intelligence. "You can't spend four years saying, 'Oh, I really appreciate the tax cuts and the deregulation, but I'm going to check out on the racism, sexism and xenophobia.'"

Today is Thursday, January 1, 2021, and here is today’s essential intelligence.

The Essential Podcast, Episode 26: In Hindsight — Podcasting Through the Pandemic 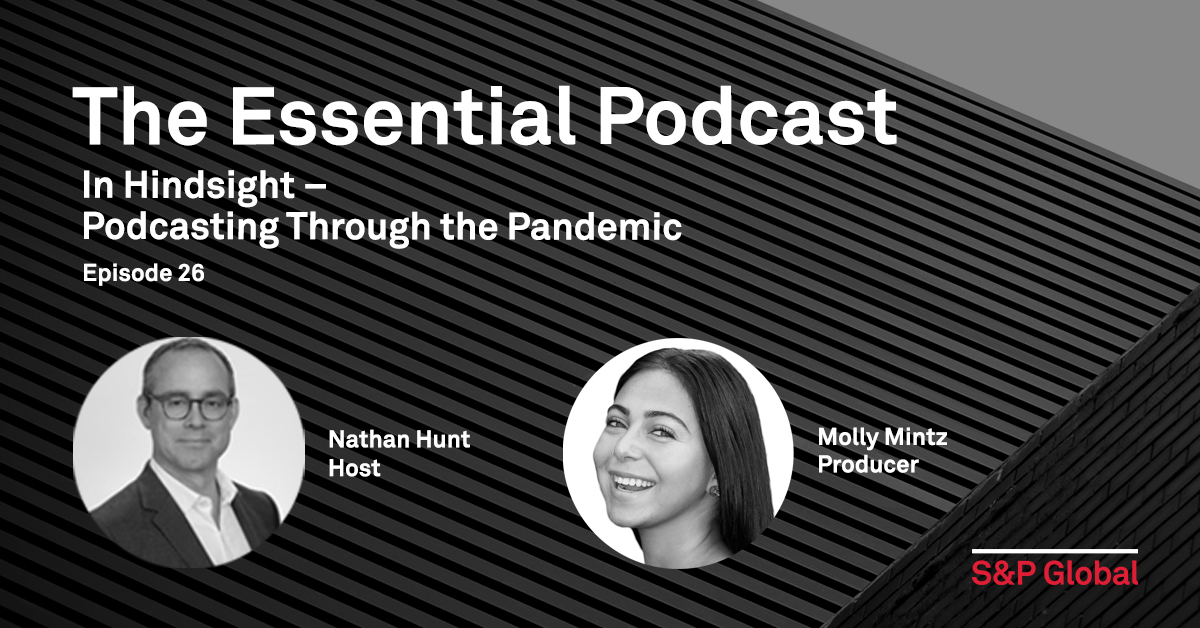 Host Nathan Hunt is joined by Essential Podcast producer Molly Mintz to review the events—and episodes—of 2020. Not only discussing their lessons learned and favorite guests of the year, the duo share their thoughts on what topics they’re eager to tackle next.

—Listen and subscribe to The Essential Podcast from S&P Global

The large 140,000 drop in the Bureau of Labor Statistics (BLS) December nonfarm payrolls, driven disproportionately by the pandemic-sensitive leisure and hospitality sector, was far worse than S&P Global Ratings’ expectation of a modest 50,000 job gains for the month. 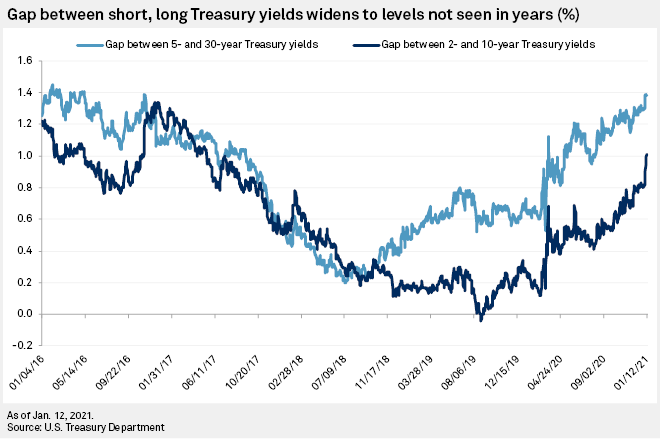 The short-term outlook for the U.S. economy may be dark, but bond investors see a bright future. The U.S. Treasury yield curve has steepened to levels not seen since 2016, signaling that investors expect economic expansion and higher inflation in the coming years as coronavirus vaccines are distributed and incoming President Joe Biden and a Democrat-controlled Congress are expected to pass another substantial stimulus package. 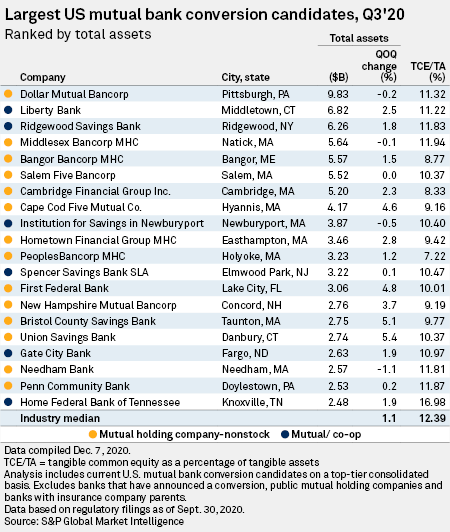 In early November 2020, a hedge fund manager took to the streets of suburban New Jersey in his campaign to win a board seat at Elmwood Park-based Spencer Savings Bank SLA. Armed with a placard and pamphlets, the multimillionaire unsuccessfully stumped for signatures.

Analysts are positive on the potential for bank stocks in 2021, with the staff at Goldman Sachs Equity Research, BofA Global Research and Piper Sandler & Co. expecting economic recovery in the U.S. to drive strong returns for banks.

Investor aversion and strained government finances could complicate the capital plans for some Indian banks, particularly state-owned ones, after the central bank's latest stress tests indicate that some lenders' capital could fall below minimum regulatory requirements this year in the aftermath of the coronavirus pandemic. 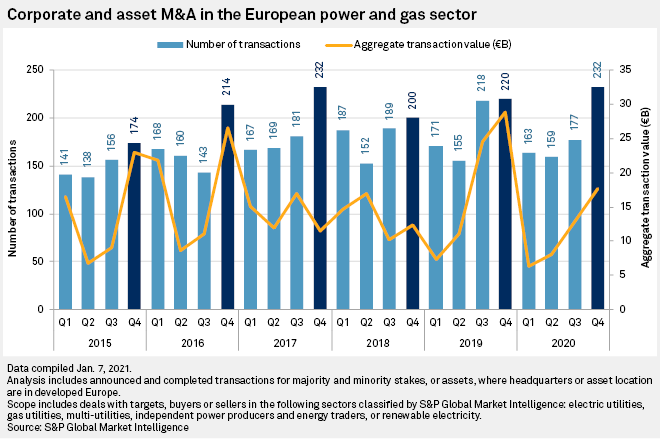 CES 2021: Experts Weigh In On The Importance Of Diversity In Building AI

The Trump administration barred all cotton and tomato products from China's Xinjiang region over allegations of human rights abuses against ethnic minorities, spelling potentially large supply chain consequences for U.S. companies that source from the region.

The head of a top US oil and gas trade group said he was open to working with the Biden administration on new regulations on methane emissions, even as he renewed criticism of "command and control" type rules and promised opposition to limits on drilling on federal lands and waters.

Texas is well-suited to become the leading producer of low-cost hydrogen in the US due to its existing hydrogen infrastructure and proximity to renewables, natural gas and storage resources, according to several people speaking Jan. 12 on a webinar sponsored by the University of Texas. In this week's highlights: Are oil prices getting ahead of the facts? How many UK generation shocks will the market absorb this winter? And how are European power traders responding to the cold temperatures in the region? Demand question marks for recovering oil, rising JKM Asian spot LNG price, power nerves set to ease?, US grains report due.

The partnership between OPEC, Russia and several other key oil producers will endure, its commitment to managing the market reinforced by the shared pain of the coronavirus crash, the bloc's secretary general said Jan. 13, downplaying recent fractious meetings.

The UAE's energy minister on Jan. 13 warned US shale producers to show restraint in the face of rising oil prices, or else risk delaying the market's rebalancing, which he predicted could otherwise be achieved by the start of 2022.

Commodities 2021: US Gulf Of Mexico Activity To Rise Despite COVID-Related Delays

Oil and gas upstream activity in the US Gulf of Mexico could pick up in 2021, even as production is expected to dip slightly because of reduced drilling in 2020 stemming from the coronavirus pandemic, analysts said this week.