After reopening to tourists on July 15, the Maldives – a nation of islands in the Indian Ocean – has seen a resurgence in coronavirus cases. The 215 new cases confirmed on Sunday brought the total to 4,164. The Maldivian government has shut down 22 local business for failing to comply with health guidelines and is reportedly considering further lockdowns, despite the economic toll of further restrictions on tourism.

Japan has seen new COVID cases spike in the past week to levels higher than those seen during the first wave of the pandemic in April. Japan’s initial approach to the crisis, which involved limited testing and no official lockdown of economic activity, was considered successful in controlling the spread of the disease. However, as bars, restaurants, and large sporting events resumed operation in June, cases began to steadily increase. Some restrictions have been re-imposed locally with limited hours for restaurants, bars, and karaoke shops in Tokyo, but the central government hasn’t taken concerted action.

Despite the surge in cases in Japan, Chief Cabinet Secretary Yoshihide Suga said Monday that the government had no intention of restricting travel during the upcoming Obon holidays. “We are not asking people to refrain across the board. We are just asking them to be very cautious,” Mr. Suga said.

Vietnam, Hong Kong, Australia, and China have also seen recent spikes in cases. Vietnam had gone almost 100 days without any new infections, but in the past week, there have been 93 reported in the city of Danang.

Vietnamese Prime Minister Nguyen Xuan Phuc said, “We have to deploy full force to curb all known epicenters, especially those in Danang. Early August will be the decisive time within which to stop the virus from spreading on a large scale.”

In Germany, political leaders were quick to condemn a large protest against measures to control the pandemic that took place over the weekend. Thousands of protesters had taken to the streets on Saturday in Berlin, most of them not wearing masks.

"Thousands of Covidiots are celebrating themselves as 'the second wave,' without distancing, without masks. They are putting at risk not only our health, but our successes against the pandemic, to revive the economy, education and society. Irresponsible!" Saskia Esken, co-leader of the Social Democrats, one of the parties that makes up Germany’s coalition government, tweeted afterward.

Today is Tuesday, August 4, 2020, and here is today’s essential intelligence.

US oil producers have started bringing some shut-in wells back online since this spring's price crash. S&P Global Platts Analytics expects the nearly all the shut-in volumes to come back by October. But US oil output will continue to decline as a result of some $41 billion in capital expenditure cuts announced by drillers this year.

—Listen and subscribe to Capital Crude, a podcast from S&P Global Platts

Leading up to the current economic downturn, state governments steadily improved their pension funding discipline while continuing progress toward reducing risk over the past year. S&P Global Ratings continued to observe states adopt more conservative actuarial assumptions and methods or direct resources into pension plans above required contributions. Meanwhile, most states neglected to leverage the expansion for meaningful progress toward improving the fiscal health of their other post-employment benefit (OPEB) plans, choosing to direct limited surplus revenues to other priorities. S&P Global Ratings views the specter of new fiscal pressures brought on by the COVID-19 induced recession and the abrupt end of one of the longest economic expansions in U.S. history a risk to future pension and OPEB funding improvements.

Road traffic levels in most of Europe's five biggest capital cites continued to slip last week compared with a year earlier, indicating moves to curb a fresh wave of coronavirus outbreaks have halted the region's fuel demand recovery. Average road congestion levels in Berlin, London, Paris, Rome, and Madrid were 38% below a year earlier in the week to August 2, down two percentage points from the previous week and back down to levels in mid-June, according to TomTom data.

Hang Seng Bank Ltd., 62.14%-owned by HSBC Holdings PLC, said its net interest margin may shrink further in the second half of 2020, as local interest rates continue to fall and loan repricing opportunities are limited. In the second quarter ended June 30, the Hong Kong lender's net interest margin stood at 1.80%, down from 2.13% in the first quarter, CFO Andrew Leung said in an Aug. 3 earnings teleconference after reporting a 33% year-over-year drop in first-half net profit.

Singapore's bank dividend cap to free up capital for lending

Dividend payouts of Singaporean banks are set to fall by at least S$2.55 billion this year, after the central bank asked lenders to conserve capital and free up cash to boost lending to aid a recovery from recession. The Monetary Authority of Singapore on July 29 directed banks to limit their dividend per share for this year at 60% of the amount paid last year. The new cap means DBS Group Holdings Ltd., Oversea-Chinese Banking Corp. Ltd. and United Overseas Bank Ltd. will be paying per-share dividend of no more than S$0.74, S$0.32 and S$0.66, respectively, for 2020.

Investor interest in private U.S. financial technology companies has remained evergreen in the face of the economic downturn wrought by the coronavirus. Funding is on track to end the year higher than 2019, both in terms of dollars raised and number of transactions: As of the first half of 2020, the amount raised was up 30.2% versus the prior-year period and volume was 14.2% higher.

Legal experts say more financial technology companies will follow Social Finance Inc.'s lead in applying for a bank charter as the regulatory environment in the U.S. becomes friendlier toward fintechs. San Francisco-based online lender SoFi applied for a national bank charter with the Office of the Comptroller of the Currency on July 8 — one of just 13 bank charter applications in 2020, according to S&P Global Market Intelligence data.

Diversity And Inclusion As A Social Imperative 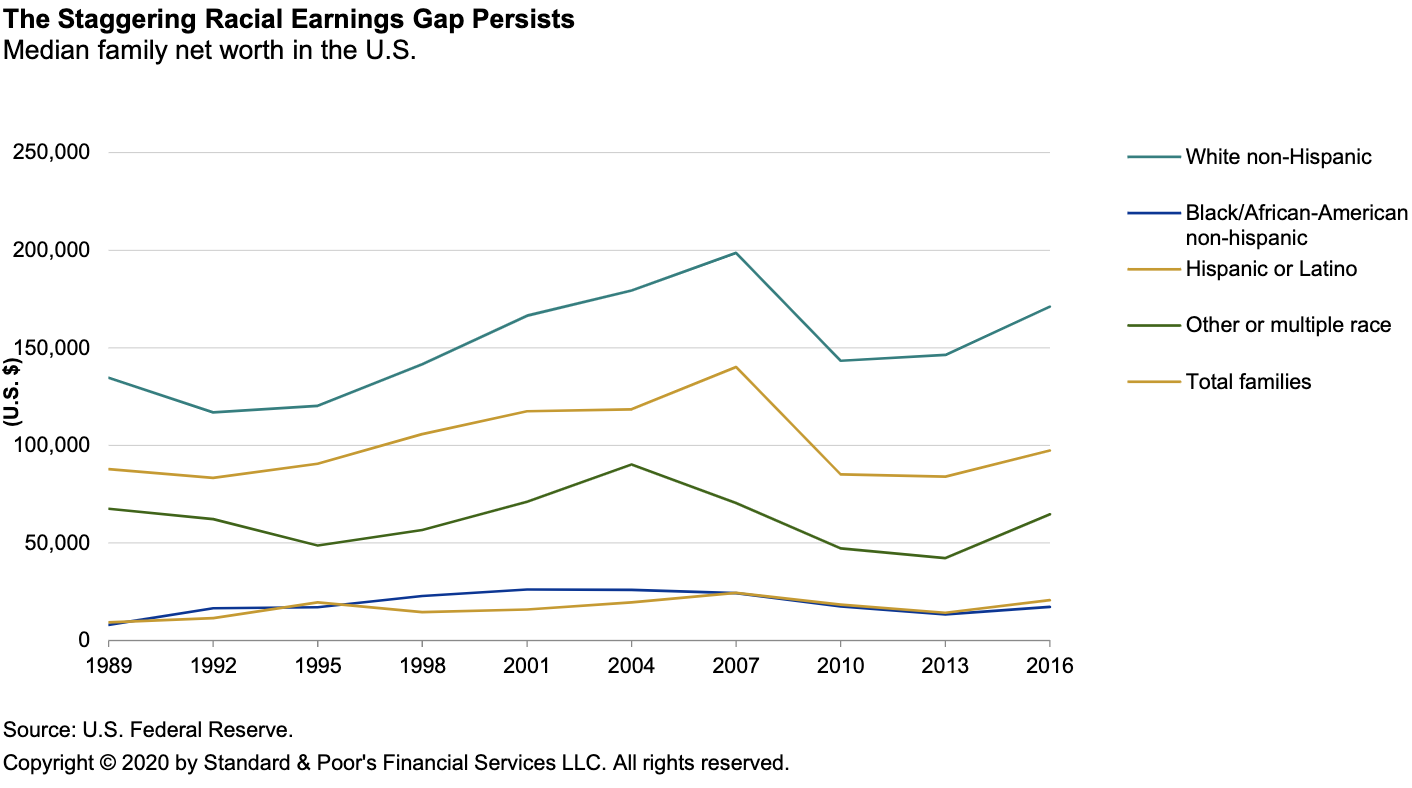 The Black Lives Matter movement has pushed the long-standing issue of systemic racism to the fore. Stakeholders' increased awareness and activism are pushing corporate transparency and accountability to unprecedented levels. As customers, employees, and shareholders are opening their eyes to the reality of what the Black community faces, they are calling on corporates to address discrimination within their organizations. The wave of advocacy for change has prompted many companies to publicly condemn racism and pledge to foster a more diverse and inclusive workforce

Climate change remains in sharp focus for European banks amid the coronavirus crisis, sustainability leaders at some of Europe's largest lenders said in exclusive interviews for the latest episode of "ESG Insider," an S&P Global podcast about environmental, social and governance issues. Banks face tough challenges as they make the transition to a more carbon-neutral economy, potentially losing business in the process.

—Listen and subscribe to ESG Insider, a podcast from S&P Global Market Intelligence

In this week's highlights: Will oil demand keep up with more OPEC+ supply? BP will outline how it's going to build back better; it's the beginning of the end for coal-fired power generation in Germany; and contract price negotiations start in the polymers sector.

Write-Downs, While Eye-Catching, Are Not The Largest Issue Facing Oil And Gas Supermajors

Write-downs and production cuts have been headline news for oil and gas supermajors since the pandemic hit the sector. These can look quite scary at first glance, and they can be significant. However, S&P Global Ratings believes they often aren't enough to trigger rating actions on their own, depending on what caused them. In fact, S&P Global Ratings views these most recent second-quarter write-downs as part of the bigger, structural issues supermajors face. These can be a short-term symptom of long-term issues—specifically lower prices.

The S&P GSCI rose 3.8% in July 2020, taking its YTD performance to down 33.9%. Weakness in the U.S. dollar against a range of currencies supported commodities. The broad U.S. dollar fell to a two-year low at the end of the month. Lower real rates, a weaker dollar, and widespread fiscal and monetary stimulus measures continued to boost demand for precious metals, which are considered a hedge against inflation and currency debasement.