As the economic recovery continues in Europe, the Middle East, and Africa, the region’s banks are emerging with strength from COVID-19 pandemic-prompted pressures.

As a foundation of normalization from the coronavirus-caused economic downturn sprouts across countries, banks previously burdened with declining asset quality and creditworthiness—alongside increasing demand for lending—are enjoying rebounding earnings and profits. The first half of this year saw robust earnings from banks in the U.K. that benefited from the release of massive credit provisions, according to S&P Global Ratings. Meanwhile, S&P Global Market Intelligence reported that Commerzbank’s 2024 profitability goal of €2.7 billion has drawn doubt from analysts over whether the German-based bank will be able to achieve its ambition after restructuring and earning enough revenue to survive deep cost cuts. The EU’s latest stress test showed that the 101 participatory banks are likely to remain profitable through 2023, regardless of whether additional credit provisions are needed over the next years. Nordic banks are likely to come out of a major economic downturn sounder than banks in other European countries, according to an S&P Global Market Intelligence analysis of the European Banking Authority's stress test results.

“While structural profitability may still prove vulnerable under certain scenarios, the banks are showing improved resilience overall,” S&P Global Ratings said in a recent report on the results of the 2021 stress test. “At this point, we don't expect the results of the stress tests, including possible capital return, to lead us to change ratings on any of the banks that were tested. While we will dig deeper into the results on individual banks and discuss the results with management, we saw no major surprises in the results. Our ratings typically already incorporate a forward-looking expectation of a moderate reduction in capital ratios as distributions restart.”

"Currently, there are very few compelling offers targeting these customers in the UAE or Saudi Arabia, so we believe that the first digital banks with a compelling product offering and superior customer experience will be able to grab a share of the market," Jorge Camarate, a financial services practice leader in the Middle East and partner with Strategy&, part of the PwC network, told S&P Global Market Intelligence.

The post-pandemic future will likely involve additional challenges. In the immediate term, Spanish banks are operating in the face of union pushback, and other European banks are selling off their payment entities after suffering from specialist competition. Investment banks across the Middle East, North Africa, and Turkey have endured a shortage of necessary talent.

“Talent is very hard to come by. For the past five years, international banks operating in MENA have been redeploying assets and people to different geographies. A lot of people have also left the industry,” Nabil Lahham, HSBC Holdings PLC's head of advisory and investment banking coverage in MENA, told S&P Global Market Intelligence. “We're an apprenticeship business. We need to bring in people to learn the business. It's almost like being in the movie industry: you do one movie and move to the next one. It's a project-based approach and every deal is unique. The learning curves are extremely steep. So, if you lose nearly two years, like we have done due to the pandemic, it's almost like four years in any other industry.”

Today is Friday, August 20, 2021, and here is today’s essential intelligence.

Indian banks' prior efforts to strengthen their balance sheets will help them mitigate the impact of asset quality as bad loans ticked higher in the April-to-June quarter following a deadlier wave of the COVID-19 pandemic. State Bank of India, the country's largest lender by assets, reported total nonperforming loans of 1.36 trillion rupees for the fiscal first quarter that ended on June 30, up from 1.28 trillion rupees in the previous three months and 1.31 trillion rupees in the same period of 2020.

Australia's biggest banks are flush with surplus capital from asset sales and government support in the pandemic year, but they cannot outrun the drag from low interest rates, analysts say. The nation's big four — Commonwealth Bank of Australia, Australia and New Zealand Banking Group Ltd., National Australia Bank Ltd. and Westpac Banking Corp. — accumulated surplus capital in 2020 and have now started to returning some of it to shareholders via higher dividends and share buybacks. The Reserve Bank of Australia's Term Funding Facility, or TFF, provided A$200 billion in cheap funding to the banks and the sale of many noncore businesses brought in cash, greatly boosting their capital ratios and profits.

What The $14.2B Affordable Connectivity Fund Could Mean For Broadband Providers 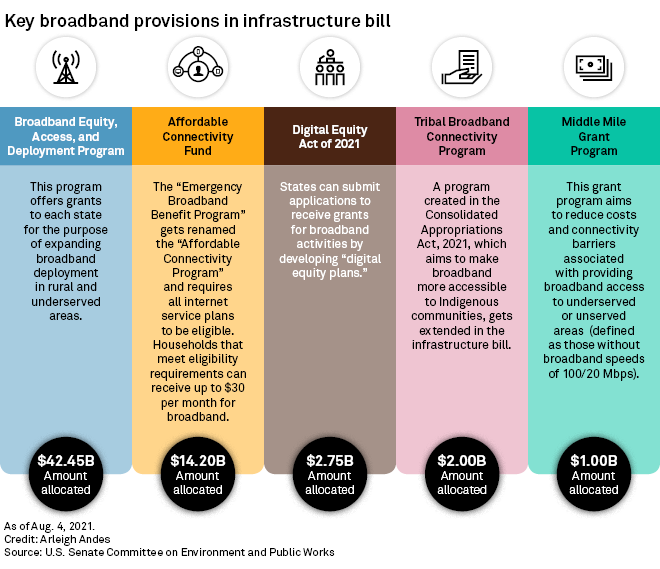 The U.S. Senate's $1 trillion infrastructure bill puts low-income Americans one step closer to a permanent broadband subsidy, but how that could force service providers to change their current low-income internet offerings remains to be seen.

After T-Mobile Breach, Security Concerns May Be An 'Assumed Risk' – Analysts

A security breach at T-Mobile US Inc. exposed the personal data of more than 40 million customers, but analysts do not expect consumers to hang up on the wireless carrier. T-Mobile said Aug. 18 that a subset of company customer data had been accessed by unauthorized individuals. This subset included just over 40 million records of former or prospective customers who had previously applied for credit with the carrier, as well as 7.8 million current T-Mobile postpaid customer accounts' information. While no customer financial information, including credit or debit card numbers, appears to have been breached, some of the data accessed did include customers' first and last names, dates of birth, social security numbers and driver's license information. 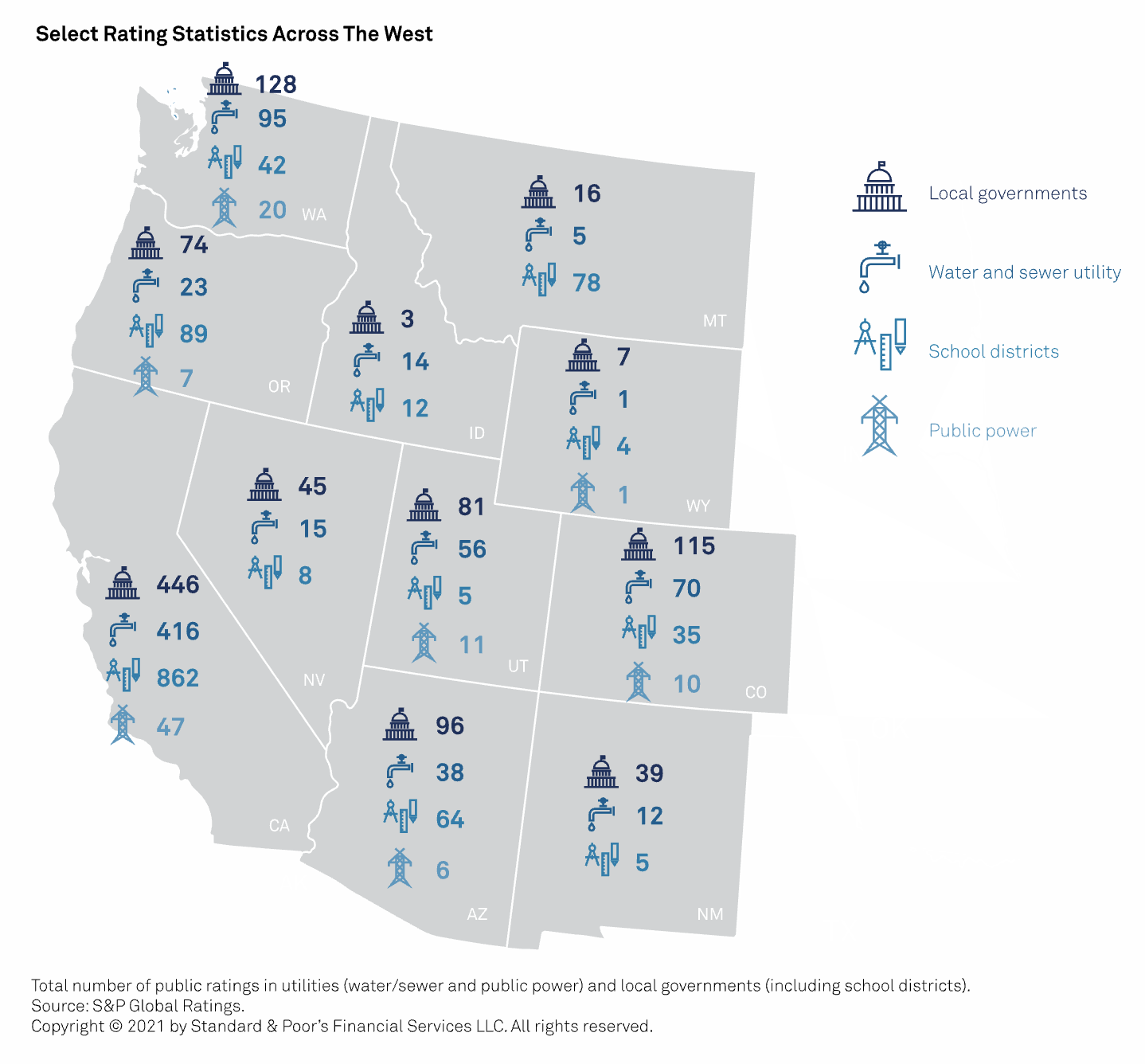 The chair of the UK's hydrogen industry association has resigned over a "deep personal conviction" that fossil fuel-derived blue hydrogen is one of many "wrong answers" in the quest for decarbonization.

Caught in a fierce race to become more sustainable, oil majors, startups and downstream producers are navigating regulations, funding models, and technological developments to stand out as industry leaders in an emerging market. Bionaphtha, a more sustainable but functionally equivalent alternative to fossil-based naphtha, is projected to grow substantially in demand in order to supplement its oil-derived predecessor as a petrochemicals feedstock and gasoline blendstock.

The UK government has granted a combined GBP91.7 million ($125.5 million) in funding for four projects developing green technology in the auto sector. The four projects have been awarded the government and industry funding through the Advanced Propulsion Centre (APC) Collaborative Research and Development competition, which was founded in 2013 to support the development of innovative low-carbon automotive technology. 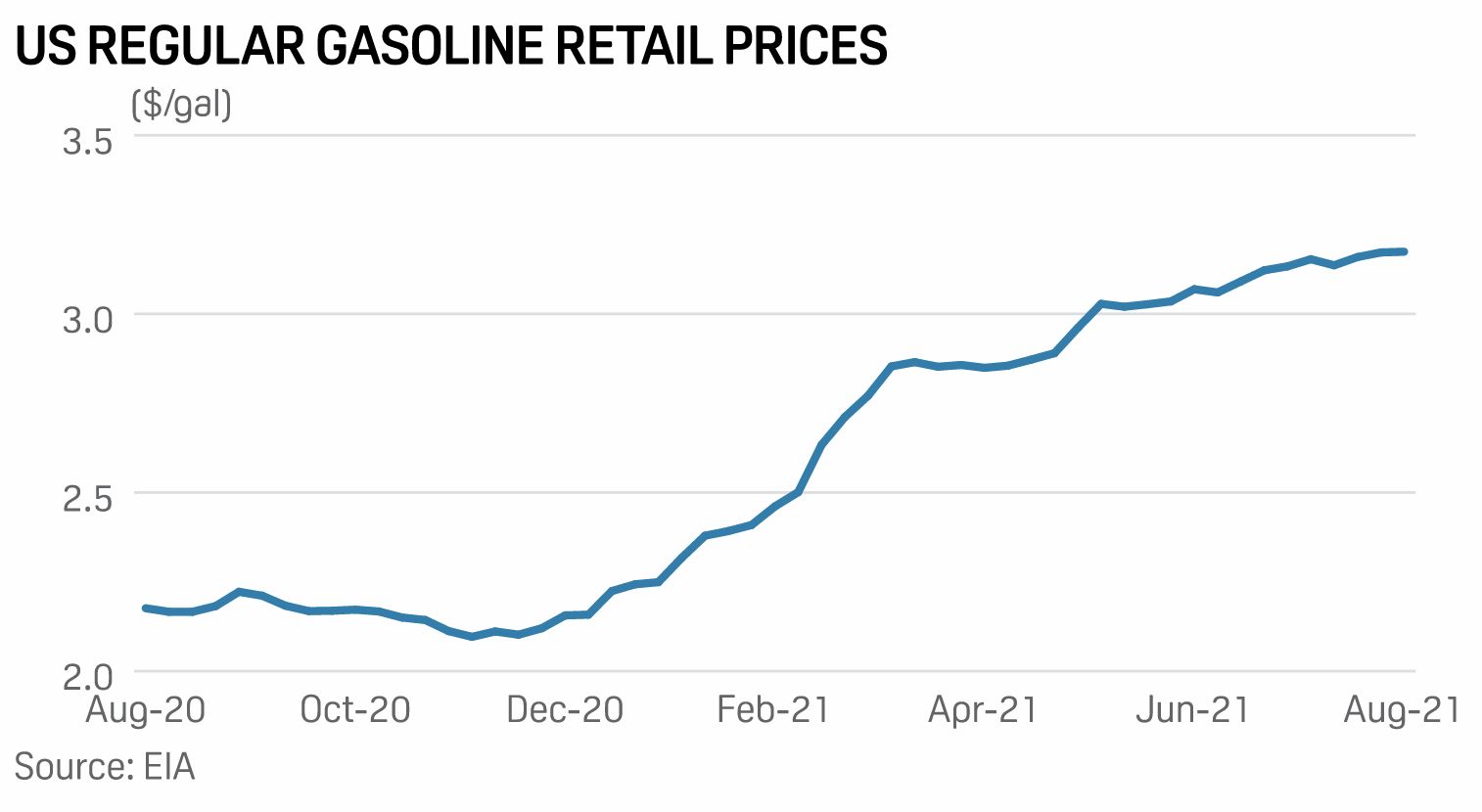 President Joe Biden is facing increasing criticism over his response to rising gasoline prices, ironically uniting progressives and conservatives and oil companies and biofuels producers in their displeasure with the White House seeking foreign help to address a domestic supply-demand imbalance for oil and gas.

Iran's LPG exports are set to stay near two-year peaks of around 500,000 mt in July and August, meeting China's voracious appetite for cheaper petrochemical feedstock given the increase in the number of its propane dehydrogenation plants, trade sources said.

Vietnamese refiners and oil distributors are grappling with excess oil stockpiles as domestic fuel consumption tumbled in recent months amid a resurgence in COVID-19 cases, prompting the Southeast Asian country to ramp up crude exports and slash oil product imports in the near-term trading cycles.

ConocoPhillips' multibillion-dollar Willow North Slope oil project suffered a setback in federal court Aug. 18 when US District Court Judge Sharon Gleason voided permits and rights-of-way granted by the US Bureau of Land Management that were challenged in lawsuits filed by conservation groups. Alaskans are now left to assess the impact of the federal court decision on Alaska's North Slope from the lawsuit brought by conservation groups.