Following President Xi Jinping’s September 2020 announcement of China’s goal to reach carbon neutrality by 2060, the world’s highest emitter and biggest consumer of electricity is implementing voluntary carbon markets, green bonds, and energy transition targets to push forward its shift to a more sustainable economy. China’s climate action may not be as aggressive as many market participants believe is needed to accelerate the advancement of a green global economy, but are likely important building blocks to reach sustainability.

In late April, the Chinese government promised to "strictly control coal-fired power generation projects" and "strictly limit the increase in coal consumption" as part of its Five Year Plan through 2025, after which China said it will phase coal out of its energy mix to make way for renewables. S&P Global believes China missed an opportunity to accelerate progress toward net-zero carbon emissions by 2060 in its Five Year Plan due to its efforts to achieve supply-chain security in strategic sectors that could ultimately encourage more investment and manufacturing, and also delay the transition from coal. Additionally,  the country’s renewable energy sector has faced allegations of human rights abuses. China will submit highly awaited new nationally determined contribution targets and corresponding implementation plans to the U.N. COP26 summit in November, which will include a carbon-peaking action plan, net-zero roadmap, and detailed plans for individual sectors, Xie Zhenhua, China's special envoy on climate change, said on Aug. 3 at an event hosted by a Hong Kong think tank, according to S&P Global Platts.

China launched its long-awaited carbon emissions trading system, starting with its power sector, on June 16 after the introduction of the system was postponed due to the country’s caution over how an unregulated carbon market could socioeconomically affect different provinces. First-day activity was frenzied and showed promise for the world’s largest voluntary carbon market. In its initial weeks of operation, China's carbon price was steady at $7.88-$8.76/mt—too low to both drive significant decarbonization across the power sector or incentivize a large-scale fuel switching away from coal, according to S&P Global Platts. As time has progressed, Chinese traders have maintained attentive awareness of the new trading system’s activity as the market will  likely encompass the country’s steel, building materials, petrochemicals and other chemicals, nonferrous metals, paper, and aviation industries by 2025. Experts who helped to design the system have said that China's carbon market is more likely to resemble a marathon with long-term climate goals than a 100-meter dash focused on immediate and heavy-handed directives to cut emissions.

China’s broad net-zero  targets to cut down on carbon emissions have sent green bond issuance soaring. Chinese companies sold $18.1 billion of green bonds in the second quarter, the most since the $18.7 billion in the third quarter of 2019, according to the U.K.-based green bonds tracking agency Climate Bonds Initiative. Including only the 53% of Chinese green debt issued that met international standards, the country was the world's third-largest issuer of green bonds, surpassed by Germany and the U.S., in April-June. The remaining 47% of green bonds issued in the second quarter follow local definitions allowed by China, which permits companies to  allocate up to half of proceeds to general corporate purposes rather than green assets, according to S&P Global Market Intelligence.

"China is focused on advancing its domestic climate agenda, and this includes preparing its domestic capital markets to play a role in financing the country's net-zero transformation … We would expect to see continued rise in domestic green bond issuance within China, given the breadth and scale of the challenge and financing needed for China to transition to a net-zero model,” Paul Lukaszewski, head of corporate debt for Asia and Australia at the asset management firm Aberdeen Standard Investments, told S&P Global Market Intelligence. "We believe China will continue its process of bringing its domestic green bond framework to more closely align with international frameworks … But in the interim, as domestic Chinese green issuance picks up in response to the government net-zero target, we think it is likely that non-aligned issuance will remain a meaningful part of the global green bond market.”

China is one of many powerful countries worldwide looking to a greener future. The U.N.'s latest Intergovernmental Panel on Climate Change report, released last week—with the damning outlook that global warming could reach as high as 1.7 degrees Celsius relative to pre-industrial times by 2040 regardless of net-zero targets, and suggesting the world is at or near the tipping point for certain climate effects, such as sea-level rise and ocean acidification—advises corporations and governments that the urgency to lower emissions and adapt to the effects of climate change at a more rapid pace and bigger scale is of matters of life and death, according to S&P Global Sustainable1.

Today is Tuesday, August 17, 2021, and here is today’s essential intelligence.

U.S. Real-Time Data: Consumers are Wary of A COVID Resurgence Amid A Recovering Labor Market 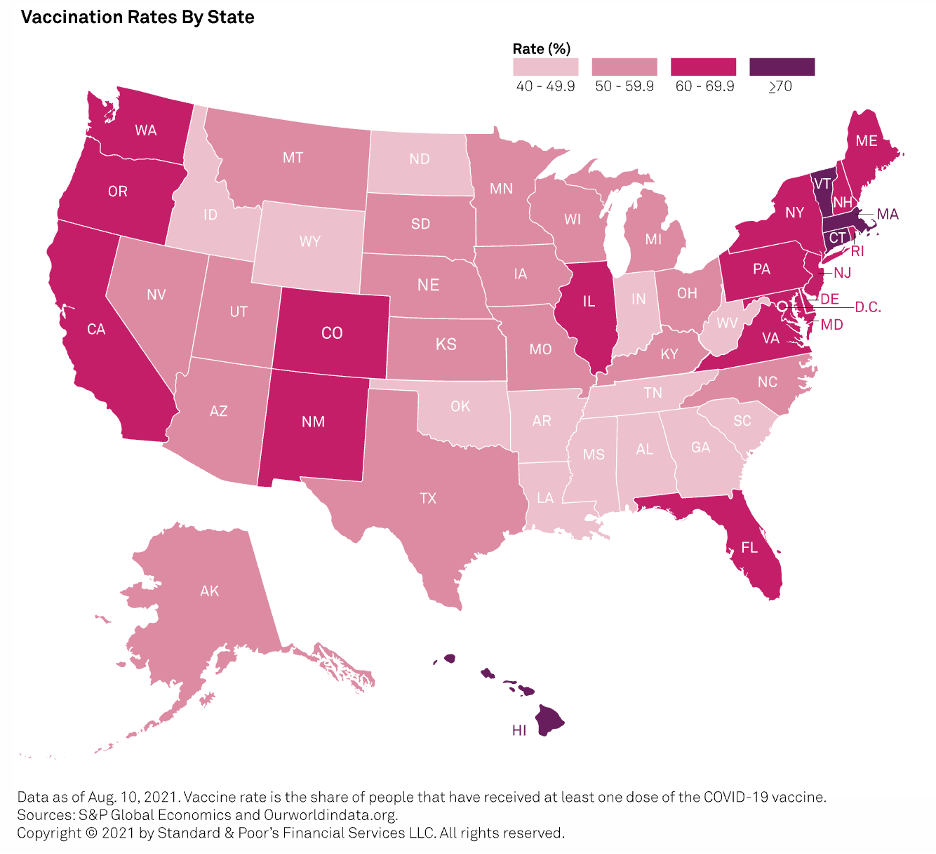 The U.S. saw a new wave of COVID-19 infections, especially delta variant cases, in the past week, encouraging more folks to get vaccinated. The share of the population with at least one dose of the vaccine increased to 59% as of Aug. 10, from 55% a month ago.

Japan's top airline All Nippon Airways said Aug. 16 that its international passenger demand surged by 127.8% year on year during the country's peak summer holiday season over Aug. 6-15 by taking in incremental demand from the Tokyo Olympics, supporting the regional jet fuel demand. 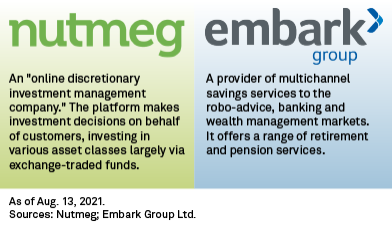 Banks in the Nordic region would emerge far stronger from a major economic downturn than those in other European countries, an S&P Global Market Intelligence analysis of the European Banking Authority's 2021 stress test results shows.

Representative Sean Casten, Democrat-Illinois, has not been shy in sharing his belief that the Federal Energy Regulatory Commission will be essential in combatting climate change and pivotal to achieving the US' ambitious clean energy and decarbonization goals. To get the message across and garner support for legislation aimed at granting FERC greater authority to facilitate the shift to a clean energy economy, the congressman has put his spin on Megan Thee Stallion and Fergie hits while delivering remarks on the House floor. Jasmin Melvin spoke with Casten, a member of the House Select Committee on the Climate Crisis and a former energy industry executive, about his tactics, FERC and climate policy. They talk about the need for power market design reforms, biofuels' role in reducing carbon emissions, and concerns that Congress is not acting with the urgency the climate crisis demands.

California has what most states do not: a legislature, governor and state agencies all working in tandem to make deep greenhouse reduction cuts and reach carbon neutrality, perhaps as early as 2035.

Bank of America Corp. has been scaling up its commitment to fund the climate transition, setting a goal of $1 trillion of financing by 2030 for projects and investments to reduce carbon emissions and address other environmental needs.

Saudi Aramco is investing, alongside the country's sovereign wealth fund and Riyadh-based ACWA Power, in the oil exporter's largest solar project with a capacity of 1.5 GW as the world's biggest energy company makes a push into renewables. 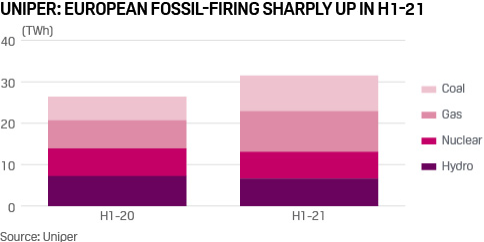 High global gas and LNG prices are impacting the power mix in countries as far apart as Germany and Bangladesh. Plus, Middle East-China tanker freight rates, US gas prices and Asian refining.

Crude oil futures were lower during mid-morning Asian trade Aug. 16 as investor concerns over the fast spreading delta variant resurfaced amid restrictive movement curbs in oil consuming giant China and growing number of cases in the US.