The Russian Ministry of Health announced on Aug. 11 that it had approved the world’s first COVID-19 vaccine—for a treatment that has been tested in just 76 people.

“Russia has always been at the forefront of vaccine research,” Kirill Dmitriev, CEO of Russia’s sovereign wealth fund RDIF, told CNBC in an interview this week.

"Having a vaccine, and proving that a vaccine is safe and effective are two different things. If we wanted to take the chance of hurting a lot of people, or giving them something that doesn't work, we could start doing this, you know, next week if we wanted to. But that's not the way it works," Dr. Anthony Fauci, the director of the U.S. National Institute of Allergy and Infectious Diseases, said during an Aug. 11 panel organized by National Geographic, expressing reservations about the Russian vaccine.

According to a Russian government spokesman, the vaccine had been developed by the Gamaleya Research Institute of Epidemiology and Microbiology in Moscow. Russian officials insist the new vaccine is safe and has passed all the necessary controls, going so far as to say it had been in development for over six years despite the first case of the novel coronavirus disease having been reported in China on Dec. 31 of last year. Russian officials said the vaccine will initially be given to a small number of citizens from vulnerable groups, including medical staff and the elderly. The country’s Ministry of Health stipulated that the vaccine can’t be disseminated to the broader population until Jan. 1.

The vaccine has been branded as “Sputnik V” for foreign markets, a reference to the Soviet Union’s space program of the 1950s and 1960s, which propelled Russia’s early lead in the so-called space race against the U.S.

Companies and governments around the world have been rushing to develop a vaccine to treat COVID-19, which has claimed more than 750,000 lives worldwide, according to Johns Hopkins University data. When vaccines are submitted for clinical trials, they undergo three phases. Phase 1 trials test the vaccine’s safety with a small number of participants to determine appropriate dosages and identify side effects. Phase 2 trials explore safety and efficacy within a larger group of people. Phase 3 trials involve thousands of people to confirm the medicine’s effectiveness and test for rare or more harmful side effects. As such, Russia’s decision to release a commercial vaccine after the equivalent of Phase 1 trials is unusual.

Russia dismissed the international community’s concern about their rush to release a vaccine. "It seems our foreign colleagues are sensing the specific competitive advantages of the Russian drug and are trying to express opinions that ... are absolutely groundless," Mikhail Murashko, the Russian health minister, told the country’s Interfax news agency on Aug. 13.

Dr. Fauci cautioned that announcements of this kind from Russia or China should be considered skeptically, because those countries have different safety standards for new vaccines than developed nations like the U.S.

Philippines President Rodrigo Duterte offered on Aug. 11 to take the new Russian vaccine live on television, although his office later walked back the commitment. The country’s official newswire, the Philippine News Agency, reported on Aug. 12 that the country will participate in the vaccine’s third phase of clinical trials as soon as October of next year.

“We were just fortunate that the coronavirus was very close to MERS [the Middle East Respiratory Syndrome, a previous coronavirus pandemic], so we pretty much had a ready-to-go vaccine on MERS, studied for two years on MERS [and] slightly modified to be the coronavirus vaccine, and that is the real story, no politics,” Mr. Dmitriev said in the CNBC interview.

Meanwhile, in the U.S., which features the highest total of coronavirus cases and death of any country worldwide, “the FDA is not loosening any standards, so [it’s] business as usual—whatever portfolios or dossiers that we bring to the FDA have to meet rigorous standards,” Julie Gerberding, the Executive Vice President and Chief Patient Officer at the pharmaceutical company Merck & Co., told U.S. lawmakers on July 21.

Today is Friday, August 14, 2020, and here is today’s essential intelligence.

Take Notes host Tom Schopflocher talks to credit analyst Casper Andersen about the current state of German covered bonds, or Pfandbriefe. Germany has the second-largest covered bond market and the largest euro benchmark market, with outstanding issuances totaling €355 billion in 2020. German covered bonds should be able to withstand the challenges created by COVID-19, and despite little room for change, new green and social German covered bonds are spurring investor interest.

Arete Capital Partners is spinning out acreage north of its resurrected Stawell gold mine in Victoria, Australia, into North Stawell Minerals Ltd., which plans to list Sept. 16 on the ASX in an IPO priced at 50 Australian cents per share as it seeks further multimillion-ounce deposits. Arete manages Stawell for Stawell Gold Mines, a conglomerate of investors including private equity firm Victor Smorgon Group and a syndicate of Asian investors. The investors will own 66% of North Stawell once it lists with a market capitalization estimated at A$60 million.

Lawsuits in two professional sports leagues over denied pandemic-related business interruption claims are asking insurers to cover losses that may be beyond the boundaries of their policies. Tilman Fertitta, the owner of the National Basketball Association's Houston Rockets and the team's home arena, is suing Affiliated FM Insurance Co. for not being able to access his $400 million policy to recoup losses stemming from the suspension of the NBA regular season, and from canceled events at the Toyota Center.

India May Have Limited Options To Turn Around State-Owned Banks 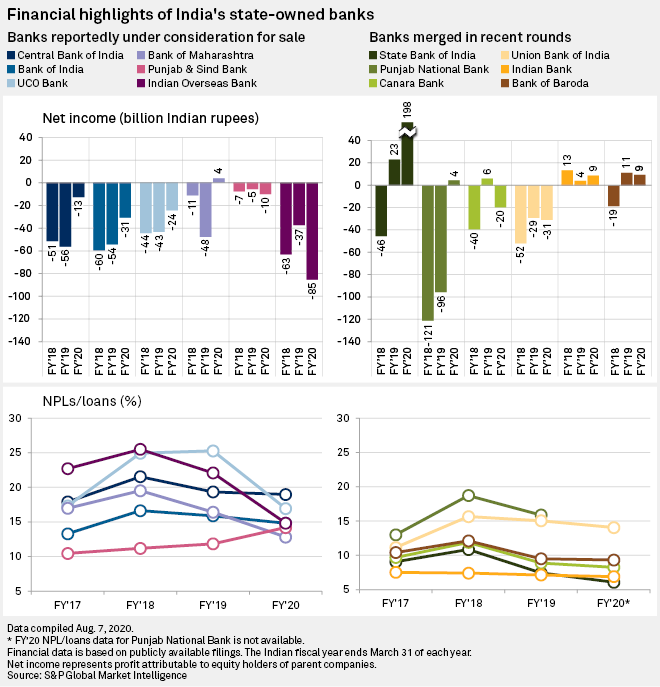 The Indian government's reported plan to sell majority stakes in its relatively weak banks will require changes to the law and private buyers may not be keen. Instead, the government may need to consider another round of consolidation among state-run banks, analysts say. The government said in May that it will formulate a new public-sector enterprise policy and have no more than four government-owned companies in strategic sectors. Recent media reports said state-owned banks will be included in the policy and the federal government may sell its majority stakes in some of the dozen banks it still owns.

What Lies Ahead For U.S. Bank Provisions For Loan Losses

With the economic downturn caused by the coronavirus pandemic, U.S. banks have had to prepare for the likelihood of elevated borrower defaults and have more than doubled their allowances for loan losses. This, on the back of about $115 billion of provisions in the first half of 2020, represented major progress toward absorbing the loan losses likely to result from the economic downturn. Still, while the pace of provisioning may slow, S&P Global Ratings believe U.S. banks in aggregate are far from done with provisioning for pandemic-related losses. S&P Global Ratings’ base case projection is that the pandemic will trigger 3% loan losses, forcing banks to provision more than $330 billion cumulatively.

U.K. Banks’ Creditworthiness Will Be Tested As Fiscal Support Ebbs

The COVID-19 pandemic and subsequent lockdown in the U.K. has arguably exposed domestic banks to the biggest economic shock since the 1980s. Moreover, this is the first real test of the regulatory overhaul since the financial crisis a decade ago that demanded increases in bank capitalization and liquidity, in particular. After scrutinizing U.K. banks' first-half results, S&P Global Ratings continues to see only a marginal increase in the risk that credit losses will rise to materially above 100 basis points of domestic lending this year. 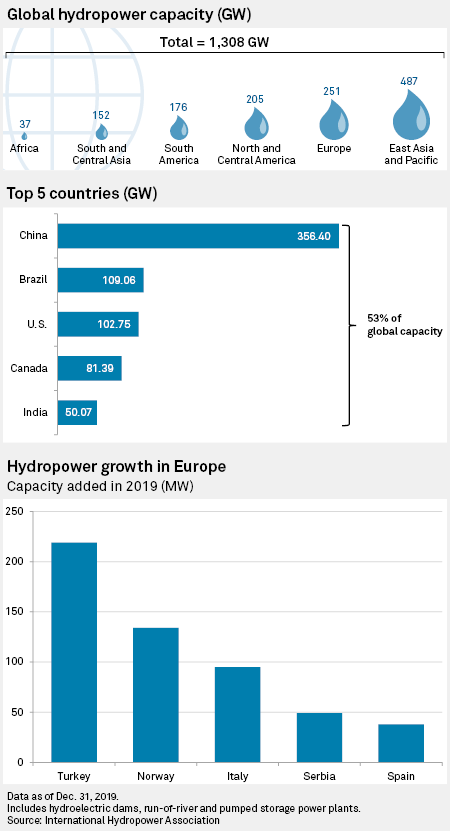 When Arild Tanem started working for Statkraft AS as a market analyst in 1995, he imagined little would change about the core commodity managed by Norway's state-owned power utility: the water stored behind its dams and flowing through the rivers that criss-cross the country and produce virtually all of its electricity. Fast forward 25 years, and Tanem oversees Statkraft's entire hydropower portfolio in the Nordics, close to 300 power plants that hold almost a quarter of Europe's entire reservoir capacity. Aside from his job title, Tanem has seen another marked change in the intervening years: Annual hydro generation in Norway has grown by more than 10% and continues to rise. "A small part of that are new power pants," Tanem, now the company's senior vice president of energy management, said in an interview. "But the main increase is climate change."

Major oil and gas trade groups Aug. 12 expressed confidence in their readiness for a busier-than-usual hurricane season in 2020, even with added logistical considerations stemming from the coronavirus pandemic. The National Oceanic and Atmospheric Administration has forecast that the 2020 Atlantic hurricane season carries a 70% probability of three to six major storms of Category 3 or higher. A total of seven to 11 hurricanes are expected, during the season that runs from June 1 through November 30, including two to date.

A group of moderate UK politicians, making up around a third of the ruling Conservative party, has backed calls by green groups for the government to bring forward a ban on sales of new gasoline and diesel vehicles by five years to 2030. Sales of conventional cars should be phased out by 2030 in order to boost investment in electric vehicles and public charging networks as part of green recovery policies, the One Nation Conservatives group said in a report Aug. 13.

The US recycled PET market has begun to open up again, following significant disruptions at the height of the coronavirus pandemic that led to nine out of ten bottle bill states forgoing their recycling commitments. At its height, recyclers in California were reporting as much as a 70% drop in Grade A post-consumer PET bottle bale supply and many material recovery facilities (MRFs) across the west coast and mid-west region were either shutting shop or reducing production significantly. 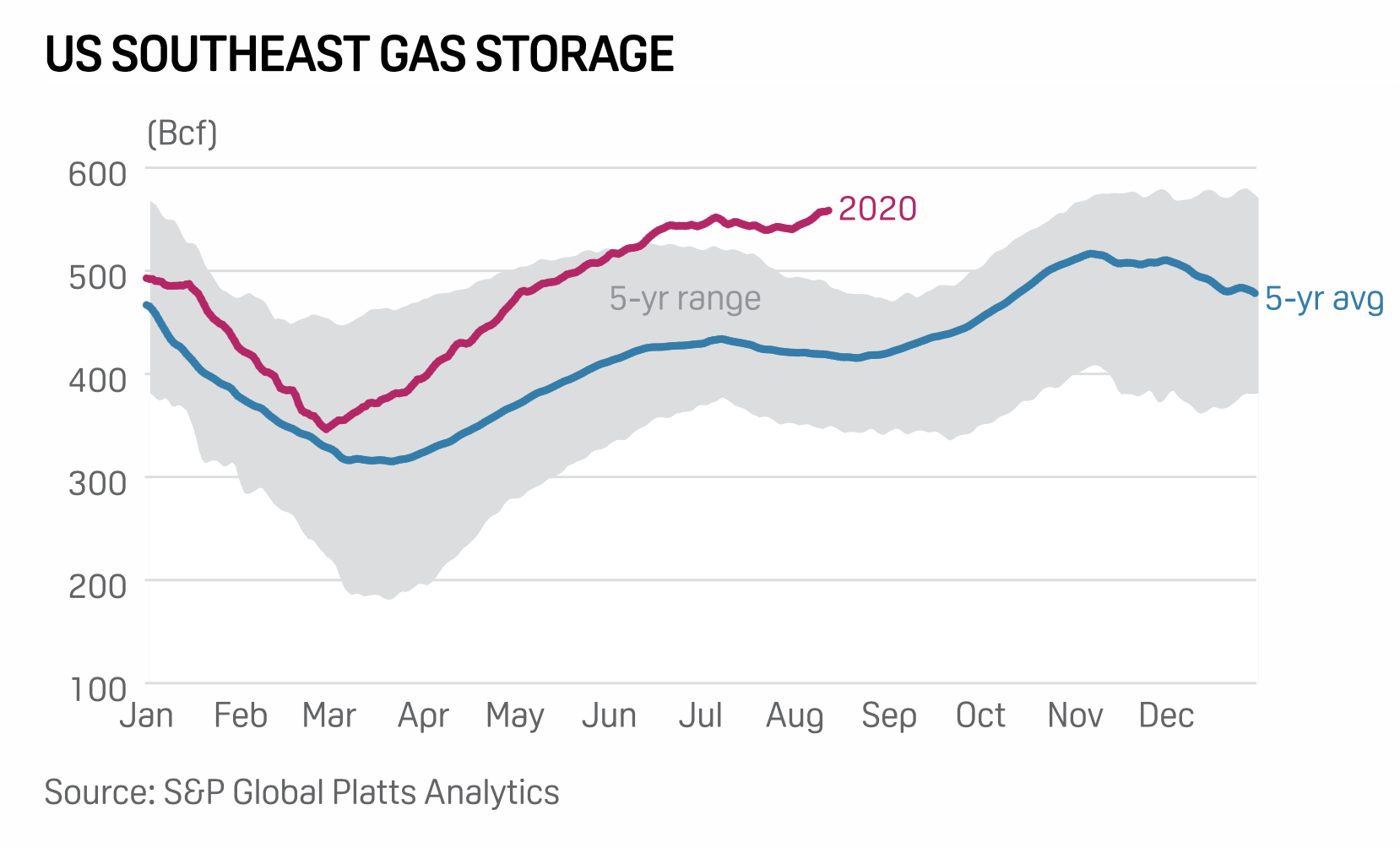 Natural gas storage inventories in the US Southeast continue building this month as the potential for a truncated regional injection season looms large over a recent price rally at the Henry Hub. On Aug. 12, modeled Southeast storage was estimated at over 558 Bcf. Inventory levels are now just 20 Bcf, or about 3.5%, shy of the region's demonstrated maximum capacity at 578 Bcf in December 2015, data compiled by S&P Global Platts Analytics shows.

The German port of Mukran is expected to continue normal operations despite a direct threat of US sanctions against the facility because of its involvement in the Nord Stream 2 gas pipeline project, the energy ministry of the state of Mecklenburg-Western Pomerania said Aug. 13. Last week, three US senators sent a letter to two senior officials at the port, saying the facility was "knowingly" providing support to Nord Stream 2 and that this could expose the port to US sanctions.