The Essential Podcast, Episode 8: The Road Forward – Infrastructure and Recovery

- Large developers' contracted sales dropped in the first two months but we expect a near-term recovery and mild overall downturn.

- We expect further reshuffling and credit divergence as developers battle for scale and market share.

Apr. 04 2019 — China's property market slowdown is throwing up some surprising data. Several major developers have logged sharp declines in sales, whereas usually it's the little guys that are first to plunge. Another surprise is robust offshore investor demand for sector debt, given overall uncertainty. What to make of the mixed signals? S&P Global Ratings believes that developers' performance could vary drastically as China's residential property markets cools. Overall, however, this downturn will not be as severe as the last one, in 2014.

China's three largest developers saw head-turning declines in sales in the first two months of the year: China Evergrande Group (-42%), Country Garden Holdings Co. Ltd. (-16%), and China Vanke Co. Ltd. (-11%). In comparison, national residential property sales grew 4% over the same period (see chart 1). This is contrary to our expectations that most rated developers would grab more market share amid a downturn in 2019; instead, our rated developers have, on average, seen slighter weaker sales than the national average in the first two months.

We anticipate a lot of divergence among our rated developers. Our net rating outlook bias is slightly negative, reflecting refinancing and other concerns for our weakest operators. However, many sector companies have prepared for this year's downturn, by cutting costs and downsizing growth aspirations. Improved financing conditions also point to reasonable stability in a softening market. Inventories are lower than in the last cycle, with sales recovery already in sight. We expect many rated developers to fend off challenges and continue efforts to maintain their scale and seize market share. That said, the record debt issuance so far this year could come back to bite, if this downturn is graver than we forecast.

Having experienced a few cycles since the Global Financial Crisis, Chinese developers appear to be more proactive in managing their spending ahead of cycle turns. For example, many companies among our rated universe cut down land purchases last year amid tighter funding conditions; even though contracted sales for most still grew strongly at over 30% in 2018. In our view, developers are on a better footing compared with the 2014 downturn , when they only started cutting down spending after sales started plunging (chart 2).

We estimate that rated Chinese developers' land acquisitions dropped by an average of 32% in 2018 (chart 3). This is similar to 2014, but we believe the effect will be bigger from a cash-flow perspective, given the proportional outlay on land fell to a new six-year low of 23% of contracted sales (chart 4). In fact, some of the developers with weaker sales in the first two months of 2019 actually led the pack to rein in spending, with Evergrande and Country Garden's land acquisitions dropping by 53% and 30%, respectively, in 2018. Some developers known for their previous aggressive expansions also lowered land purchases early, such as Ronshine China Holdings Ltd. and Sunac China Holdings Ltd.

This Downturn Will Likely Be Milder Than The 2014-2015 Cycle

The current slowdown is likely to be milder because the market is not plagued by deep structural imbalances. The 2014 cycle turned following excessive land-supply releases by governments in 2013 and aggressive land-banking by developers in a red-hot market. Many lower-tier cities in particular were flushed with inventories. Market prices and volumes rapidly lost momentum, a phenomenon that was almost synchronized across all cities in the second half of 2014 (chart 5).

Supply-demand imbalances look more manageable this time around. For example, inventories in lower-tier cities averaged slightly over 10 months of 2018, compared with over 25 months in 2013-2014. Moreover, while slowing economic growth and uncertainty are clearly factors in weaker demand, the sector has also been subject to a lengthy round of policy restrictions to cool excesses. These include most recently the scaling-back of monetary compensation for shantytown resettlements. However, such policies can be fine-tuned or unwound to stimulate demand if needed. We also believe these broader developments will continue to have uneven impact. Demand in higher-tier cities is still relatively intact, driven by better economic prospects and continual population inflow.

Developers' previous expansion into lower-tier cities is one key factor behind declining sales in the first two months, in our view. Others include the base effect of falling from last year's high perch, or developers' own tactics to reduce launches in uncertain markets awaiting better signals.

The worst part of the slowdown could be near. As we head into second quarter, the market is likely to show signs of thawing. Sales have already recovered somewhat in March judging by the weekly sales figures from key cities, likely triggered by the moderate easing of mortgage rates (chart 7) and administrative measures such as further selectively relaxing price caps and purchase restrictions.

However, a sharp rebound as in 2015 is also unlikely to occur. Most overarching restrictive policies remain in place, and national shantytown redevelopment volume is set to decline with less monetary compensation in 2019. Even if credit conditions have improved, we do not envisage any major credit stimulus into the sector, or a broad loosening of monetary policy.

We expect more developers to tap offshore bonds given favorable conditions, strong investor appetite, and regulatory green lights. Offshore issuance by Chinese developers jumped 32% year-on-year so far this year, to a record US$24.2 billion. Therefore, the refinancing risks for the US$17.4 billion pre-existing offshore bond maturities in 2019 looks largely manageable.

On the flip side, longer-term risks could rise. Developers are now issuing beyond their offshore refinancing needs, while tenors remain ever shorter despite their more recent attempt to extend as soon as demand allows. Although some higher-rated developers did issue at five-year tenors--examples include China Vanke Co. Ltd., China Resources Land Ltd. and Shimao Property Holdings Ltd.--average tenors remained only at 2.8 years year-to–date, compared with about four years in the same period 2017.

We expect the wave of issuance this year to push and elevate the maturity wall to a new height of over US$40 billion in 2021. Some developers will have to undertake particularly large offshore refinancing in 2020 and 2021 compared to their scale (see chart 10). Although this is partly due to historical preference for offshore funding, it will nonetheless add to larger concentration risks. The refinancing market is set to become crowded in those years, especially in the first quarters. 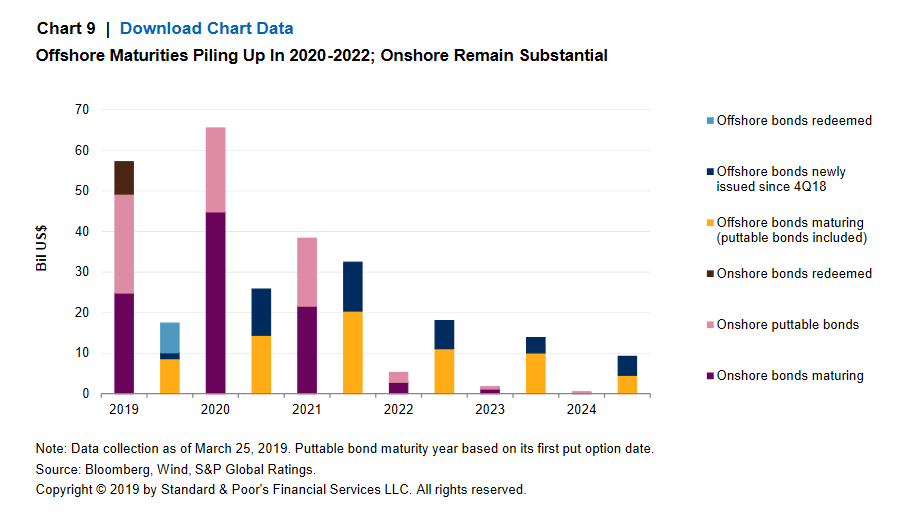 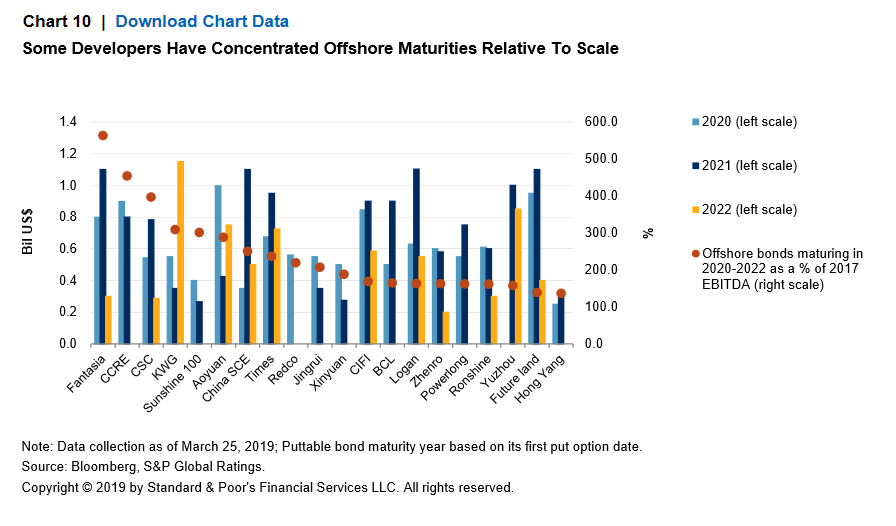 Furthermore, onshore refinancing pressure remains pressing and sizable with more than US$50 billion equivalent due in 2019 alone, while total domestic issuance year-to-date amounts to only around US$7 billion. Domestic funding conditions may further ease as authorities are encouraging a reopening of corporate access to funding. However, we don't expect a flood of domestic issuance, as in 2015. New issuance unlikely to be approved well above levels for refinancing needs.. In addition, conditions will remain challenging for weaker credits under liquidity strain, given small local developer defaults in 2018.

We expect generally stable credit profiles for the sector in 2019 overall. Although our net outlook bias is still tilted towards the negative, it is substantially lower than the 30% level of negative bias seen in 2014-2016. Yet this does not mean less polarization. In fact, we expect both positive and negative rating actions to take place amid varying performance and strategies as companies maneuver through the slowdown. In past two to three years, these "non-stable" outlooks consistently accounted for about 30% of the total.

What Could Startle The Government To Change Its Stance?

At this point, we believe the government can tolerate this level of property market slowdown. While we have seen some restrictions loosening, policymakers appear cautious of substantially reversing efforts. So long as economic growth remains in line with China's expected range, we do not expect major unwinding, let alone stimulus. This stance is only likely to change if China's softening property market begins to weigh too heavily on overall growth. The most straightforward indicator is real estate investment growth, which remains in expansionary mode: growing 11.6% in the first two months of 2019. History has also shown that a sharp decline in that metric could incite expansionary property policies.