Sentiment in China’s metals markets was buoyant in July and August on easy credit conditions and expectations of further stimulus flowing to infrastructure. But September saw a distinct change of tone as cash flows tightened, demand waned and metals prices came under pressure, leaving the market hoping for better after China’s Golden Week holiday. Paul Bartholomew discusses what could happen in coming months.

Money’s too tight to mention

Beijing unsurprisingly opened the monetary sluice gates to support the economy as China emerged from the lockdown in late March. This had two notable effects on the steel and metals sector: It meant traders were not obliged to hurriedly destock inventories that had built up to a huge extent when there was no downstream consumption; and it induced a sense of “things can only get better” among market participants.

“The government will keep stimulating infrastructure”, was an oft-heard comment. China’s steel market was so strong that it became a net importer of steel for the first time in a decade over June-August. In fact, sentiment was as bullish as this correspondent can remember in 12 years of looking at this market.

But things changed markedly in early September, as the impact of tighter credit conditions started to bite. Suddenly, it appeared that steel prices had run up too high, and meant those towering steel inventories were no longer so manageable. We expect that China returned to its usual net exporter status in September.

Beijing’s mantra on property is that houses are for living in rather than assets for speculative investment. While there is something of King Canute – the Danish king who thought he could turn back the tide – to this attitude, financing conditions for property developers have been considerably tightened since July.

Housing starts rose 2.4% from a year earlier to 198.9 million sq m in August, according to the National Bureau of Statistics, but are unlikely to grow much beyond this level in coming months.

Rebar prices are feeling the brunt of this tightening, and sentiment started to evaporate in September. Rebar margins in the Beijing market were less than $7/metric ton in the last week of September, after averaging $48/mt in August, S&P Global Platts data shows.

Rebar stocks in key Chinese cities were 50%-80% higher than a year earlier in late September, and they would have climbed higher still over Oct. 1-8 when China was on holiday. As a result, rebar prices look set to remain under pressure over the balance of 2020.

Manufacturing has been a more positive story – in part because global supply chains have started to be repaired, providing more export opportunities. Production and new orders both improved in September, according to manufacturing purchasing managers’ indices published by the NBS and Caixin. 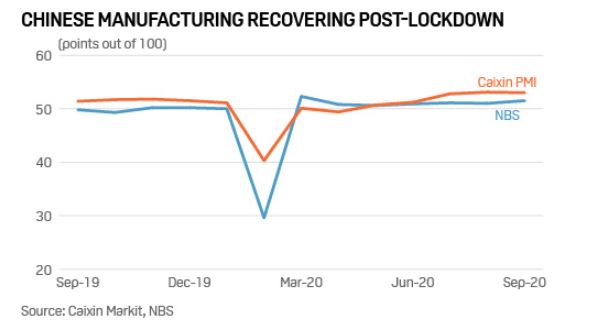 But factory managers reported that steel prices had risen more quickly than their sales prices, noting they may struggle to pass on the higher costs to end customers. This would be a concern for hot-rolled coil prices and margins which rallied strongly from the second-half of July to early September. But they have also slumped. Domestic HRC margins fell to less than $10/mt at the end of September from $55/mt at the start of the month. 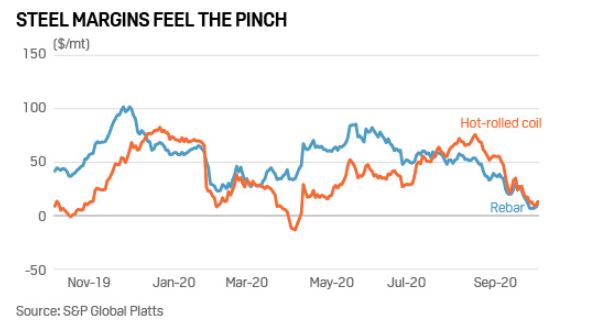 Dust in the wind

Along with falling finished steel prices, robust iron ore prices have contributed to the margin squeeze. They too weakened over H2 September. But this was because many mills had restocked ahead of the Golden Week holiday, while other buyers were understandably wary about purchasing in a tumbling steel market. Companies we spoke to for the Platts Iron Ore & Steel Outlook for Q4 mostly saw prices in the $100-$110/mt range, which would be back to the levels of July. Iron ore exports typically pick up from Australia and Brazil in Q4. 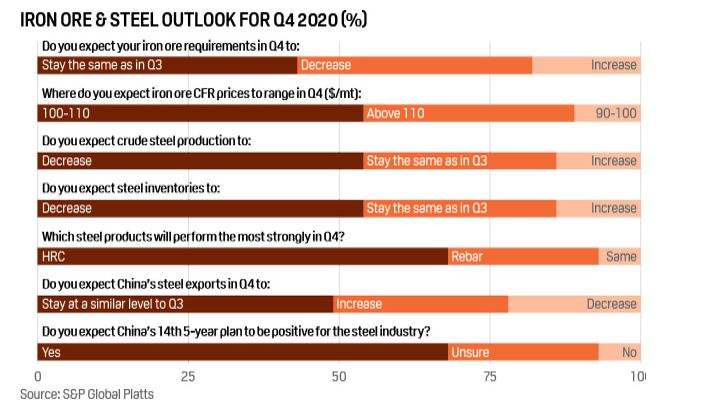 Platts expects China’s crude steel production to finish the year strongly and be up around 4%-5% overall in 2020. Therefore, iron ore prices could well retreat to the levels suggested in the Outlook. But given the Platts 62% Fe benchmark averaged $93/mt CFR China over January-July, this would still represent a very healthy price range for the major iron ore producers. 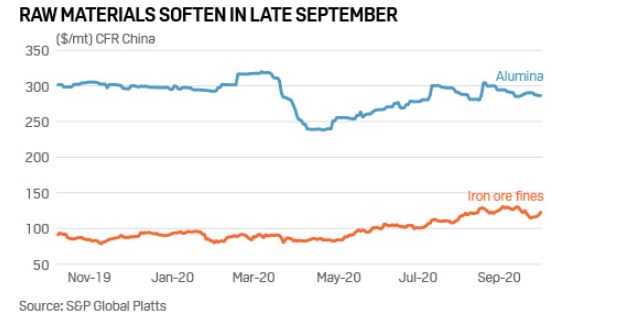 In contrast to iron ore where supply has tightened, there is a lot of alumina production capacity coming online in China that is likely to weigh on domestic prices. This was the view of the Platts China Alumina & Aluminum Outlook for Q4. Some 81% of respondents believed China’s alumina production would rise in the October-December quarter. Though aluminum smelting capacity is being turned on quickly, the nonferrous sector is subject to the same tighter macro conditions.

Down but not out

There are a few wild cards when considering metals markets over the rest of 2020. A La Nina weather event is forecast to hit northern Australia during the rainy season which typically starts in late December (but can come earlier). This could severely curtail coking coal and iron ore exports.

Some policy announcements – supportive of metals demand or otherwise – may come out of China’s plenary meeting in Beijing later this month when the 14h Five-Year Plan (2021-2026) will be discussed. And a certain election in North America could also have an effect on sentiment in China. These factors aside, the next few months are set to be softer in terms of metals demand and prices – but the market won’t fall off a cliff.