Chinese steel production posted a rare drop in October, while domestic steel prices have been buoyed by the property sector. Paul Bartholomew and Sebastian Lewis analyze China’s key economic indicators, and what they mean for the metals sector. 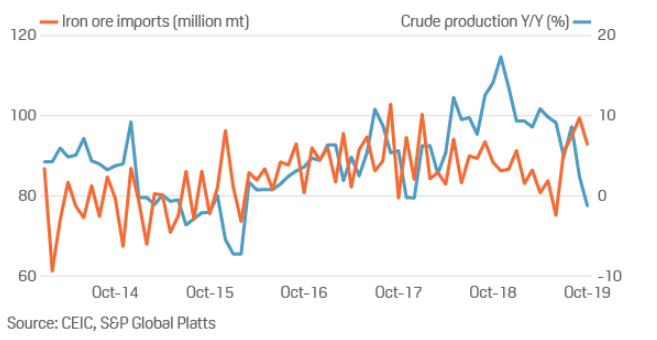 China’s crude steel production fell 1% on year in October, marking the first time output has contracted since the beginning of 2016. The fall was mainly due to production cuts in northern China to “keep the skies blue” over the 70th Anniversary of the People’s Republic of China celebrations and Golden Week holiday in early October. October was the second consecutive month of slowing steel production growth.

S&P Global Platts sees crude steel output growth easing to 2% next year, compared with around 6%-7% in 2019. This year there was a big spike in new steelmaking capacity commissioned, most of which replaced facilities that had long been closed. From 2020, the relationship between capacity removed and new capacity commissioned will be much closer, therefore the year-on-year production increase will be more modest.

Demand from property construction remains robust, supporting steel and iron ore demand for most of 2019. The property sector could see a boost from government bonds issued in early Q1, 2020, in the same way it did at the start of this year. 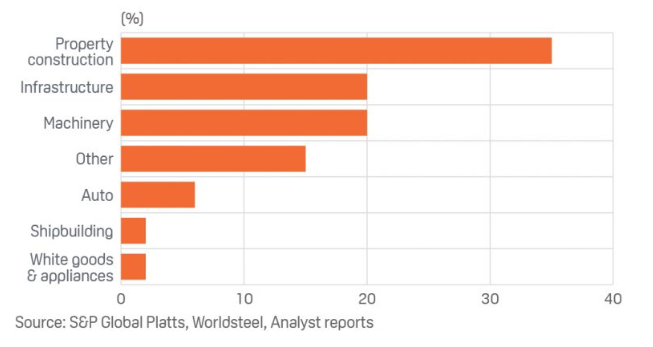 However, weaker house price data in recent months indicates all is not completely well in China’s property market. In fact, some argue that it has overheated and is bound to cool in 2020.

Iron ore imports have been strong since July on recovering seaborne supply but imports fell in October due to cautious mill restocking in anticipation of possible steel production cuts over winter.

China bulls: Domestic rebar prices rose by 80% over the month of November and should be supported by robust property construction data 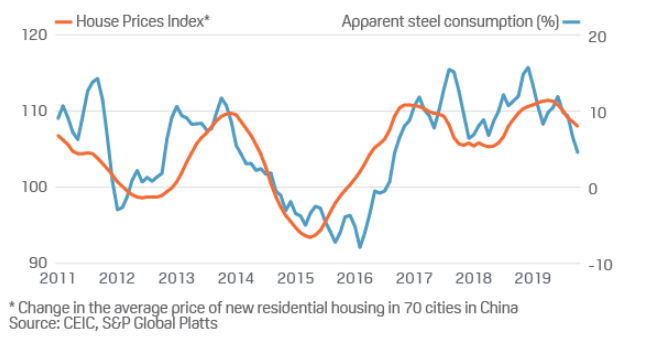 Housing data shows floor space started (which represents floor space in building projects started) in January-October expanded 10% year on year. Growth had been 9% for January-September. Floor space sold is also picking up slightly, moving into positive year on year growth after nine months of contraction. Typically, there is a 6-9 month lag between floor space sold and steel being purchased for the construction project.

But there is reason to be cautious about the outlook for property. Research by S&P Global Ratings argues that regulators are clamping down on the real estate sector, curbing offshore bond issuance by developers and ordering banks and other sources of financing to reduce their exposure to the sector.

S&P Global Ratings attributes some of the recent growth in floor space sold to developers cutting prices in a bid to sell properties and improve cash flow. Beijing has said it does not want to use the property sector for short-term economic stimulus. But the sector remains vital to China’s economy, particularly in view of weak manufacturing – though manufacturing improved in November.

Funding has gone into real estate rather than infrastructure

New home prices fell in 17 of the 70 cities monitored by the National Bureau of Statistics, giving the biggest average month-on-month drop in the house price index for several years.

Infrastructure demand may not compensate for any slowdown in property construction demand. Year-to-date fixed asset investment growth in infrastructure fell back to 4.2% in October, after rising slightly in September. This is despite China’s intention of boosting infrastructure this year. 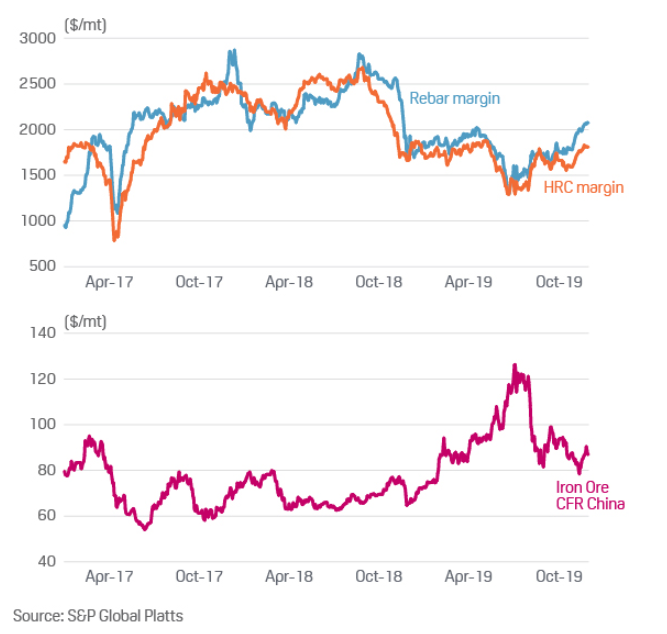 Iron ore imports have been above 90 million mt/month since July due to the recovery in supply from Australia and Brazil. But imports of 92.8 million mt in October were down 7% on September as mills were cautious about restocking in case China announced steel production cuts for the winter period.

Iron ore restocking will likely pick up in coming weeks ahead of the colder winter months and Chinese New Year, and in anticipation of the usual weather-related export curtailments from Australia and Brazil in Q1. This should help support iron ore prices in December.