Unipol Gruppo Finanziario SpA's exposure to the Italian banking sector has made it the worst-performing stock in a sample of top European insurers and reinsurers since the U.K.'s vote to leave the EU roiled markets. The nonlife insurer shed 21.4% by July 13 since the British referendum June 23, whose result only heightened fears of an upcoming vote on constitutional reform in Italy which could potentially topple the center-left government of Matteo Renzi.

Italian bank and insurance stocks like Unipol and Generali – the sixth worst performer, with a 15.32% loss – have suffered more than U.K.-listed companies, which face being cut out of the EU's Single Market.

While the post-Brexit prospect of a prolongation of ultra-low interest rates dims the outlook for life insurers' investments, nonlife insurers have benefit from being able to rely more on underwriting income. But Unipol's exposure to Italy and troubles in its banking unit mean it has suffered regardless.

Concerns over the health of Unipol Banca's loan book, and a spate of bad news from elsewhere in the banking sector, have rattled investors, one Milan-based analyst said. Unipol Banca SpA's nonperforming loans came in at €3.9 billion at the end of the first quarter, almost half loans to customers of €8.7 billion. In April, Fitch said the "extremely weak" credit quality of its banking operations was likely to affect Unipol's capital and profitability.

Unipol Banca, which had a coverage ratio of 44.6% at the end of the first quarter, is aiming to cut NPLs to €3.3 billion by 2018. Otherwise, Unipol Group should easily be able to bail out its bank if losses mount, the Milan-based analyst said, adding however that this could cost as much as hundreds of millions of euros and endanger the group's plan to pay €400 million in dividends over the next three years.

Other analysts have suggested Unipol could sell the bank.

A second analyst, who also spoke on condition of anonymity because he is not allowed to talk to journalists, said the group should be able to manage the NPL problem within its bank and that cutting the dividend would be an "absolute worst-case scenario."

Unipol's reliance on Italian business – it lacks the European diversification of peers like Generali – makes it an especially vulnerable stock to Italy's political crisis, Martina von Terzi, an analyst with HVB-UniCredit, said. Insurance companies have also been caught in the selling of Italian banks that came as the nation's government floated a plan to pump tens of billions of euros into the sector, meeting immediate European resistance. EU officials have reminded Italy that the bloc's law requires bondholders to be bailed in before state aid to banks is permitted. 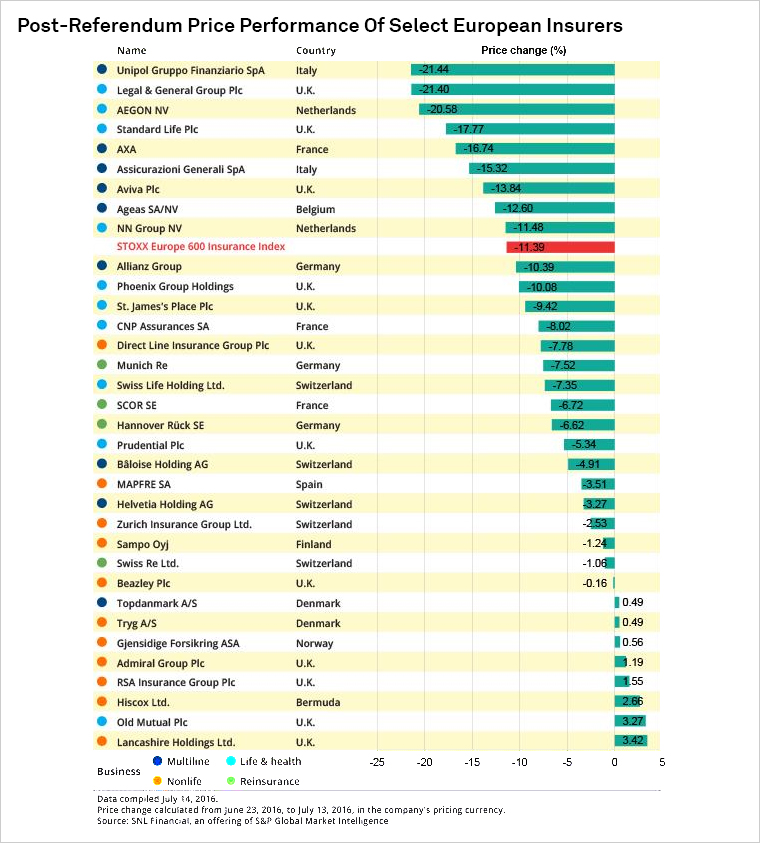 "Banks and insurance debt indices are strongly correlated and thus it's not surprising that the insurance sector in Italy reacted strongly to uncertainty about capital position and bail-in discussions," she wrote in an email.

Reinsurers, with large non-European exposures, have best withstood the market turbulence. Lancashire Holdings Ltd. and Hiscox Ltd., which underwrite risk through Lloyd's of London, saw increases in their share prices, albeit in the context of a declining pound sterling.

Even if the U.K. leaves the EU entirely, the position of the country's large reinsurance industry would be relatively secure, since reinsurers are not dependent on Single Market access to provide reinsurance services to European clients, Aon Benfield said in a July note.

A cheaper pound would also decrease the industry's cost base in foreign currency terms, analysts pointed out.