Amid dark clouds, there are silver linings for oil in Asia: Fuel for Thought


Amid dark clouds, there are silver linings for oil in Asia: Fuel for Thought

There were more questions than answers on oil’s roadmap at the S&P Global Platts virtual Asia Pacific Petroleum Conference, but delegates betting on Asia’s voracious appetite may have found solace in two key messages: China’s demand outlook looks promising and India’s refining expansion is far from over.

The comments from industry leaders at the three-day conference in mid-September will not only send a strong signal about the resilience of consumption in one of world’s biggest oil consumers but are also an indication the push toward energy transition may not necessarily mean the end of refining growth.

OPEC Secretary General Mohammed Barkindo’s comments that oil demand growth in China is currently the only certainty may have come across as music to the ears of oil traders desperate to find a market to pursue for business in an otherwise gloomy environment.

Barkindo said oil consumption in China would rise through the remainder of 2020 and recover completely in 2021, although the rest of Asia would not see a full recovery to pre-crisis levels during 2021. And for India, he noted it would be challenging for oil demand to return to growth before 2021.

The comments echoed views from S&P Global Platts Analytics, which is expecting Asian oil demand to drop by an unprecedented 1.7 million b/d in 2020, down from a positive growth of 680,000 b/d in 2019, posting the first decline since 2008 when it was hit by the global financial crisis.

But on a positive note, Asian oil demand is expected to bounce back in 2021, led by demand recovery in China and India, with growth pegged at 465,000 b/d and 500,000 b/d, respectively, for the two countries.

Barring any second-wave outbreaks, Asia’s oil demand is expected to grow by 1.5 million b/d in 2021 as economic activity resumes. But it will not be a return to business as usual for some sectors, particularly aviation, Platts Analytics added. 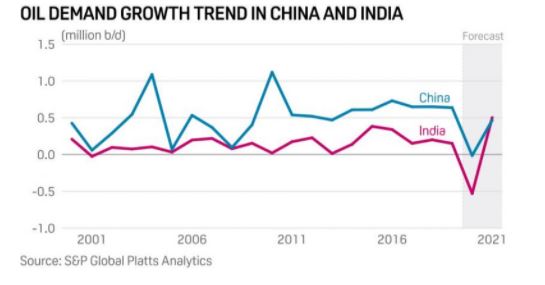 While there were questions on whether oil projects could suffer as Asian countries push toward cleaner fuels, some conference speakers highlighted that the region’s insatiable appetite for energy and the exponential demand growth would create enough space for all fuels to coexist. And that would mean oil demand would still have room for growth in coming years.

Shrikant Madhav Vaidya, chairman of Indian Oil Corp., said with India’s energy consumption being just about one-third of the world average, there would be room for all kind of fuels. The country would still need to expand oil refining capacity, while embracing cleaner fuels like natural gas, hydrogen and renewables.

“It’s not a question of this fuel versus that fuel,” he said. “India will be the growth center for oil in the long run. For IOC refineries, we have planned brownfield expansions. We will also have a couple of grassroots refineries.”

However, refiners pointed out that having a model integrated with petrochemicals is the only way forward. And not just IOC, but even private refiners spoke on similar lines.

Nayara Energy CEO B. Anand told Platts the company plans to expand its petrochemical footprint was progressing well despite COVID-19 creating some challenges.

Nayara’s proposed first phase of asset development for the Vadinar refinery entailed an investment of $850 million for setting up a 450,000 mt/year polypropylene plant and a 200,000 mt/year MTBE plant.

But commenting on short-term challenges, refiners said there was a need to plan very carefully, such as eying optimal crude sourcing as well as selling their products in most profitable markets.

In addition, there is a need to cut operating costs, preserve cash and progress cautiously on capital expenditure, all while ensuring energy efficiency and digitalizing processes wherever possible.

One of the biggest differences in APPEC this year compared with previous years, apart from the fact that it was a virtual conference in 2020, was the intensity at which the energy transition theme was debated as delegates tried to find answers to the key question: How will the clean fuel push impact oil?

With Asia accounting for 40% of the of the world’s oil demand, countries like Japan, China, India and South Korea are aggressively stepping up efforts to embrace clean fuels and reduce dependence on imported oil.

It was evident that the outlook for fuels such as hydrogen have become a lot more positive over the last six to 12 months. While countries like Australia are looking to become key exporters of hydrogen, Singapore and Japan are looking to increase the use of hydrogen in their economies, partly through imports. In addition, South Korea and China are focusing on development and exporting their technology applications.

“For a country like India, hydrogen has unique advantages in terms of higher energy density, flexibility of production pathways, wide range of applications and higher fuel cell efficiencies, making it a promising option to meet the energy demands in the future,” Vaidya said.

And as refiners re-draw their growth strategies, the global bunker industry also does not want to be left behind.

Delegates were of the view the sector’s smooth transition into the low-sulfur era mandated by the International Maritime Organization had offered enough encouragement that it can achieve its next goal of de-carbonization equally free of hurdles.

AET CEO and President Rajalingam Subramaniam told APPEC the pandemic was a “massive reset in the industry,” and noted, “Moving forward, the industry will have to adopt a more collaborative approach to stay relevant.”