The total amount of auto and SUV exports targeted by China in a deepening trade conflict with Washington is 6.5 times higher than that targeted by the U.S., an analysis by S&P Global Market Intelligence shows.

However, China's tariffs on auto imports could ultimately be scaled back. Chinese President Xi Jinping pledged in an April 10 speech to "considerably reduce" auto import tariffs as soon as possible, according to a Reuters report. Xi said he hopes to find greater balance and reduce some of its trade surplus.

Chris Rogers, research director for Panjiva, said he expects autos to be "slapped around" as a result of U.S.-China trade tensions.

Rebecca Lindland, executive analyst for Kelley Blue Book, said in an interview that German automakers Bayerische Motoren Werke AG and Mercedes-Benz, as well as American maker Tesla Inc., would be hit the hardest by the Chinese tariffs because they have "sole sourced production," meaning that certain vehicles can only be obtained from one production facility in the U.S., unlike other major U.S. automakers that have already have a production presence in China.

For instance, Mercedes produces its GLE and GLS SUVs in Tuscaloosa, Ala., while BMW produces its X Series SUVs in Spartanburg, S.C.

"Chinese imports of cars specifically are currently dominated by European Union supplies, which accounted for 53.3% of the total in 2017 after expanding by 14.6%," Rogers said in a Panjiva research note. 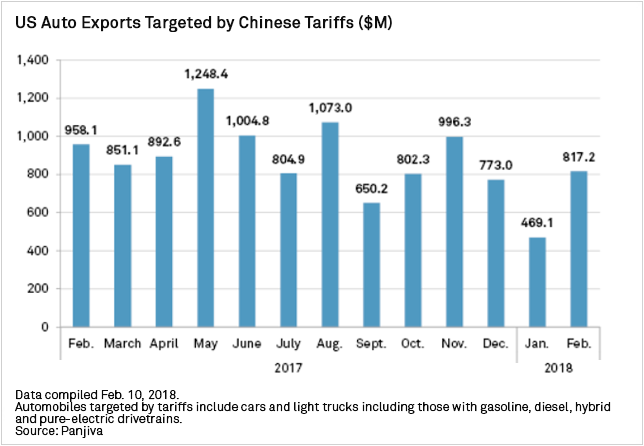 On the other hand, the big American producers — General Motors Co., Ford Motor Co. and Fiat Chrysler Automobiles NV — would not be hit as hard because they do not export heavily to China, Lindland said. Instead, they utilize production facilities in China or operate through joint ventures, leaving much of their vehicle production untouched by Chinese tariffs. "GM and Ford already have production in China, with GM in particular," Lindland said. "So they don't export a lot. The majority of exports that are seen are from Mercedes and BMW." U.S. vehicle exports account for 21.3% of the products that China has threatened to impose tariffs on, according to Panjiva. 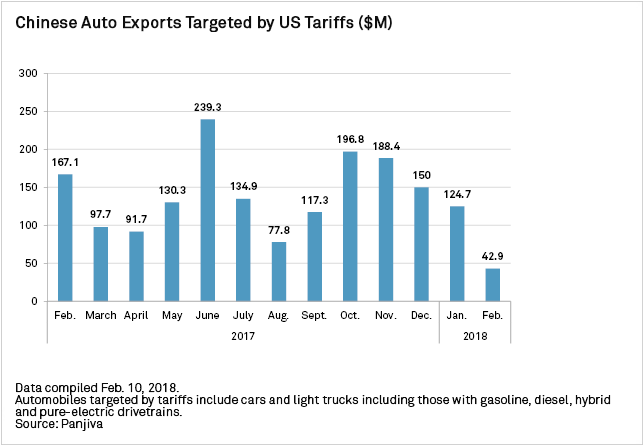 While the tit-for-tat tariffs are looming, creating anxiety and uncertainty for auto manufacturers, the U.S. and China are reportedly continuing to negotiate behind the scenes, leading some trade experts to believe that the two sides will reach agreement to avert the imposition of tariffs. The U.S. has set a public comment period through May 11 for its first proposed $50 billion in Chinese products, which would allow negotiators some time to reach a deal.

In addition, the latest comments by Xi have cast more uncertainty over the tariffs.

Rogers said he believed that the unspecified reduction in tariffs that Xi pledged would apply to the existing 25% tariff rate that China now imposes on U.S. auto imports.

"The measure would act as a simultaneous carrot and stick for trade relations with the U.S.," Rogers said in the research note. "Adding 25% to duties for U.S. imports vs. a cut for others would mean U.S. manufacturers could lose out even more."

However, IHS Markit Asia Pacific Chief Economist Rajiv Biswas said in an April 10 note that Xi's speech has set a "very positive tone" for reducing trade tensions between U.S. and China, including the possibility of having the issue of Chinese forced intellectual property transfer investigated by the U.S. solved at the World Trade Organization.

"If a US-China deal can be struck on intellectual property rights at the WTO, this could pave the way for the U.S. withdrawing its proposed Section 301 tariff measures on China, allowing China to also withdraw its retaliatory tariff countermeasures," Biswas said.

General Motors, Ford and Fiat Chrysler did not return requests for comment.

Chris Hudgins contributed to this article.