One of the anticipated developments in the aftermath of the U.S. presidential election is the prospect that action may be taken to permit the repatriation of foreign cash balances at a reduced levy, whereby major domestic firms would not endure double taxation of profits. While different ways have been floated in the past to allow corporations to return foreign capital home on favorable terms – from a one-time tax holiday to a reduced corporate tax rate for foreign profits - one general question is which sectors could see the biggest gains from the enactment of such a policy. With this in mind, we sought to identify the most highly cash-rich companies among S&P 500 companies, excluding those in financials and real estate, as well as to calculate a potential tax revenue gain.

Whereas not all companies disclose the amount of profits derived from foreign sources, according to the S&P Dow Jones Indices’ S&P 500 Foreign Sales Report, the percentage of S&P 500 companies sales abroad totaled 44.3% in 2015 (the energy sector had the largest exposure for foreign sales with a 57.9% share, followed by information technology with 57.8%). Using that 44.3% figure as a representative figure for the amount of foreign sources for S&P 500 cash holdings, it may be reasonable to infer that foreign-sourced cash balances of non-financial and real estate S&P 500 companies could total $983 billion. As such, a reduction of the current statutory corporate tax rate of 35% to perhaps 17.5% could generate tax revenue of some $172 billion, assuming the repatriation of all foreign cash holdings.

Much of that amount could likely come from the information technology sector as, given our findings based on recent reports, cash balances among S&P 500 IT companies total almost $937 billion, or 42% of the $2.22 trillion held by non-financials and real estate firms. Furthermore, of the top corporate cash holders by individual S&P 500 sector, excluding financials and real estate firms, the nine companies listed below hold $462 billion on their collective balance sheets, which represents almost 21% of the $2.22 trillion held by non-financial and non-real estate S&P 500 companies. For market participants seeking to uncover the name and sector of potential beneficiaries of a revised tax policy benefiting repatriation of foreign heled, the below is a good starting point. 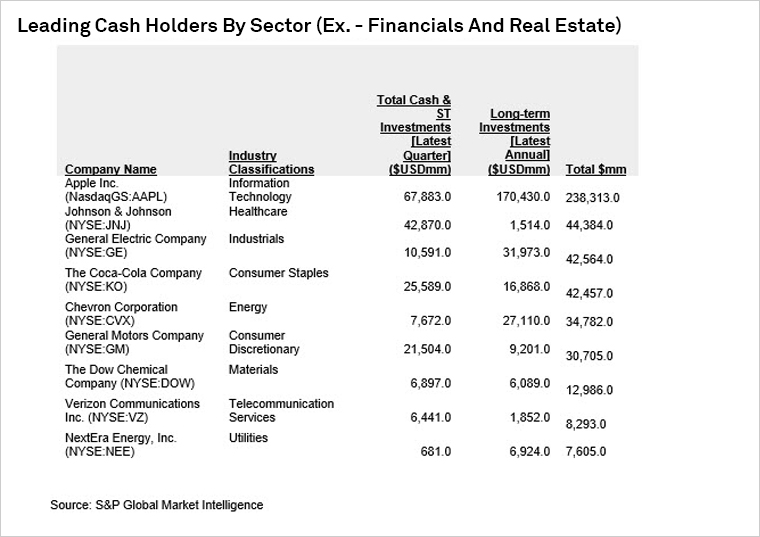