Harvey, the First Major Hurricane to Hit the U.S. in More than a Decade, Is Testing Re/Insurers

Preparing an Insurance Company to Address Risks from Climate Change


Harvey, the First Major Hurricane to Hit the U.S. in More than a Decade, Is Testing Re/Insurers

Hurricane Harvey is the first major hurricane (Category 3 or higher) to make landfall in the U.S. since Hurricane Wilma hit Florida in October 2005. Indeed, on Aug. 25 at 10 p.m. CDT, Harvey hit near Rockport, Texas, as a Category 4 hurricane with maximum winds of 130 mph. It's also the first hurricane to hit Texas since Hurricane Ike (Category 2) in 2008.

It's too early to accurately quantify the insured losses related to Hurricane Harvey. However, based on early estimates from catastrophe-modeling firms, they could total up to $6 billion. At this loss level, primary insurance carriers--as opposed to reinsurers--would retain the majority of losses.

Based on these early estimates, we believe that Hurricane Harvey will likely be an earnings event rather than a capital event for the property/casualty (P/C) insurers and reinsurers. As a result, we don't expect to take many negative ratings actions in these sectors, but there could be ones on a few outliers.

Given Hurricane Harvey's unprecedented precipitation, the ongoing flooding will likely exacerbate the magnitude of the insured losses, which will be mostly covered by the National Flood Insurance Program (NFIP). In addition, we expect the Texas Windstorm Insurance Association (TWIA) to be materially affected.

Primary Insurers Are Set To Absorb The Majority Of Losses

Primary insurers--as opposed to reinsurers--will bear the brunt of the covered losses from Hurricane Harvey. However, the effect on individual companies will vary. While the large, national primary players have sufficient geographic and product diversification to absorb the losses, some of the regional and local players could face significant hits to their earnings and possibly their capital. With the earnings of certain personal lines players already stretched, the hurricane-related losses could wipe out their earnings for the year. Consequently, we could consider taking negative rating actions on certain outliers, specifically those where we believe capital levels might decline beyond our base-case assumptions. Such could be the case for Hochheim Prairie Insurance Group, a small insurer entirely exposed to Texas, for which the likely impact from this event will be greater.

The largest exposures for the sector are through property and auto lines. The brunt of the wind and storm surge damage is in the coastal regions, but as the hurricane progressed inland, the nature of losses transformed to flood driven by incessant rain. Undoubtedly, losses will hit both property and auto lines. However, losses in property lines will be mitigated to a certain extent because flood is an excluded peril under most homeowners policies, and the primary coverage for that peril comes from the NFIP. While it might be easier to claim that structural damage to properties closer to the coast was because of wind and storm surge, as the exposure goes inland, it will be harder to make that case, and most of those losses will likely be attributable to flooding instead.

Unlike homeowners' policies, standard automobile policies include protection from flood losses, leaving auto insurers susceptible to claims from the widespread flooding and storm surge, as experienced during Hurricane Sandy. Prior to that event, the general assumption had been that most automobiles would be moved out of harm's way before a hurricane were to hit, as the landfall can be reasonably forecasted several days in advance. This did not happen in case of Hurricane Sandy. In Harvey's case, the evacuation was limited to highly affected regions, which leads us to believe that auto losses will be high here as well. Most of the Harvey-related flooding is being caused by rain as opposed to storm surge, as was the case in Sandy. As a result, the damage to the vehicle from fresh water could be lower than in the case of Sandy, whereas immersion in salt water is more likely to lead to a total write-off of the damaged vehicles. For insurers that have already been experiencing higher auto losses over the past year or two, these additional losses will just add to their woes.

From a commercial lines perspective, considering the widespread and heavy flooding, insurers will likely be hit with business interruption claims, especially given the impact on Houston, which is the fourth-largest city in the U.S. It is difficult to contemplate what the final tally might be, as the forecast is for continued rain through this week. This will likely keep the water levels high and consequently affect the severity of the losses for this claim type. Further, flood coverage on property is just not limited to NFIP, as insurers do include flood coverage in many commercial property policies and--to a certain extent--high-end homes that might not be fully covered by NFIP.

Prices for the affected region will increase for impacted lines of business as insurers look to recoup the losses over next few years. However, based on initial loss estimates, we don't expect this event to drive up prices nationally.

Reinsurers Are Exposed--But Not To A High Degree

Based on early industry insured loss estimates (up to $6 billion), we expect the primary insurance market to assume more losses than the reinsurance market. In 2017, among other reinsurance coverages, the reinsurance market has provided $1 billion of protection to the NFIP and $2.1 billion to TWIA, which attaches at $2.8 billion (reinsurers cover losses between $2.8 billion and $4.9 billion). We don't expect the potential losses from Harvey to consume reinsurers' catastrophe budget for the year, especially considering the below-average catastrophe losses in the first half.

Pre Harvey, we expected reinsurance pricing to decrease 0%-5% into 2018. We expect any impact on pricing because of Harvey to be limited to affected regions and policies.

The NFIP Is Underwater

With Texas accounting for about 12% of NFIP's policies in force, Harvey is a significant event that will push the NFIP further into the red given the program's already precarious financial state. The program is about $25 billion in debt, and its ability to fund Harvey-related losses comes from 1) its ability to borrow from the Treasury (current borrowing capacity of about $5.8 billion) and 2) a reinsurance program it took out earlier this year, under which it transferred about $1 billion of its flood risk. With the Insurance Information Institute estimating flood losses reaching about $15 billion (NFIP's losses from Hurricanes Sandy and Katrina were $8.3 billion and $16.3 billion, respectively), NFIP would need Congressional approval to cover any shortfall with additional borrowing from the Treasury. This could further provide an impetus to involve private capital to a greater extent for the upcoming reauthorization.

Given current loss estimates, we do not anticipate any of the natural catastrophe bonds we currently rate with per-occurrence triggers to be affected. There are two such natural catastrophe bonds: Residential Reinsurance 2016 Ltd. Series 2016-I Class 13 and Residential Reinsurance 2017 Ltd. Series 2017-I Class 13. Both are rated 'BB- (sf)', cover losses on an annual aggregate basis, and have exposure in Texas and Louisiana. While losses in excess of the franchise deductible ($50 million) are possible, it is too early to determine what the loss attributed to these two bonds will be. Depending on the covered loss amount, we could take a negative rating action.

S&P Global Ratings expects more detailed information about personal and commercial insurance losses to emerge in the days and weeks ahead. We expect losses to be spread among many national and regional carriers as well as their reinsurers. While estimates for total insured losses are still preliminary, we expect economic damages from Harvey will dwarf insured losses. We will continue to monitor Hurricane Harvey's progression and will comment further when more information becomes available. 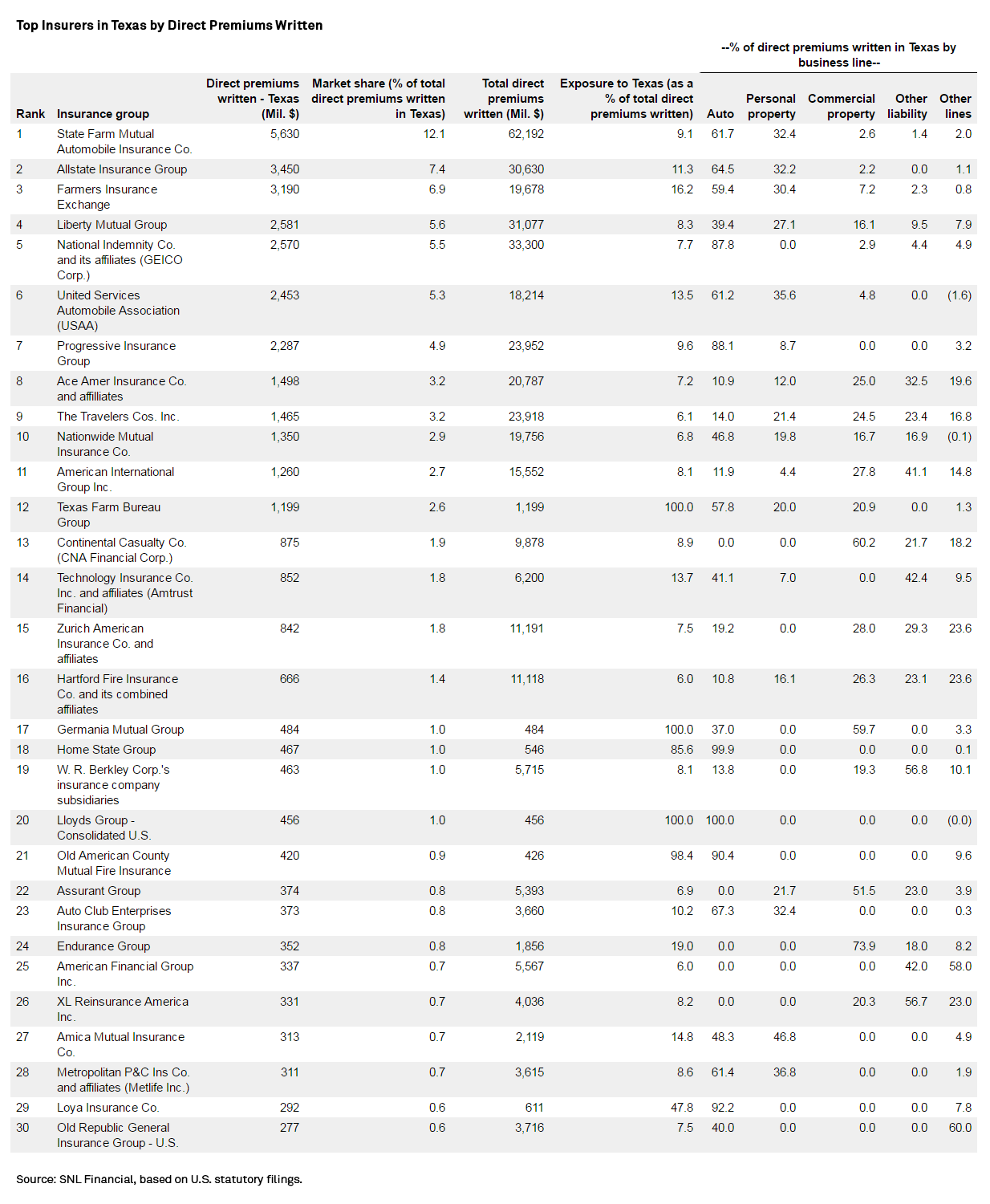