Global Corporate Credit: Despite an Inevitable Credit Correction, Debt Demand Will Swell to $62 Trillion Through 2020


Global Corporate Credit: Despite an Inevitable Credit Correction, Debt Demand Will Swell to $62 Trillion Through 2020

Central banks remain in thrall to the idea that credit-fueled growth is healthy for the global economy. In fact, our research highlights that monetary policy easing has thus far contributed to increased financial risk, with the growth of corporate borrowing far outpacing that of the global economy. This cannot continue indefinitely. An increasing proportion of companies are becoming highly leveraged, raising questions over their long-term debt sustainability, despite low interest rates supporting their ability to meet interest payments. In particular, China's opaque and ballooning corporate debt and the rapid rise of U.S. leveraged finance have developed as key credit risks.

The credit-fueled growth has also subjected investors to an increasingly asymmetric risk-reward environment. Indeed, investors are buying speculative-grade corporate debt, including those from emerging markets, and extending maturities to generate positive yields. As a result, the reward is becoming increasingly unsustainable given the level of risk taken, signaling an inevitable recalibration to a more normalized risk-reward environment.

Our base case anticipates an orderly slowdown of credit growth relative to real growth and inflation, as the latter two factors gradually rise in coming years. However, it is not hard to envisage more negative outcomes where a credit crunch ('Crexit' scenario) occurs, should inflation return, rates rise, and bond prices fall. Alternatively, a worst-case scenario comprising several negative economic and political shocks (such as a potential fallout from Brexit) could unnerve lenders, causing them to pull back from extending credit to higher-risk borrowers.

Four years ago, we expressed our concern that chronic credit rationing could occur should banks globally restructure their balance sheets, and debt and equity investors reassess their risk-return thresholds. This crisis did not materialize as governments instead elected to ensure that credit continued to flow. In fact, the Chinese government pivoted toward this policy, spiking its debt pile to leapfrog the U.S., in line with our prediction in 2013. In addition, capital flowed to riskier sectors in the hunt for yield.

Indeed, the credit build-up has generated two key tail risks for global credit. Debt has piled up in China's opaque and ever-expanding corporate sector and in U.S. leveraged finance. We expect the tail risks in these twin debt booms to persist. That's because globally, governments and central banks appear likely to continue their expansive monetary policies to lift inflation and growth. The Bank of England's statements since the surprise U.K. Brexit result are but the latest confirmation of this bias toward monetary easing. The challenge remains, though: how do governments balance this easing while limiting the accumulation of latent nonperforming debt in the medium to longer term.

Our base-case expectation is for global corporate credit demand (flow) to reach $62 trillion over 2016-2020, with refinancing making up 62% and new debt 38%. These amounts cover all forms of corporate borrowings, including bonds and loans (including intra-group loans for countries where data from the Bank for International Settlements have been used). The $62 trillion is up on our 2015-2019 projection of $57 trillion last year, reflecting China's still-high credit growth, continued expansion in North America, and our expectations of only a modest pick-up in borrowings from the eurozone and U.K.

In addition, we anticipate outstanding corporate debt would expand by half to $75 trillion over the next five years. China's share of global total corporate debt, driven by its economy's fast real growth, would rise to 43% in 2020 from 35% in 2015. We forecast U.S. debt will dip to 22% from 24%, while Europe's (eurozone and U.K.) share will ease to 16% from 20%.

Naturally, there are material differences between regional and country credit growth trends. These variations reflect a country's position in the credit and growth cycles, as well as its appetite to fuel growth with additional debt. In general, a low level of global inflation has a dampening effect on nominal credit growth rates.

On the downside, global corporate credit quality has been weakening over recent years. Based on a sample of about 14,400 nonfinancial corporates (mostly unrated), we estimate that at least two out of five corporates are highly leveraged (our weakest category for financial risk profile on a six-point scale). In addition, we assess that 2% to 5% of unrated and rated corporates may be under stress because of their negative earnings or cash flows. In comparison, the ratio was 1% to 4% five years ago (2010).

Our base-scenario is for an orderly credit correction to occur over several years—a 'slow burn' scenario where weak companies fall over gradually. In fact, this correction started in late 2015, as we saw rising defaults, including among rated issuers. The slow burn scenario is predicated on at least a moderate pick-up in real growth and disinflationary forces being kept at bay. This would be a relatively favorable environment for nominal credit growth.

However, we are now transitioning into a period where investors are increasingly skittish about the high valuations of financial assets. Favorable financing conditions, such as abundant debt funding and low interest rates, have elevated prices for financial assets as investors searched for yield. This creates conditions for greater market volatility over the next few years due to lower secondary-market liquidity, with credit spreads for riskier credits and longer duration assets being most exposed.

The challenge for monetary authorities is in preventing financial-market volatility from infecting the real economy, given that their existing tools are reaching the limit of their effectiveness. A series of major negative surprises, such as a mishandling of the negotiation of the U.K.'s post-Brexit relationship with the E.U., or emerging markets' increasing reliance on capital flows, could trigger a confidence crisis and more financial market volatility. That could easily cause funding conditions to tighten sharply, posing a serious default risk for lower credit-quality companies, and challenge the authorities to provide even more monetary policy support.

Growth In Credit And Leverage Will Continue In The Near Term

China's economic focus on the corporate sector (especially state-owned enterprises) for growth and the sector's heavy reliance on debt financing have ballooned the country's corporate debt. As a result, corporate sector debt has outweighed the country's government and household debt. The unrelenting rise in China's share of new debt demand rides on the rapid development of the emerging market economy, which underpins the country's still-high growth in nominal GDP (see chart 1). 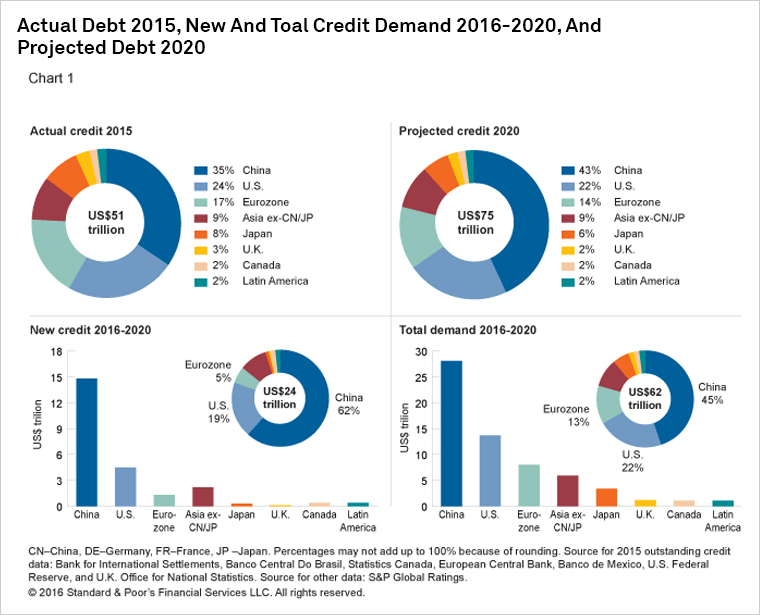 The $62 trillion in total debt demand is larger than our 2015 estimate of $57 trillion outstanding for 2015-2019. As in previous reports, we have taken the somewhat simplified assumption that 75% of outstanding debt will be refinanced over the five-year period. Overall, we project total debt outstanding will reach $75 trillion by end-2020 (see table 1).

In addition, credit intensity is linked to a country's stage in the credit cycle, as well as our views on the headroom available for the country to take on further debt. For instance, given the advanced stage of the credit cycle in the U.S., credit growth remains resilient and the Federal Reserve is starting to tighten even though debt measures have remained fairly stable in recent years.

In China, despite credit measures becoming highly stretched, the authorities remain reliant on debt financing to achieve their economic growth targets. This is reflected in our current credit intensity assumptions of just over two in 2016 that will tail off in an orderly fashion to only 1.3 in 2020 (as the consumer and service sectors are somewhat less capital intensive). However, the downside risks are material, especially if Chinese authorities lose their grip on rebalancing the economy.

We expect the euro area to move from the "adjusting" phase of the credit cycle to the "climbing" stage. However, as domestic demand growth is the main support for recovery, progress is likely to be slow. The recent U.K. referendum vote to leave the E.U. raises the stakes in maintaining the cohesiveness and governability of the E.U. and is a major challenge to further economic and political integration. Already, the ensuing uncertainty has led to a reduction in our real GDP growth forecasts by 0.8% over 2017 and 2018, with a commensurate dampening impact on corporate borrowing.

The political hiatus in the U.K. caused by Brexit means that it will take many months, if not several years, before the nature of their global trading relations becomes clear. In the meantime, the lack of clarity will affect growth, investment, and acquisition activity. This recent development could quickly take the U.K. to the slowing stage of the credit cycle as U.K. corporates become more reluctant to take on further debt. As a result, the credit intensity for the U.K. could remain below one in coming years.

For the global pool in 2016, we assume a credit intensity of 2.0 times (x), a level slightly below the actual level of 2.2x in 2015. For 2017 onward, we presume that credit intensity will steadily decline to reach a low of 1.3x in 2020. This is based on two particular observations: 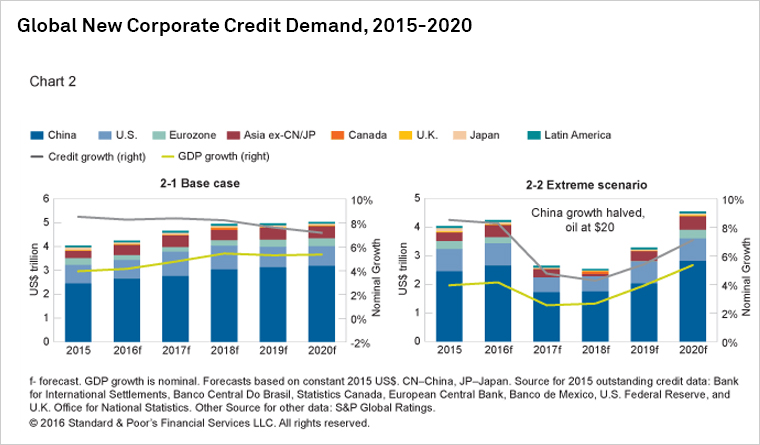 We assume declining credit intensity because we expect investors and lenders will increasingly have to grapple with the weakening quality of borrowers as credit expands further (see the "Two Out Of Five Corporates Is Highly Leveraged" section of this article). Our base-case scenario is for an orderly market correction to occur, through the restructuring and liquidation of distressed borrowers over several years (slow burn scenario).

A worst-case scenario would be a series of major negative surprises sparking a crisis of confidence around the globe. These unforeseen events could quickly destabilize the market, pushing investors and lenders to exit riskier positions ('Crexit' scenario). If mishandled, this could result in credit growth collapsing as it did during the global financial crisis in 2009.

In May this year, we stress-tested a sample of our rated issuers according to an extreme scenario: a halving of China's growth rate and a consequent sharp fall in oil prices and other commodities (see "Stress Scenario Analysis: What Would Happen To Ratings Globally If China's Growth Halved?," May 4, 2016). If we apply the hypothetical GDP growth rates for 2017 to 2019 assumed in the China stress test, and kept all other assumptions for our corporate debt projections unchanged, we arrive at a lower demand for new credit of just $17.3 trillion (28% down from our base case). With the same refinancing of $38.5 trillion, this level of new demand adds up to a total debt demand of $55.8 trillion (11% down from our base case) for 2016 to 2020 (see chart 2).