What is nuclear power’s role in energy transition?

China's rise on the world stage has many dimensions. GDP growth and integration into the global economy have tended to get the lion's share of attention, but there are a host of other issues that also merit attention. One of these is energy. The challenge for China is to avoid consuming an implausibly large amount of oil which, barring a revolution in unconventional production, it will have to import in ever rising quantities as it moves toward advanced country status. In order to achieve this outcome, China will have to follow a radically different energy consumption path compared with the current group of advanced nations.

In this report, S&P Global's China Senior Analyst Group looks at China's rise through the lens of long-term energy demand and sustainability. After documenting China's energy path to date, we look at the government's current policy objectives and construct three scenarios for growth and energy use through 2050. We then assess to what extent these scenarios fit into the global energy picture, particularly as they relate to oil demand (the gas story is similar, but is not the focus of this report).

These paths include: i) the government's energy strategy which envisages a substantial increase in the use of renewable energy; ii) a Japanese style "lost decade" of growth from 2020-2030 where investment falls and a there is a slower transition from fossil fuels and coal towards renewable energy; iii) an energy demand structure for China that follows the fossil fuel-heavy historical pattern of the Organization of Economic Cooperation (OECD) countries. Our results show that the Chinese government's (ambitious) plan does result in a sustainable global oil demand path; China's oil demand is not very sensitive to slower GDP growth; and that China cannot follow the energy-use path of more advanced OECD economies because this would lead to explosive oil demand, blow out China's current account, and put enormous strain on the energy bills of many global trading partners and emerging market peers.

China's energy demand story has evolved rapidly as its appetite has risen sharply along with its GDP, albeit at a more moderate pace. China's share of global primary energy consumption rose from 16.4% in 2005 to 22.9% in 2015. Meanwhile, the U.S. share dropped by 4.2 percentage points to 17.3%, and the share of the rest of the OECD fell about 2 percentage points to 24.6%. In both the OECD and China, energy use grew more slowly than GDP over 2005-2015, suggesting ongoing increases in energy efficiency. 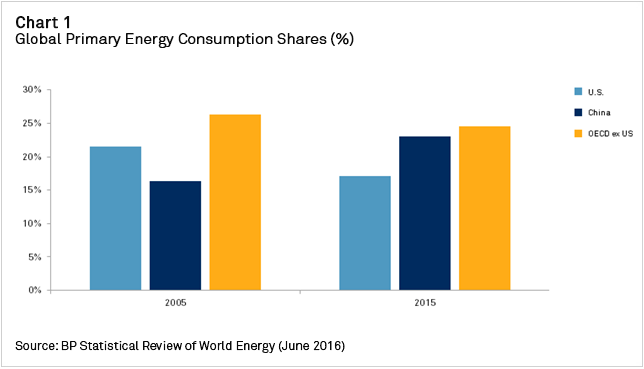 In addition to being the largest marginal consumer of energy, China's primary energy consumption composition is vastly different from the rest of the world and, as we will see below, composition has a huge impact on sustainability. China relies very heavily on coal at the expense of oil and gas (see chart 2 overleaf). A whopping 64% of China's primary energy demand is generated by coal, roughly four times the U.S. and OECD shares. In contrast, China relies on oil and gas to meet only a quarter of its energy needs, far below the nearly 70% share in the gas-guzzling U.S. The global average is 57% for oil and gas and 29% for coal.