Turkey’s NGL production is set to increase after new gas field discovery, but will not be sufficient to greatly reduce dependence on imports

Several large new natural gas discoveries in Turkey will be developed over the coming decade. Though the gas is thought to be relatively dry, production should be large enough to justify recovery of some propane and butane. Turkey currently imports close to 3 million metric tons of LPG per year, so any new domestic production will welcome. IHS Markit does not believe LPG production will be large enough to significantly change Turkey's LPG balance, but it will help to reduce total import demand over the long term.

Total gas production in Turkey averaged about 0.7 BCM between 2000-2020. Nearly all of this gas is associated with crude oil production. This is miniscule compared to the domestic demand which is close to 50 BCM per year. As a result, Turkey imports most of its natural gas from Russia, Azerbaijan and Iran. Turkey has ramped up exploration for oil and gas off its coasts in recent years. Turkey's first national drillship Fatih, owned and operated by the state-owned Turkish Petroleum Corporation (TPAO), discovered 405 BCM of natural gas last year in the in 2020 at the Tuna-1 well located within Sakarya Gas Field, about 170 kilometers off Turkey's Zonguldak coast in Black Sea. This was Turkey's largest discovery ever in its history and the biggest offshore gas discovery worldwide in 2020. Another 135 BCM of gas was discovered at the Amasra-1 offshore well in 2021 bringing the total amount of deposits discovered over the past year to 540 BCM. Turkey plans to begin pumping gas from Sakarya Gas Field in 2024 but must first build the offshore pipeline network and processing facilities. The rate at which gas will be produced is not known at this time.

In addition to the implications for Turkey's natural gas balance, the new gas production could also yield LPG (propane and butane) that would be additive to domestic supply. Turkey produces about 1.0 million metric tons per year of propane and butane from its refineries, but must import the majority of its supply. Crude oil throughput in Turkey's refineries increased substantially in the 2015-2017 period, resulting in growing LPG production. In 2020, domestic LPG production was 0.97 million metric tons, and total demand was 3.87 million metric tons, so Turkey imported 2.9 million metric tons. LPG imports used to come mainly from the CIS. As supply via the Black Sea has declined, Turkey now gets most of its LPG via waterborne cargoes from Algeria, the United States, Kazakhstan and occasionally the North Sea (see Figure 1).

Turkey has several import terminals with the capability to receive VLGCs, including at Izmir, Dortyol, and Yarimca. This has proven valuable in recent years as Turkish importers have been able to take advantage of low VLGC freight and low prices at the US Gulf Coast to access US propane at good prices (sometimes enjoying a discount to the delivered cost of propane from Algeria). 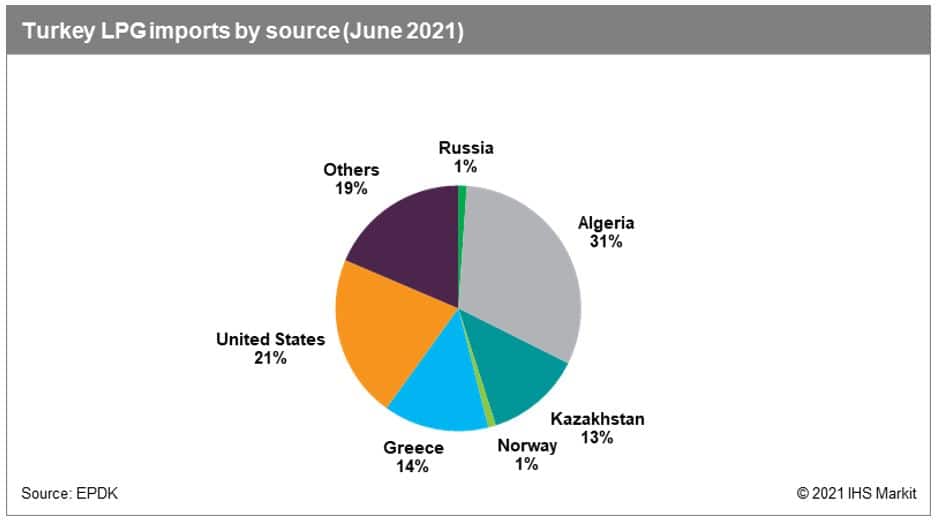 The only existing gas processing plant in Turkey is a small 15 MMSCFD Poyraz Ridge Processing Facility, owned and operated by Marsa Turkey BV, a subsidiary of Condor Petroleum. It processes gas production from Poyraz Gas Field in Gallipoli peninsula which lies within the gas-producing Thrace Basin in Northwest Turkey. The sales gas is then transported through the 36" Inter Turkey-Greece-Italy (ITGI) export pipeline. The gas plant produces only natural gas and condensate.

Turkey does not currently produce any natural gas liquids (NGLs) from gas processing. We estimate that new gas processing facilities, with capacities approximately 1,500 MMcfd in 2024 and 1,000 MMcfd in 2030 will be needed to process natural gas production from Sakarya Gas field beginning in 2024, see Figure 2. The gas quality from Sakarya Gas Field is not known at this time but is described as dry gas. Even moderately dry gas is likely to contain NGLs in economically recoverable quantities, but it is most likely that new supplies will only slightly reduce LPG imports. 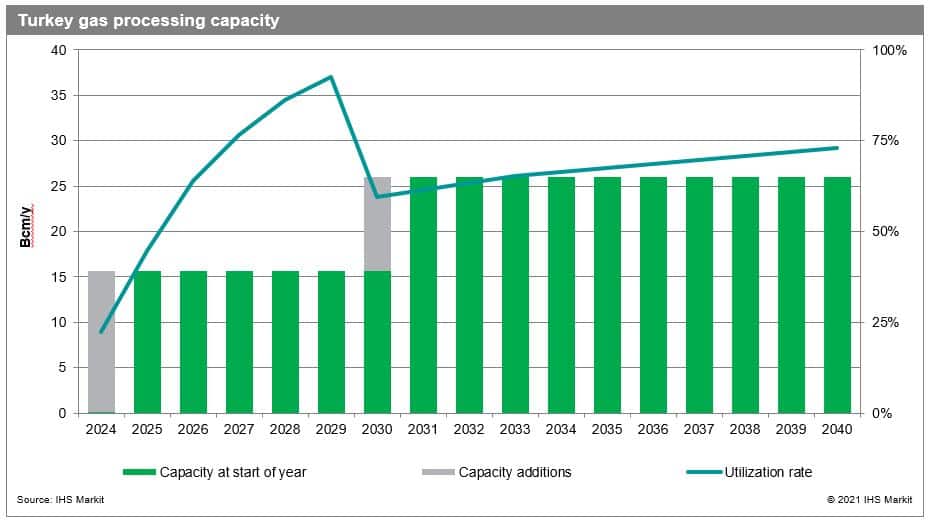 The Turkish government is keen to reduce reliance on imported energy, and increasing natural gas production is a welcome development that will be afforded policy support. Since Turkey is also heavily reliant on imported LPG to supply its large Autogas market, any opportunity to recover propane and butane from domestic natural gas and reduce the need for imports will also be prioritized, even if the net impact is small. For this reason, even if gas quality is such that NGL recovery is not technically required to meet pipeline specifications, we believe that NGL recovery is likely to be added to any new gas processing plants where NGLs can be recovered in great enough quantity to provide an adequate return on investment. No specific policy support for this has been announced, but it is possible that the government will provide preferential financing or other incentives to limit the investment risk.