Based on crude oil monthly data provided by IHS Markit Global Trade Atlas, after May 2019, when Iranian crude oil was supposed to be completely prohibited from imports, it was still imported by two countries: mainland China (regularly) and the Netherlands. Therefore, despite the sanctions imposed on the imports from Iran being in force, we expect the Chinese imports to be maintained in 2020 and beyond. 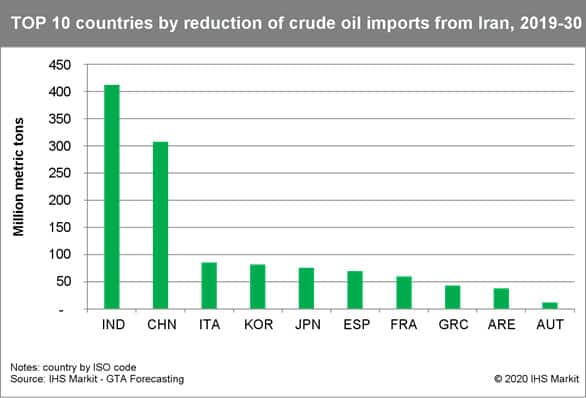 China (mainland) and India are the countries that have the most reduced crude oil imports from Iran compared with the no-sanctions scenario.

If the sanctions remain in force — the escalation of the US-Iran conflict at the beginning of the year indicates this — the total loss of revenues from Iran's crude oil sales will be about $613.1 billion*, which corresponds to a total fall in volume by 1.210 million metric tons (down 2.0 MMb/d on average) over the period 2019-30.

We further observe some crude oil trade rerouting from Iran to other countries. Due to the existing trade relationships, we expect the largest beneficiaries to be those countries that have increased supply of crude oil to Iran's trade partners after the sanctions were imposed. Based on the monthly IHS Markit Global Trade Atlas data, we estimate the compensation factor (balancing imports from Iran with crude oil supplies from other countries) was, on average, 12.2% in terms of volume in 2019 for Iran's trade partners. 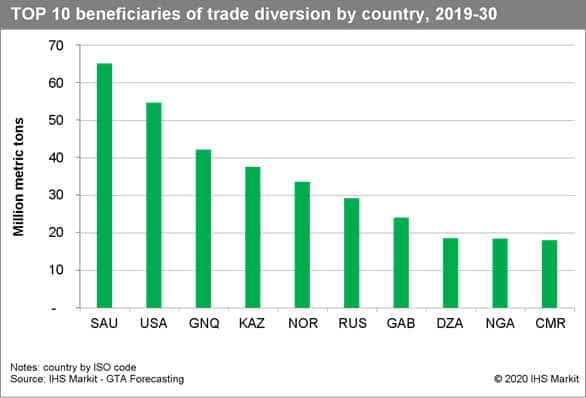 Saudi Arabia and the United States can benefit the most from the trade re-allocation. These two countries are predicted to be responsible for one-fourth (with a share of 24.9%) of the total crude oil imports compensation from Iran in volume terms through 2030. 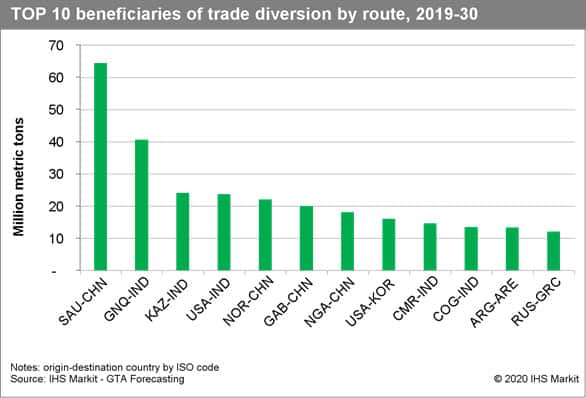 The United States sanctions recently imposed on Iranian crude oil exports were introduced in two waves. The first wave in November 2018, when imports of oil from Iran were banned, with some temporary exemptions granted to countries such as China, India, Italy, Greece, Japan, South Korea, Taiwan, and Turkey, to ensure a well-supplied oil market. The second wave in May 2019, when the sanctions against Iran were tightened and the ban on Iranian crude oil imports was introduced for all countries without any exemptions.

The forecasts do not take into account the impact of the problems in negotiations with OPEC, the coronavirus disease 2019 (COVID-19) effect on the world economy, as well as the upcoming presidential elections in the United States in late 2020.