Taiwan was just hit by a widespread power outage on 13 May. Two coal-fired power units and two gas-fired power units of the Hsinta power plant in Kaohsiung City tripped unanticipatedly owing to a bus bar failure at the nearby Lubei extra high-voltage substation at 2:37 pm that day, leading to an instant supply loss of nearly 2 GW. The outage spread to the rest of Hsinta's operating units, and the whole power plant was unloaded in a short time. Rolling blackouts among different counties were implemented from 3:00 pm owing to lack of backups.

First of all, there was insufficient reserve capacity to deal with unexpected situations. On the demand side, Taipower underestimated the daily peak load by 4.9%. According to Taipower's website, the power load peaked at 36.7 GW about 40 minutes before the "513" outage, demanding the system to hold at least 40.4 GW of firm capacity to keep a 10% reserve margin.

On the supply side, however, the output of renewables was curtailed substantially caused by extreme weather. Dispatchable units (excluding conventional hydro) could provide 34.5 GW of firm capacity based on that day's unit schedule, indicating conventional hydro, solar, and wind power plants have to achieve 85.4% output on average to meet the required 40.4 GW. Unfortunately, the actual supply of renewables was only approximately half of the expectation.

IHS Markit estimates the actual peak time reserve capacity on 13 May was less than 850 MW, leaving the system running with a dangerously low reserve margin of only 2.3%. As the rush hour passed, the reserve margin recovered to about 5.8% right before the accident, with system reserve capacity slightly over 2 GW—not enough to deal with large-scale outage emergencies, like in the Hsinta power plant case.

In addition, heavy reliance on large-scale concentrated power plants weakened grid reliability. From a planning perspective, power supply in Taiwan is not as diversified as in other markets. In other words, there are a few large power plants serving too big of a portion of grid demand, which implies potential reliability issues. The top eight largest thermal power plants serve more than 75% of the system peak (see Table 1). The loss of any of these plants will cause a significant supply shortage; even if the planned reserve margin may have seemed adequate at that time.

For more information on our power research in Asia Pacific, visit our site for our Asia Pacific Regional Integrated Energy service. 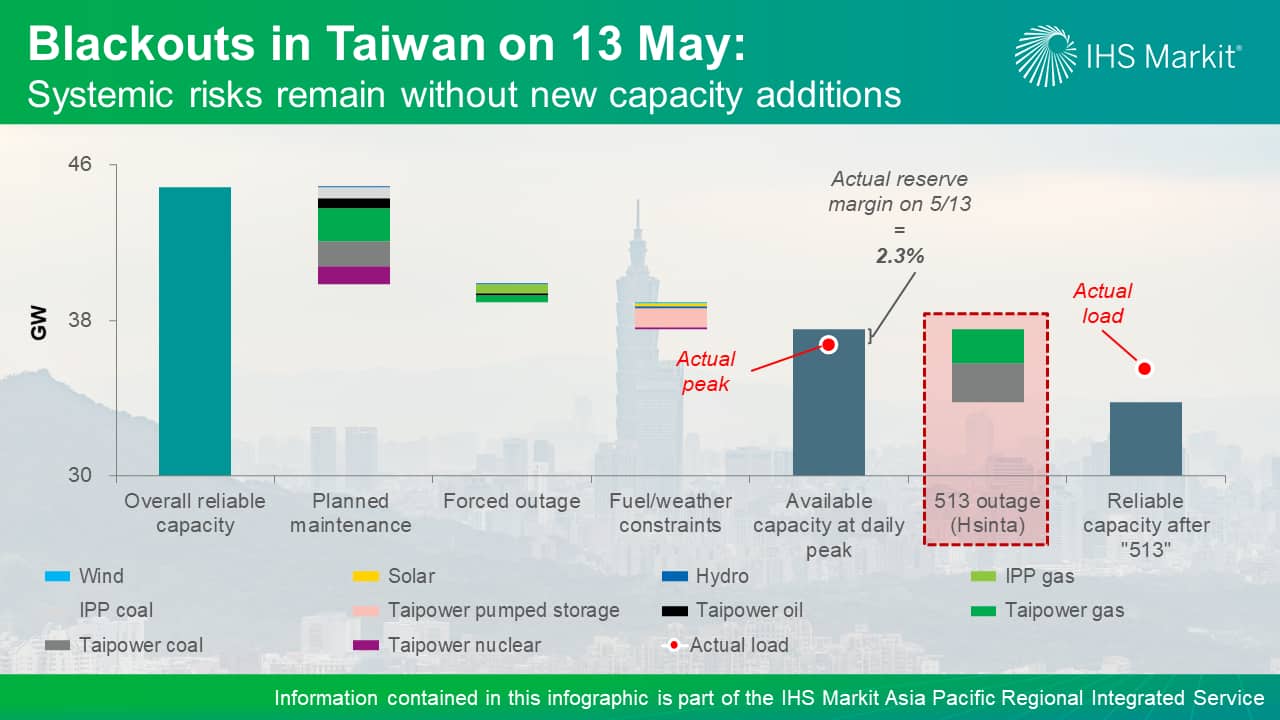 Allen Wang, Ph.D. is a director on the Climate and Sustainability team at IHS Markit, leads Southeast Asia power and renewables research, and is the research manager for Asia Power and Renewables Analytics.

Shan Xue is a Principal Analyst on the Climate and Sustainability team at IHS Markit and focuses on Asian power market modeling.