Potential impacts to regional propane production in eastern Canada and the Upper Midwest and Northeast parts of the United States could be substantial with Line 5 shutdown. Residential and commercial demand in these areas would need to be supplied by other, more physically distant sources, increasing the cost of propane to consumers along with the potential for logistical challenges to overcome in high demand periods. Even with Line 5 operational, the Michigan governor issued an energy state of emergency this past February to ensure adequate propane distribution.

The Michigan Propane Gas Association has estimated that in Michigan alone, 45,000 more trucks or 15,000 more railcars would be needed to replace Line 5 shipments. This amount equates to 123 more trucks or 41 incremental railcars per day, which could raise safety concerns in certain communities.

Propane delivery is crucial to the supply requirements in Michigan, with an average demand of approximately 9.5 million barrels per year. Total consumption of propane is greater in Michigan than in all but five other states, and Michigan has the largest residential sector propane consumption in the nation.

On 13 November 2020, Michigan's governor filed legal action to force the closure of the Enbridge Line 5 pipeline. This legal action could result in the stoppage of oil and NGLs by 12 May 2021. However, on 25 November 2020, Enbridge filed a complaint, seeking an injunction in Federal court to prevent the shutdown of the pipeline, stating that pipeline regulation is a federal and not a state matter. The two parties started mediation talks on April 16, 2021. 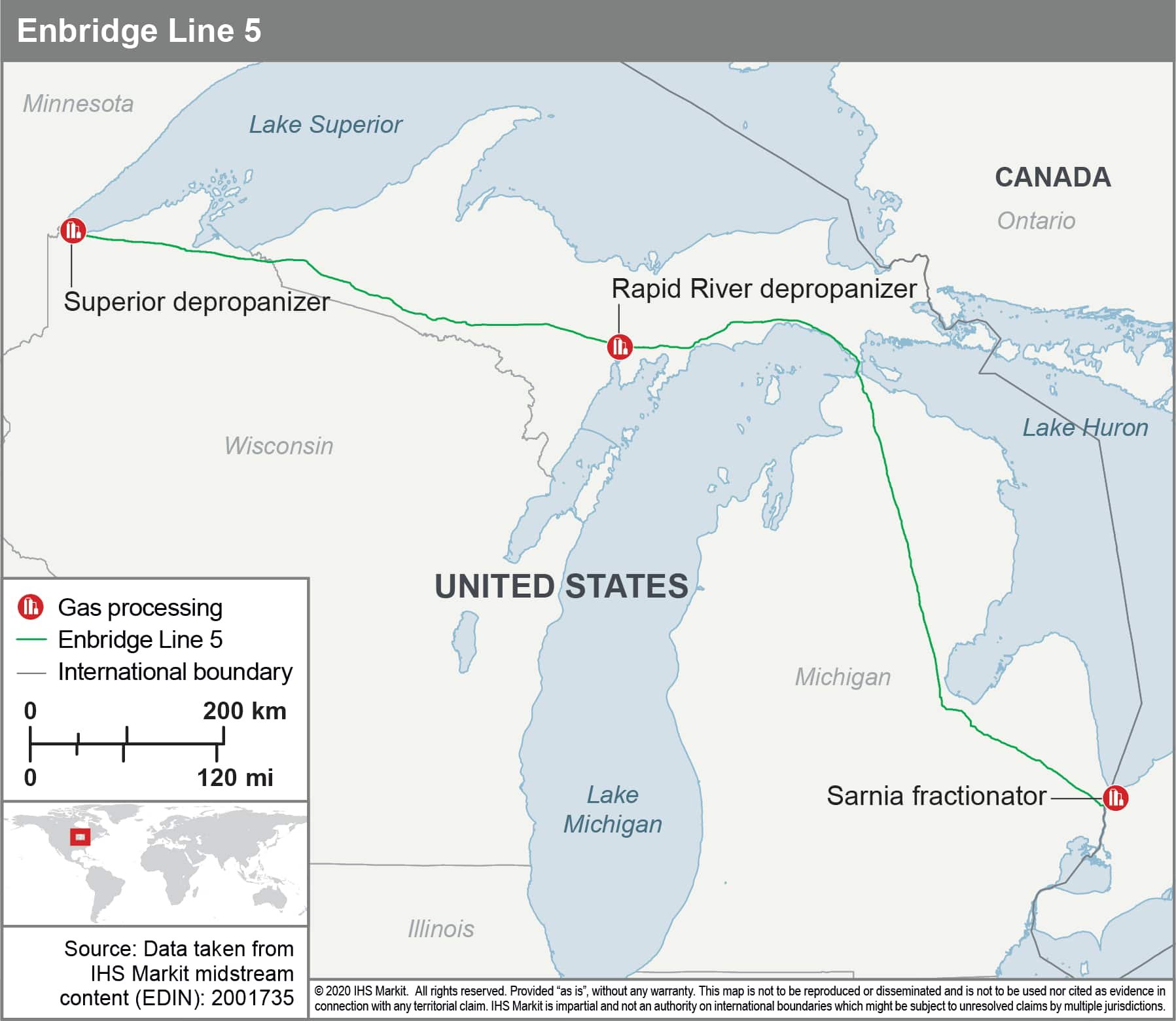 Aside from severe impacts on propane supply to Michigan, Ontario, Quebec, and other Northeast regions, a shutdown of the line would impact the fractionation of the NGL mix currently done in Sarnia, Ontario, and require this mix from western Canada to be fractionated either locally or elsewhere.

Logistical issues in providing enough propane by rail from western Canada to service these eastern markets could become a real concern and potentially impact consumer prices in these markets.

Line 5 delivers approximately 75,000-85,000 b/d of mixed NGLs from oil and gas production in western Canada to depropanizers at Superior, Wisconsin, and Rapid River, Michigan, as well as the Sarnia fractionator in Sarnia, Ontario. The Sarnia fractionator also supplies substantial amounts of propane into Michigan and the US Northeast along with the Canadian provinces Ontario and Quebec and the Maritimes region of Canada.

Many other Great Lakes states rely on propane that is delivered via Line 5 to either the Sarnia fractionation facility or to Superior and Rapid River, along with many Canadian provinces, including Ontario and Quebec.

If not Line 5, how will the product be delivered?

In the event of a shutdown of Line 5, the northeastern United States and eastern Canada will be left with only rail and truck options to supply the fuel needed, although the costs would be considerably more for consumers. Truck options are limited owing to the logical distance and relatively smaller volumes that trucks can carry versus railcars. Propane by rail is normally delivered to terminals that reduce large parcels of LPG into smaller portions that can be delivered to other terminals, to retailers, or to end users via truck.

As the mediation process continues, outcome remains uncertain. However, with the deadline of May 12th looming, it may be a very interesting rest of the year for the NGL market.

Access IHS Markit's full report, The clock is ticking toward a 12 May deadline for Enbridge's Line 5, via the link on the right side of this page.

Understand the implications to US and Canadian Midstream and NGL markets of the potential shutdown of the Line 5 pipeline.
Download Report
Subscribe to RSS Feed