Pork prices are rising in China just as new Covid-19 measures threaten to disrupt the flow of imports from some key suppliers.

Wholesale prices have risen for six consecutive weeks and now stand at their highest levels since early April.

Figures from the Commerce Ministry show wholesale prices reaching CNY46.3 per kg in the first week of July - up 4% on the previous week. Prices have now risen by more than 20% since the middle of May.

Agriculture Ministry figures, which are collated slightly differently, show prices hitting CNY47.37 per kg last week - a rise of 7% on the previous week and almost double the amount at this time last year.

Chinese pork prices surged to record levels in 2019 as the spread of African Swine Fever (ASF) wiped out tens of millions of pigs. Quotes began to ease earlier this year amid optimism that the hog herd would steadily recover. But farmers are now reported to holding out for higher prices as it becomes clear that supplies still fall well short of demand.

Beijing is this week releasing a further 20,000 tonnes of frozen pork from state reserves in a bid to dampen down food price inflation.

China has also been importing record volumes of pork to fill gaps in domestic supplies. Pigmeat imports (excluding offal) in the first five months of 2020 stood at 1.683 million tonnes, a rise of 156% on the same period last year.

Developments over the past two weeks have raised doubts over future trade flows however as China has suspended purchases from several overseas plants due to concerns over Covid-19. Beijing has tested thousands of imported meat consignments to see if they show any trace of the disease. All these tests have so far come back negative.

With farmers and large-scale producers taking a bullish view of future price prospects, many are opting to hold on to their animals - putting upward pressure on prices for live pigs.

The average price of live pigs nationwide stood at CNY34.56 per kg in the first week of July - up 3.6% from the previous week and 106.1% up from the same period last year. 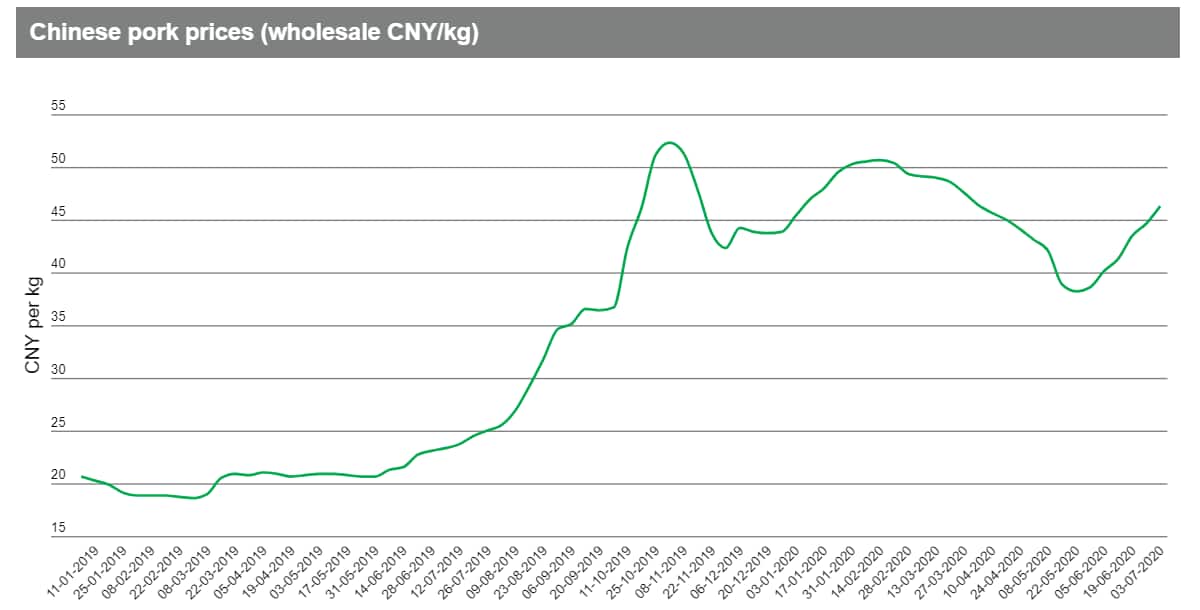