OSV Recovery Update: Americas, in the thick of it

Where is the recovery in offshore drilling activity? The bulls will tell you it's just around the corner, but it has so far failed to materialize for offshore supply vessel (OSV) companies in the Americas. If we step back and look at the Western Hemisphere as one big market, then the Americas OSV market has remained largely flat since October 2018 when the market hit a low of 85 contracted rigs across both continents. Since then it's been hovering at 88 contracted mobile rigs (semisubmersibles, drillships and jackups), supported by 397 offshore supply vessels (PSV, AHTS and AHT). While production facilities require long term support, drilling activity drives new OSV demand, and rig utilization remains poor. Operators have been enjoying a prolonged period of lower costs for vessels and rigs.

Even though immediate platform supply vessel (PSV) availability for vessels has tightened, raising spot market rates in the US Gulf, new term charters have remained between USD 15,000-22,000/day due to an oversupply of tonnage. Given enough advanced notice, there are plenty of vessels available for long term charters throughout the Americas. Dayrates have improved significantly from the lows seen in 2017 when rates were at or below operating costs. The two big drivers of the Americas have historically been the US Gulf and Brazil, both of which have lacked a critical mass of offshore projects to substantially raise OSV dayrates into profitable territory. Instead minor rate increases have been pushed by a tightening of immediate availability in regional supplies.

Offshore activity in the US Gulf has failed to recover sufficiently to absorb the oversupply of PSVs. While OSV demand in the US Gulf is up from a year ago, overall drilling activity has been largely flat since January 2019 forcing OSV owners to market vessels into Latin America and even further abroad to West Africa. Places like Canada and Trinidad have proven be stable OSV markets; and much of the new action is in Guyana and Mexico.

Equinor is schedule to begin a three-month campaign with drillship Pacific Khamsim in November 2019. BP is expected to begin a one-year term with drillship Ocean BlackHornet in January 2020. Deepwater rig demand has been flat all year, but it could fall as rigs roll off contract. In early July three drillships are expected to come off charter for Anadarko, Talos Energy and W&T Offshore.

Shallow water vessel demand dipped by five term charters with the conclusion of one jackup program in April. Cantium Energy have a two month pause on jackup Enterprise 205, which is expected to resume its contract in August 2019. Term charters for PSVs less than 3,999 dwt fell from 62 to 57 in June. The supply of available vessels on the spot market tightened up a little, keeping rates firm.

We have over 370 OSVs laid up all over North and South America, but stacked vessels are most concentrated in the US Gulf (230), South America (84) and Mexico (51) and Central America (12). The types vessels laid up is also highly varies. While the majority are (130) small PSVs less than 1,999 dwt; all types PSVs and AHTS are in the weeds. Some of them might never work again, but the newer ones can be activated for the right dayrate and length of charter. The PSVs greater than 4,000 dwt are mostly laid up in the USA (27) and Brazil (18). 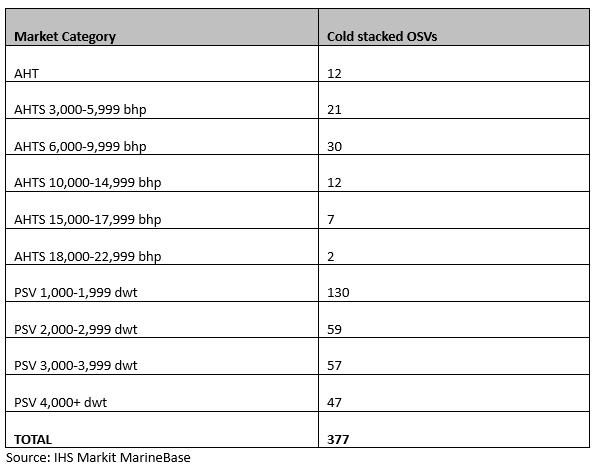 Until recently, Brazilian OSV demand had been steadily trending downward for years, dumping more tonnage onto the international markets. When vessels complete a job in Brazil they tend to go home. OSV demand stopped falling and utilization has improved a little as Petrobras began a number of new term charters and supply of vessels in Brazil fell. Petrobras is scheduled to take on two drillships for long term charters starting in November 2019, which may be accompanied by a swell in PSV demand. While there is potential for a Brazilian surge in OSV and rig demand later in 2019, the trend for much of the year has been negative.

Contracts and Tenders in Mexico

A total of six jackups are scheduled to commence long-term contracts in July with Pemex, along with contract extensions for the supply fleet supporting Pemex. The Mexican oil operator has launched new vessel requirements and is seeking three AHTS vessels. The first AHTS tender has a contract period of 516 days set to commence on 4 August 2019. The second and third AHTS tender has a contract period of 336 and 731 days, respectively, scheduled to begin on 1 December 2019. The contracts are expected to be fixed in late-July.

Looking at the short-term, Chevron and Shell are continuing to plan for their first well offshore Mexico. Chevron has begun rig sourcing for its exploration programme which could start in late 2019 or early 2020, likely in the deepwater Perdido Fold Belt. Meanwhile, Shell has issued a tender for an ultra-deepwater floater to be used for about three wells plus options in 2020. The oil operator recently indicated it had enough work in Mexican water to support one to two drilling rigs for an extended period. Additionally, Transocean has indicated that Shell will be taking drillship Deepwater Thalassa for a two-well programme in Mexican waters from the US Gulf in late 2019 or early 2020. Following its yard stay, drillship Deepwater Invictus will return the rig to Mexico for BHP to drill in the Trion field. Repsol launched vessel tenders in late-May for its two-well programme scheduled for 2020 with the Maersk Viking.

By the end of June, the supply vessel market offshore Eastern Canada was showing a strong term utilization of 91%; led by demand from ExxonMobil, Husky, Suncor, and Encana. CNOOC International is set to move drillship Stena IceMAX to the region in the second quarter of 2020 for a drilling programme with an estimated duration of four to eight months. Nexen Energy, on behalf of CNOOC, seeks to charter up to three OSVs, being a combination of AHTS vessels and PSVs, for the project in the Flemish Pass. Norway's Kvaerner is also seeking to contract anchor handling towing vessels (bollard pull 130 and 170 tonnes) to support Kvaerner operations during the de-installation and transport of Encana's Deep Panuke production platform offshore Nova Scotia.

Guyana on the Rise

Guyana is on track to continue growing its demand for rigs and vessels. The region currently has four contracted drillships supported by 19 supply vessels. Staasolie also has a jackup drilling in Surinam. Increased OSV competition in Guyana did pushed rates down slightly in the second quarter. While Edison Chouest Offshore remains the dominant OSV provider in Guyana, DOF, Harvey Gulf International Marine, Swire Pacific, Tidewater and UOS have all captured a piece of the pie.

Drillship Stena Forth arrived in Guyana in late-June for a two-well programme with Tullow Oil, supported by Swire Pacific and Harvey Gulf. The Liza Phase 1 development operations are expected to run through the end of the year in preparation for first oil by early 2020. FPSO Liza Destiny is scheduled to set sail from Singapore in July and arrive in Guyanese water by mid-September. Market sources have indicated bidding for AHTS work for ExxonMobil's Guyana work is currently taking place.

Currently, I'm generally pessimistic about the offshore demand outlook in the Americas. The North American shale is sopping up much of the new E&P investment in the Americas. Offshore exploration has picked up, but many of the drilling programs are very short, often for 1-3 wells. Before 2014 we were seeing rig contractors negotiate multi-year contracts; the oil companies had to compete to get the best rigs.

Oversupply of rigs and vessels remains a major problem for the contractors. The OSV companies are even fighting over international charters, driving dayrates slightly down in frontier markets like Guyana. I suspect more OSV management teams need to be absorbed/acquired to give the remaining players the pricing power to get back to profitability. Some vessel owners are continuing to fix term charters at just over OPEX costs, which fail to cover capital costs. Rigs rate have improved, but they are still not sustainable either; rigs and vessels can be bought at about half of their replacement value. The fight for survival is not over, we are still in the thick of it.