Pemex CEO Octavio Romero Oropeza reportedly said output from 125 wells in the shallow water complex located in the Campeche Sound in the Gulf of Mexico is now suspended for a few days due to the fire on the E-Ku-A2 platform at one of the compression and power generation units.

About 421,000 b/d of production was immediately impacted, with the company expected to resume output at some of these 100 odd wells in the coming days. The death toll from the incident stands at five. The incident will add to Pemex's woes as it struggles to raise production from the country's major fields. The KMZ complex comprises over 200 producing wells.

Output from the project last year averaged 785,000 b/d, according to Pemex data. Based on Mexico's total crude output of 1.7 million b/d in June, the KMZ project accounts for over 40% of production. Pemex exports some flagship Maya crude grade from the Cayo Arcas Terminal in Confidential. Campeche, where the KMZ complex is served by the FPSO Yuum K'ak' Naab. Maya is a heavy sour grade with API of 21.5 degrees and sulfur level of more than 3%.

Mexico's seaborne crude exports averaged 1.03 million b/d over the first seven months of this year, a decline of 9.2% year on year, data from IHS Markit Commodities at Sea shows. So far in August, crude seaborne exports from Mexico have averaged 1.12 million b/d, down from 1.19 million b/d in July. About 72%, or 800,000 b/d, of August volumes comprise Maya crude.

In July, Maya exports through various load ports totaled 834,900 b/d. There have so far been 25 Maya cargoes loaded in August, versus 41 cargoes in July. Of these, nine cargoes have loaded from Cayo Arcas so far this month, versus 14 cargoes in July, comprising five VLCCs, seven Aframaxes and two Suezmaxes, according to Commodities at Sea.

Roughly half of Maya volumes are typically exported to the U.S. Gulf Coast (PADD 3), and the rest to other global refining hubs. KMZ output peaked in 2013 at over 850,000 b/d and the group of fields is in decline. The government had highlighted a raft of new projects to boost output in the coming years.

Pemex has however been criticized for not investing enough in upstream exploration to find new reserves at existing projects. Mexico has cut its targeted output for the medium term to 1.75 million b/d until end 2022, instead of an initial two million b/d. 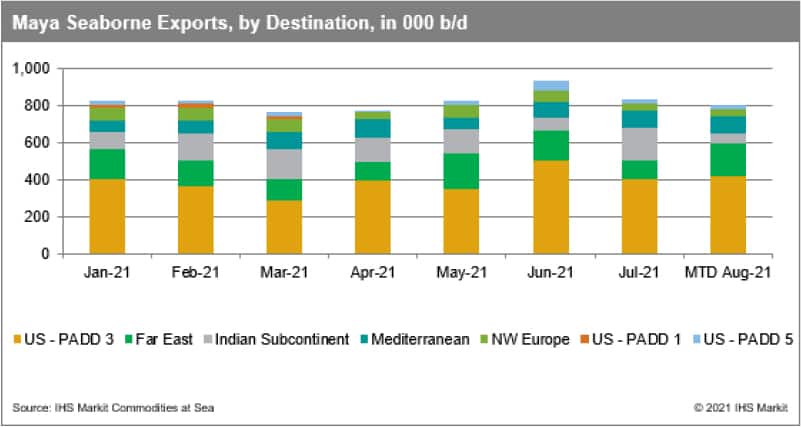 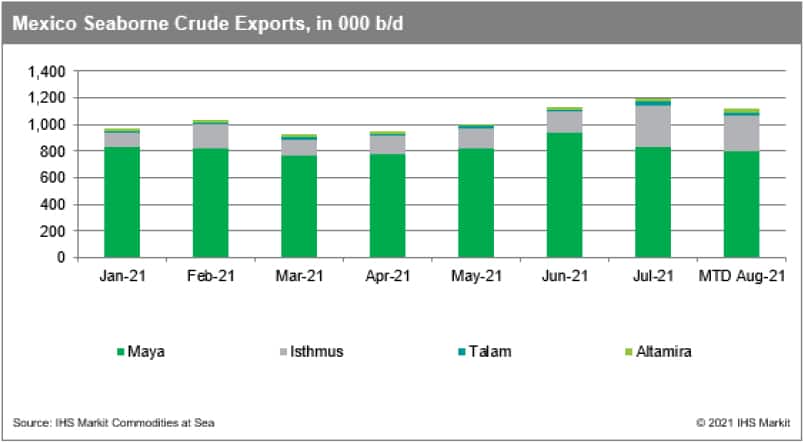