While some IOC's are pulling back from exploration, Petronas is pushing forward with a second high impact well within the Gabonese deep waters following the Boudji discovery in 2018. The Jove Marine well was spudded in early November 2021 and it will test a four-way dip closure in the pre-salt Gamba and Dentale formations in the distal portion of the Lower Congo Basin. With a minimum economic field size estimated at 150 MMbbls of oil at USD$ 70/bbl and the improved chances of an oil-mature source rock following the Ivela discovery, the well, if successful, will further confirm the potential of the pre-salt in the deepwater areas of the basin. The eight additional prospects within the block have a combined estimated 8.7 Bboe in place and may provide significant upside within the block.

The actual contract terms are not publicly available and as such the fiscal model is based on the 2019 petroleum code and 2008 model contract together with rates indicative of publicly available signed contracts. The regime includes cost recovery and profit sharing with the contractor profit share calculated via a progressive sliding scale linked to average daily production. This progressive mechanism is aimed at capturing a greater share of the resource wealth for the state as windfall conditions occur. The impact can be seen from the NPV sensitivity chart showing a deflection of the NPV curve as resource size together with production rate increases. 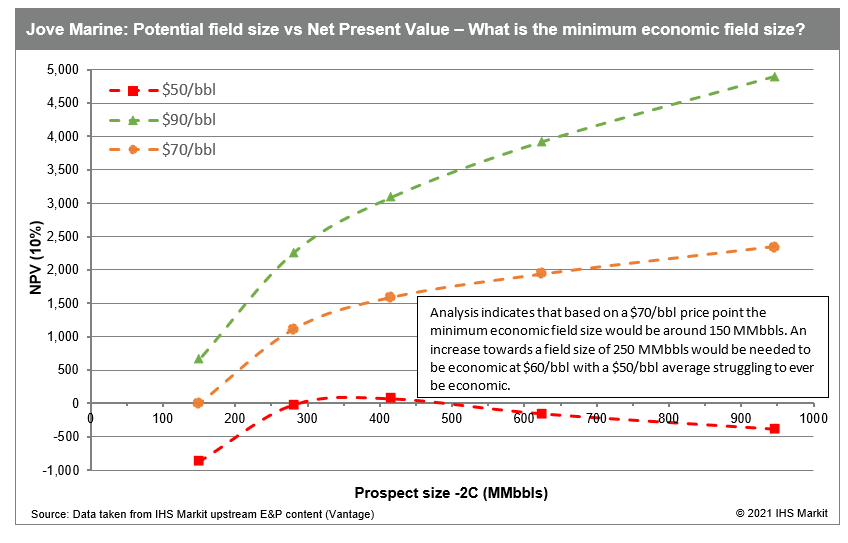