On 14 May, 2021 the Ministry of Economy, Trade and Industry (METI) issued a warning that Japan may face further power supply shortages during this summer and coming winter. The power supply shortage will be the second time in 2021 after the winter supply crunch in January this year. The warning indicates a structural issue within the power sector amid the ongoing energy transition in Japan.

On 7 January 2021, the Japan Power Exchange (JEPX) day-ahead spot price rose above ¥100/kWh. The sudden rise in JEPX has been caused by a multitude of factors, including a sudden surge in demand amid a cold winter spell, LNG supply shortage owing to supply chain (liquefaction capacity and shipping) issues, and a lack of baseload power supply owing to nuclear outage. The supply risk was alleviated by maximizing power outputs of regional generators and captive generators in some instances and the return of Ohi-4 nuclear reactor in the Kansai region, supported by an overall rise in temperatures across the region after mid-January. 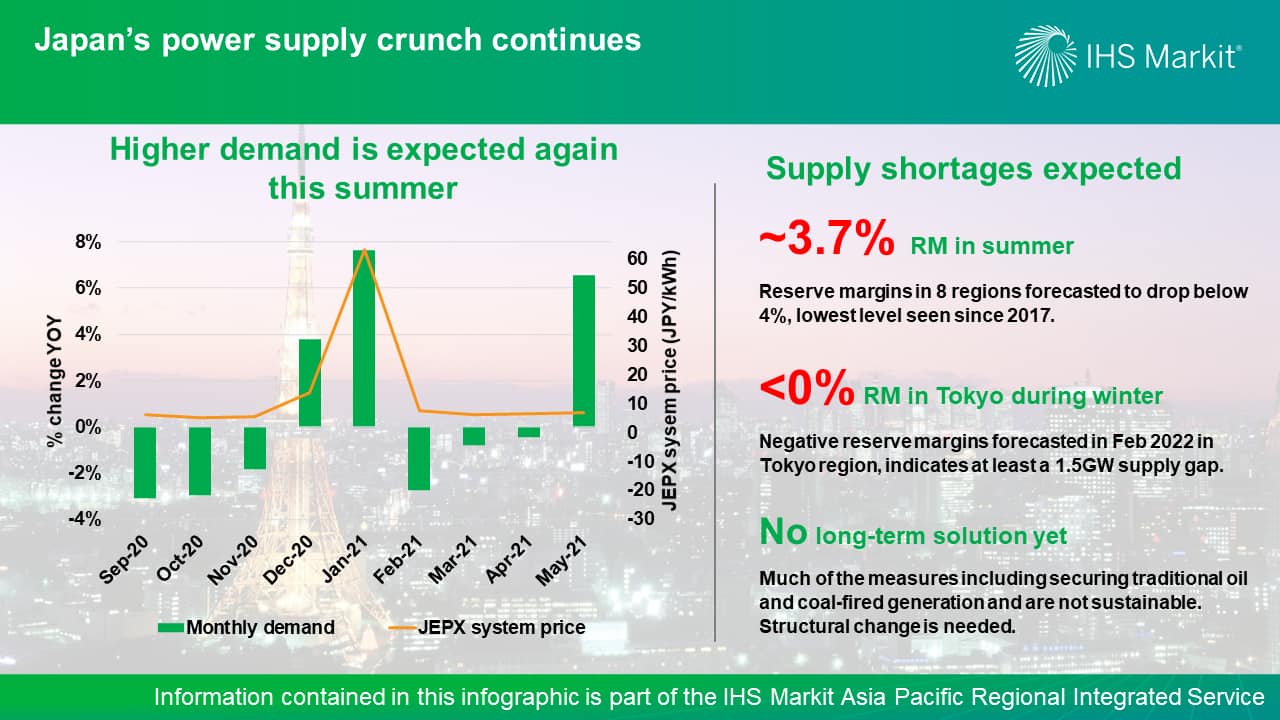 Further supply shortages are expected in 2021

The Ministry of Economy, Trade and Industry (METI) issued a report on 14 May 2021 warning that Japan may face further power supply shortages during this summer and coming winter. Given the warmer summer temperatures forecast by the Japan Meteorological Agency, the Organization for Cross-regional Coordination of Transmission Operations Japan (OCCTO) has indicated that many regions may face dangerously low power reserve margin during the summer months (July-September), particularly in July and August, when margins are expected to be as low as 3.7% in eight regions in Japan, excluding Hokkaido and Okinawa. Reserve margins below 4% have not been recorded since 2017.

An even tighter supply crisis is expected during winter 2021/22, with reserve margins falling below 3% in many regions during February 2022. By February 2022, METI estimates that up to 3.7 GW of thermal power plants will be unavailable as a year-on-year comparison. Tokyo area is forecasted to be at the highest risk, with negative reserve margins expected in February and March 2022.

METI's official power generation data during the peak demand period suggest that the supply crisis was alleviated by ramping up old and expensive oil-fired generation. METI is still evaluating the future measures; however, the current suggested behavioral changes (a call for power conservation) and shifting of maintenance periods are only short-term and indirect measures, and a more fundamental change is needed in the mid- to long term in order to accommodate the increase in renewables.

Japan will face more challenges going forward as it aims to achieve net zero by 2050. The long-term target, along with an additional announcement by Prime Minister Yoshihide Suga to reduce greenhouse gas emissions by 46% by 2030 (versus 2016 levels) is forcing Japan to rethink its reliance on thermal generation. As discussions on the future power mix continues, a coal phaseout strategy is being evaluated concurrently to target its older, less efficient coal fleet.

The government is due to announce details of the sixth Basic Energy Policy this summer, which should include a renewed power mix target for 2030 and 2040 along with a more detailed road map to achieve a net-zero economy by 2050.

Kaori Tachibana is an associate director on the Climate and Sustainability team at IHS Markit and is based in Japan.