Introduction of Green Day-Ahead Market in India: A critical review

After the successful launch of Green Term-Ahead Market (GTAM) in August 2020, India is gearing up to launch Green Day Ahead market (GDAM) — a marketplace for trading of renewable power on a day-ahead basis. The intent is to promote merchant green power plants and provide additional sale avenues to existing renewable power plants that are either facing payment risk with the distribution companies (DISCOM) under the existing PPA or have surplus energy.

The Ministry of Power (MoP), in its order dated March 2021 to the Central Electricity Regulatory Commission (CERC) and the national load dispatch center (POSOCO), issued a directive soliciting the entities to prepare necessary technical, operational, policy, and regulatory ecosystem that will enable the participation of renewables in the Day-ahead market (DAM) alongside thermal generation. The proposed GDAM market structure will be within the existing DAM structure but will create a separate clearing mechanism and price discovery for renewable and conventional energy sources. Both the energy sources will be cleared by the same exchange one after the other, with priority given to renewables. 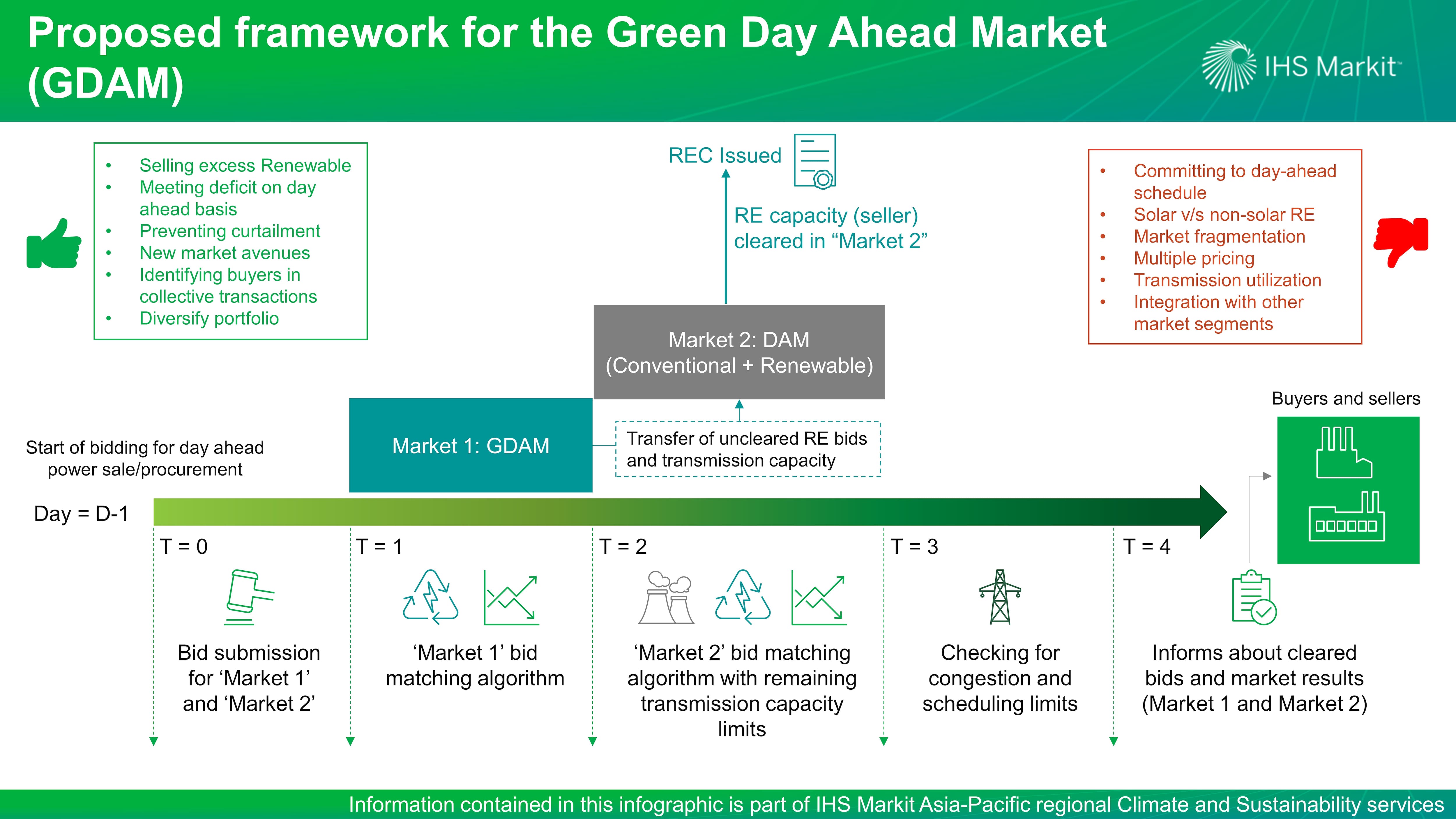 The GTAM allows RE plants to sell renewable generation (solar and non-solar separately), bilaterally, in the open market through exchange without getting into a long-term power purchase agreement (PPA). Since its inception, 972 million units of RE generation (representing 1% of total RE generation during the same period) has been traded in GTAM with an average price of 3.90 Indian rupees/kWh ($55.71/MWh) against the average price of 3.10 Indian rupees/kWh ($44.28/MWh) in the traditional DAM during the same period. With the launch of GDAM, more volumes are expected to come to market and be able to trade on a daily and real-time basis.

In all the major electricity markets globally (Australia, Singapore, European Union, United Kingdom, various RTO/ISOs in US viz CAISO, MISO, PJM, NEEPOOL, ERCOT, NYISO), there exists a single clearing market both for RE and conventional energy sources, i.e., Renewable generators trade under the same market rules as conventional energy generators (except for some relaxations on penalties/costs). Further, these electricity markets have deployed a REC framework to capture the renewability of generation and provide incentives to buyers (if any).

The intent of bringing a RE-specific market is a positive development and intends to bring back investor's confidence. However, the proposed framework could lead to more confusion with multiple pricing and complicated market structure. IHS Markit believes using the existing market structure along with the market-based REC mechanism (DAM+REC) would be better suited for the Indian market conditions and would have less limitations than the proposed GDAM structure. Some proposed benefits of the combined DAM and REC market includes:

Learn more about our research and insight on the India energy market through our Asia Pacific Regional Integrated Service.