In 2016, Taiwan set a target for gas-fired generation to reach 50% by 2025 to phase out nuclear and reduce coal-fired power. New capacity—both gas-fired power and LNG regasification—will need to be developed, given that the existing gas-fired power fleet and LNG receiving terminals ran at 63% and 115%, respectively, in 2020. 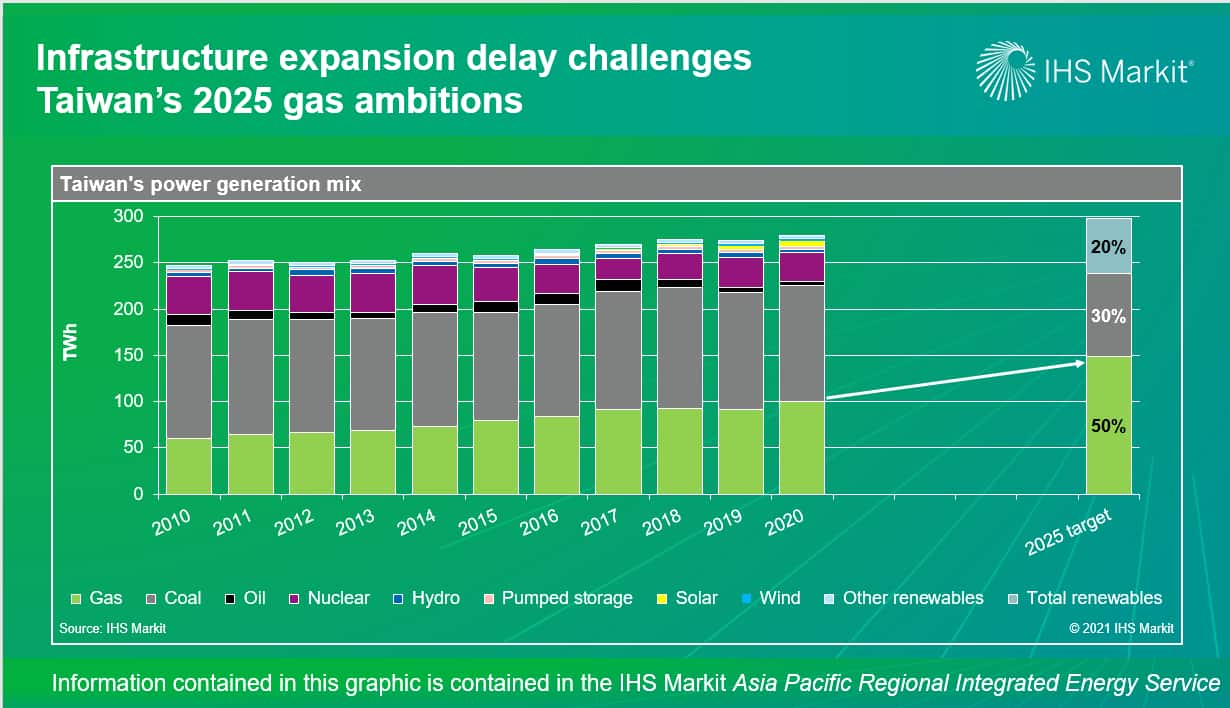 Gas-fired capacity is on schedule to achieve the 2025 target, with 18.5 GW operating at the end of 2020 and 7.0 GW of new capacity under construction. But LNG receiving capacity could be a bottleneck to bring supply to the new power plants, as greenfield projects are facing opposition from local environmental groups and governments.

CPC Corporation (CPC) plans for its 3 MMtpa Taoyuan LNG terminal to start commercial operation in 2023. Although the terminal construction is already half completed, local environmental groups have been challenging the terminal's siting for algal reef protection. Opposition groups successfully included the terminal relocation issue for voters to vote on in the referendum originally scheduled for 28 August 2021 and subsequently delayed to 18 December 2021. In May 2021, Taiwan's Ministry of Economic Affairs (MOEA) proposed a solution to mitigate the impact on the algal reef: extending the jetty by 455 m into the sea and eliminating all additional land reclamation, pushing back the online date to mid-2025 and increasing costs by 15 billion New Taiwan dollars (around US$540 million). The alternative of relocating the terminal could delay the project by 5-10 years.

The jetty part of Taiwan Power Company's (TaiPower's) Taichung LNG terminal is included in the Taichung Port's outer harbor area expansion, which is facing opposition owing to the potential impact on the nearby white dolphin habitat. In addition, the Taichung City Government has not issued the construction permit for the onshore facilities and related gas-fired power units, demanding that TaiPower dismantle its two 550 MW coal-fired units two years after each CCGT unit comes online. TaiPower, on the other hand, only agrees to mothball the coal units to retain them as emergency backup. As a result of the delayed construction, TaiPower has pushed back the online date of the Taichung LNG terminal and gas-fired units from 2024 originally to 2025.

Assuming that the Taichung LNG terminal Phase 2 starts operation in 2022 and the Taoyuan LNG and TaiPower's Taichung LNG terminals in 2025, Taiwan can still attain the 2025 target. Any slippage in the commercial start date for the latter two terminals will jeopardize the achievement of the target. Furthermore, the terminal development delay may create a gas supply constraint during 2023-24, with potential impacts on power supply security.