China's imports of US crude oil are expected to hit record-high levels in July with cargoes shipped in May having surpassed 550,000 b/d. Cargoes loaded on ships in April have been the first since November 2019. Chinese refiners have been rushing to secure bargains when available US crude oil barrels increased, oil prices were under severe pressure due to additional production from Saudi Arabia and tanker freight rates started declining after the peak observed in April. Loading activity has remained strong in first half of June, with volumes above 400,000 b/d so far. This is a massive year-on-year increase, as the USA shipped only 183,000 b/d in May 2019 and 134,000 b/d in June 2019. 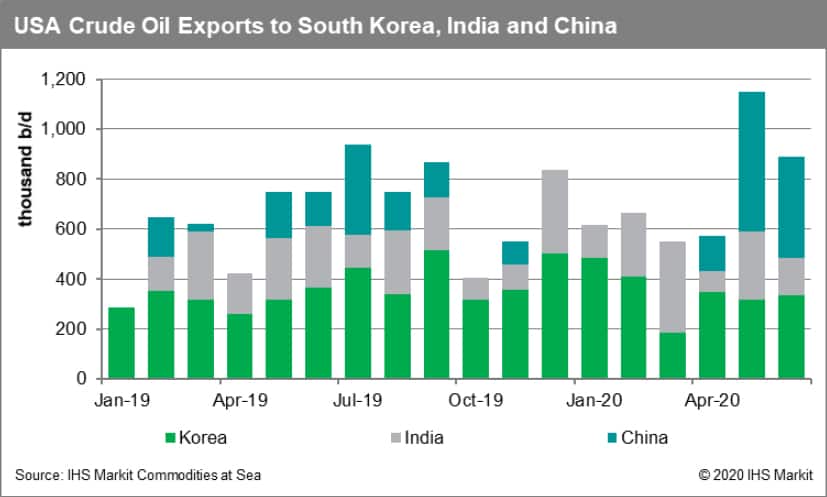 Meanwhile, flows from the USA to South Korea have marginally declined in May as some refiners undergo maintenance while demand remains weak as fuel consumption is hit by the COVID-19 pandemic. South Korea has been heavily relying on barrels coming from the USA, with the country ranked fourth after Saudi Arabia, Kuwait and Russia so far in 2020. Imports dropped close to 200,000 b/d. This is the lowest since late 2018, but the trend is not expected to last as US shipments heading for South Korea have partially recovered since April 2020.

A very different story to tell about South Korean imports of Saudi Arabian barrels which quickly recovered in May while volumes in first half of June have nearly reached 900,000 b/d. 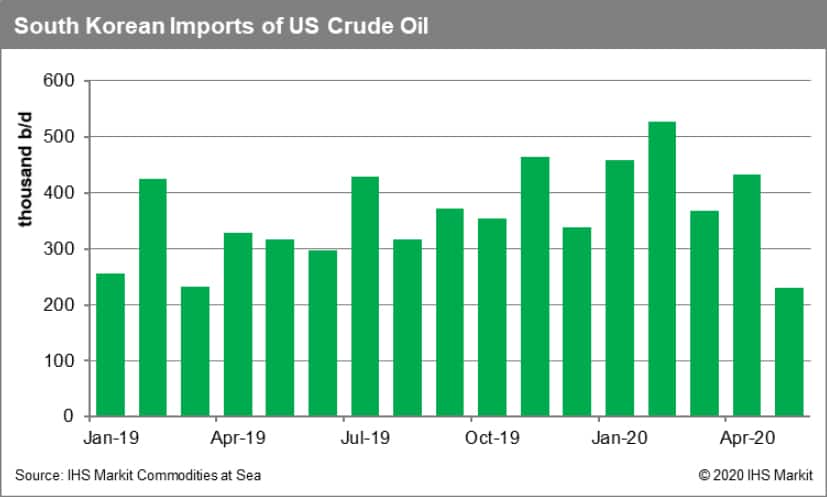 Moving to India, crude oil flows from the USA are now expected to strengthen again, as the country has been trying to reduce its dependence on OPEC producers. India has been importing around 80% of its oil requirements, with OPEC exporters, mainly those in the Middle East Gulf, having the biggest market share. US shipments to India increased quickly in May after sharply falling in April. Local refiners absorbed as much as possible from the Middle East when oil prices were under severe pressure due to additional production and exports, while freight rates reached new record highs. But the market has changed drastically last month, allowing them to focus yet again on US barrels. WTI crude oil processed in India is now understood to represent more than 10% of the country's total processing.