In its recent forecast for the 2019/20 season, the International Cocoa Organization (ICCO) has placed global cocoa supplies at an 80,000-tonne deficit, slightly lower than previously estimated.

The ICCO now points to a cocoa deficit of 80,000 tonnes compared to its previous 85,000 tonnes for the 2019/20 season, with world demand for beans still expected to outstrip supply during the current season.

Total statistical stocks are therefore anticipated to reach 1.638 million tonnes, which is equivalent to 34.2% of projected annual grindings in 2019/20, it said.

The ICCO also revised its forecast for production, which is now pegged at 4.750 mln tonnes, down by 74,000 tonnes compared to its previous outlook. This is owed to downgrades for Ivory Coast, Ghana and Peru, it added.

On the demand side, a downward adjustment revision was also made to the ICCO's estimate for world grindings to 4.783 mln tonnes (down by 78,000 tonnes) and the first annual drop since 2016. Downgraded volumes included; Ghana, Indonesia and Malaysia. 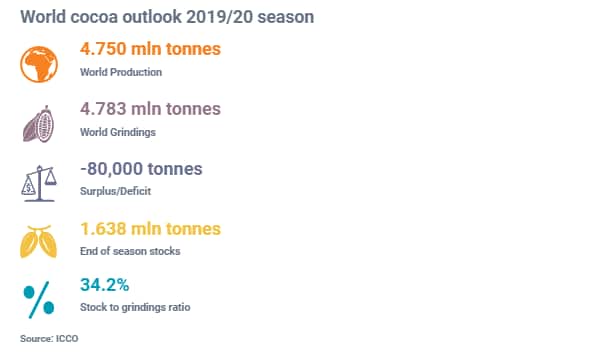 Meanwhile, the ICCO also made revisions to its 2018/19 cocoa season numbers, adjusting cocoa production upwards by 35,000 tonnes to 4.780 mln tonnes, compared to its previous indication. This has led to a production deficit of 52,000 tonnes, from its previously pegged 107,000 tonnes.

The production adjustment was mainly due to revisions for cocoa output from Africa (up by 20,000 tonnes), Asia (up by 16, 000 tonnes) and a reduction of 1,000 tonnes for the Americas, it said.