June reports highlighted hotspots for renewable investments as well as decarbonization efforts and challenges across the globe.

With nearly 2,800 GW of solar and wind capacity expected to be deployed globally over the next decade, new opportunities are arising in both mature and developing renewable markets around the world. The IHS Markit Insight "Which power markets globally are the most attractive for renewable energy investments?" uses IHS Markit's Global Renewable Market Attractiveness Rankings to assess the promise of solar photovoltaics (PV), onshore, and offshore wind investments across 35 markets, finding the United States to be the top spot for renewable investments, followed by Germany and France. Mainland China and Japan are the front-runners in Asia. While market size matters when evaluating a region's attractiveness, other important parameters include the policy and competitive environment, investor friendliness, infrastructure readiness, and revenue risks and return expectations. How different investors value different market attributes also has a big impact on a region's attractiveness for investment. 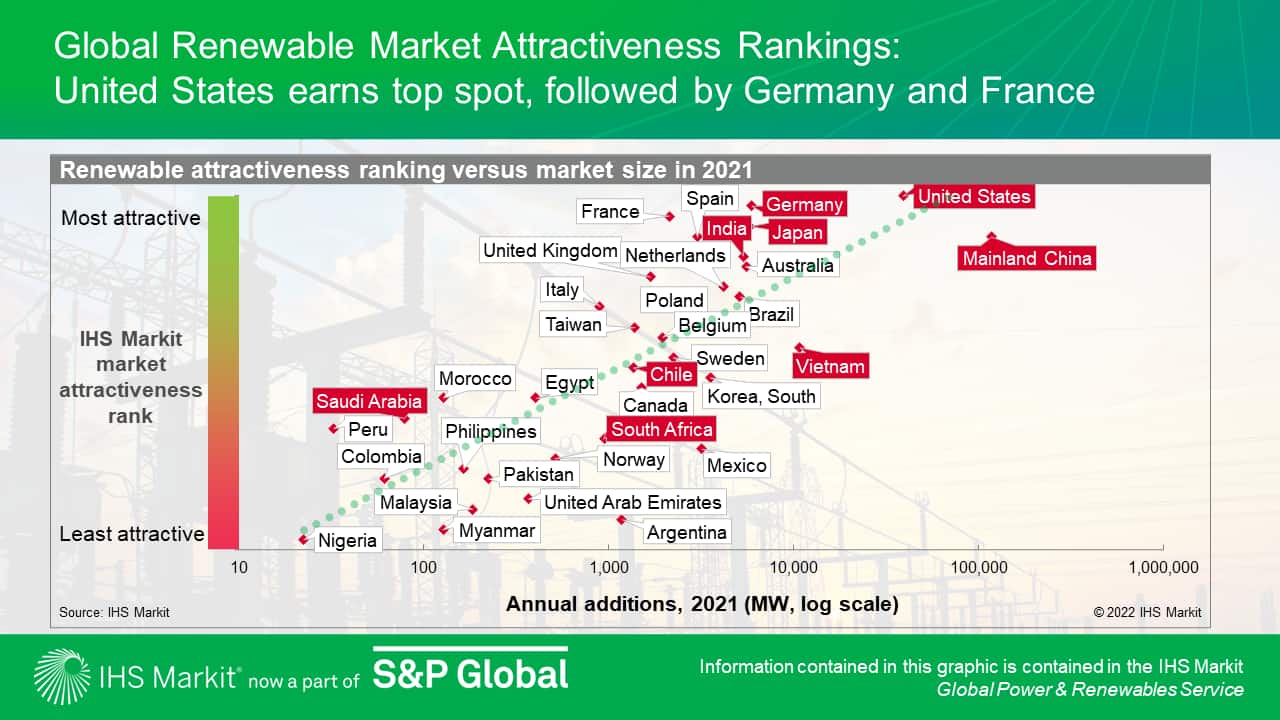 The energy transition has become an imperative. During the Glasgow negotiations last year, many countries across the globe put forth or updated their decarbonization targets and many are now looking to accelerate clean energy deployments in the face of ongoing tight fuel markets and rising commodity prices, exacerbated by the Russia-Ukraine crisis.

At the same time, significant challenges to decarbonization persist. The IHS Markit Insight "Decarbonizing while growing: Energy transition in Southeast Asia's power sector"sets the stage for the environment in Southeast Asia. According to the report, the region will face an uphill challenge as it looks to decarbonize during a rapid growth period. Incremental power demand will be met partially by conventional fossil fuel generation, which raises questions about the fate of coal-fired power plants, adequacy of natural gas supply, and prospects for emerging technologies, such as carbon capture and storage, hydrogen, and energy storage. While renewables will need to meet an increasing share of load growth, concerns remain about the power system's readiness to accommodate more intermittent generation sources and the ability to attract more investment in the sector. Against this backdrop, governments will be faced with a balancing act, between the energy transition and keeping power prices affordable for consumers.[1] According to the IHS Markit Strategic Report "Are Southeast Asian power systems ready for the rise of renewables?", all countries in the region will require grid enhancements to accommodate more wind and solar capacity, although Vietnam and Indonesia will face the toughest challenge to accommodate more renewables. The creation of renewable energy zones could help coordinate power system planning and allow for faster wind and solar development, but staying consistent in planning will be critical for governments. While flexible generation is not a newly established technology, the status quo will also need to be changed to enable its development in the region. 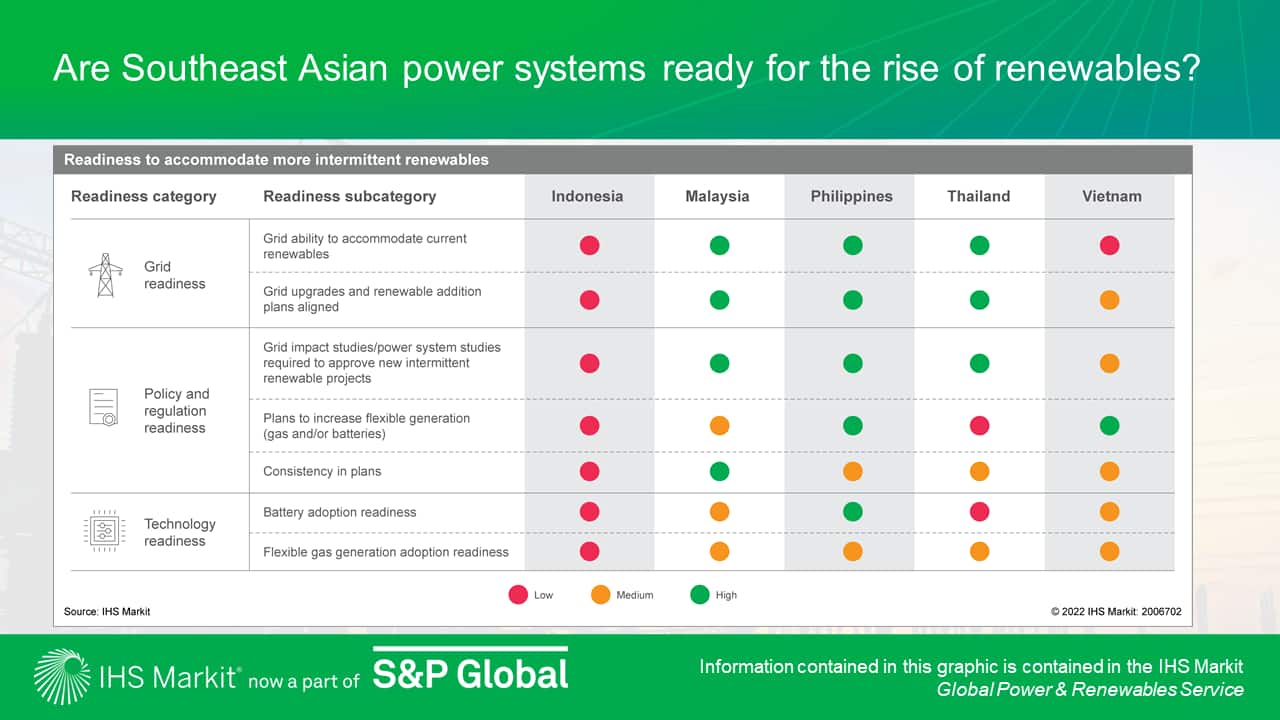 In China, power demand decreased by 1.3% in April—following a massive COVID-19 flareup and ensuing government lockdown measures—but is now back on an industry-led recovery path, despite uncertainties. According to the IHS Markit Insight "As COVID-19 lockdowns ease: China's power demand back on a recovery track albeit at a slower pace than 2020", coal and gas generation took most of the incremental demand loss hit while renewable generation remained resilient. At the same time, the lockdown has triggered disruptions in clean energy supply chains, especially for solar PV and batteries, which continue to face production delays. Despite the headwinds for gas, climate commitments are accelerating gas-fired capacity additions in the country. According to the IHS Markit Insight "China's gas-fired power: Aggressive build-out ahead despite short-term headwinds", 72 GW of new capacity is expected to come online during the 14th Five-Year Plan (FYP) period ending in 2025-more than double the amount added in the 13th FYP period-with the role of gas shifting to provide low-carbon flexible generation for grid reliability.

In Australia, Anthony Albanese was sworn in as the 31st prime minister in May 2022 following a decisive victory of the Australian Labor Party. According to the IHS Markit Insight "Federal elections to redefine Australia's energy policy", the incoming Labor party has pledged to set a 2030 emissions reduction target of 43%, accelerating Australia's path to net-zero beyond the outgoing government's 2030 target of 26-28%. Despite differences between the incoming and outgoing parties, some aspects of Australia's energy transition, including coal phaseout and hydrogen development, are expected to maintain course.

On 15 June 2022, for the first time in history, the Australian Energy Market Operator suspended the electricity spot market in the National Electricity Market (NEM). According to the IHS Markit Insight "Australian electricity market suspension provides a signal to project developers", a culmination of factors led to the suspension of the market, including planned and unplanned thermal outages, an early onset of winter, fuel supply issues, and high fuel spot prices. While most factors are expected to resolve themselves in the near term, they expose vulnerabilities in the NEM that, if left unaddressed, could result in subsequent events in the future. Notably, the impending coal retirements in the country will permanently remove a once vital source of firming supply from the market. Significant investment in transmission infrastructure will be required for renewable capacity to be added to remote portions of the grid, while market reforms are required to incentivize the location of new capacity, increase certainty of access to the grid, and enable investment in firming capacity. According to the IHS Markit Insight "Call for market reforms sparks as commodity price hike raises power prices to new highs—A dive into responses seen in Australia, Japan, and Singapore", market reforms are also needed in Japan and Singapore to ensure the foundations of power market liberalization are protected against future extreme price events. This includes not only diversifying and securing capacity and/or fuel, but also developing power futures and other market mechanisms—all against the backdrop of these countries' energy transition and net-zero goals.

Europe, which has been hit hard by the Russia-Ukraine crisis, has been focused on accelerating its energy transition and weaning off Russian gas. Yet, according to the IHS Markit Insight "European power: A coal and nuclear revival?", security of gas and power supply and political decisions are driving a number of countries in the region to study the possibility of delaying—and implementing the delay of—scheduled closures of existing thermal power plants (notably coal and nuclear units). Postponing these closures could help European countries reduce up to 2.6 Bcm per year of natural gas consumption.

In Mexico, wind and solar developers are expected to continue facing challenges to move projects forward. According to the IHS Markit Insight "Mexico's natural gas and power prices short-term update: Increasing pressures from high natural gas prices in the United States, Mexico's main source of supply", while higher fuel prices could create momentum for lower-cost wind and solar resources, the ongoing regulatory roadblocks will constrain their growth in the short to medium term. The pending resolution to the lawsuits against the 2021 changes to the power industry law (LIE) will be critical to the future of the renewable industry in the country.

In Québec, the energy regulator approved in May 2022 a greenhouse gas emission reduction program jointly proposed by Hydro-Québec and Énergir—the largest electric and gas utilities in the province, respectively—that aims to eliminate approximately 0.5 million metric tons of carbon dioxide emissions from water and space heating by 2030 using targeted electrification. Under the program, Hydro-Québec will pay Énergir for natural gas demand lost to electrification for 15 years following conversion. According to the IHS Markit Insight "Québec leads the way in North America for reducing greenhouse gas emissions from building heat with both natural gas and electricity", a hybrid gas-electric approach to space heating decarbonization in cold climates addresses the "peak challenge" posed by an all-electric pathway. This combined natural gas-electricity approach to heat decarbonization is novel in North America—Québec is the leader, but several states may be close behind.