Despite the disappointing result of the recent 35/11-25 S (Apodida) well, the Troll-Fram area has still provided Equinor with four successful exploration wells since 2019. New missed pay opportunities have been unearthed through the reinterpretation of seismic and offset wells which has resulted in an estimated recoverable resource range of 192-302 MMboe across all four discoveries. With further prospectivity being targeted in the near future, a new coordinated development could be on the horizon in this mature hydrocarbon province.

The Start of Success

Equinor's exploration campaign in the Fram area initially got off to a slow start in late 2018 with the Gnomoria discovery (1.25 - 7.5 MMboe) in PL 630. This was then followed up in early 2019 with the Bergand discovery (1.25 - 4.4 MMboe) in PL 248 C. Despite discovering non-commercial volumes, these two discoveries de-risked other prospects in the area and laid the platform for future exploration success.

In late 2019 the first commercial discovery of the campaign was achieved by the 35/11-23 exploration well which targeted the Echino South prospect in PL 090. The well discovered 60-75 MMboe across the Upper Jurassic Sognefjord Formation, Brent Group and Viking Group. This discovery significantly de-risked the Blasto and Apodida prospects which were also located in PL 090/PL 090 I.

Success continued into 2020 with the 35/11-24 S well which targeted the Swisher prospect located 3 km east of the Bergand field in PL 248 C. The well targeted the same reservoirs as the Bergand discovery with a total of 13-38 MMboe being discovered in the Upper-Middle Jurassic Viking Group (Heather Formation).

2021 continued to deliver further discoveries starting with the Rover North field in January, where the 31/1-2 S exploration well discovered an estimated 44-69 MMboe of recoverable resources. Whilst the prospect was located in a different licence (PL 923) to the previous discoveries, the main well target was the Jurassic Brent Group that formed part of the reservoir at the Echino South discovery.

In March the 31/2-22 S well made the largest discovery on the NCS so far this year, discovering 75-120 MMboe at the Blasto prospect. The well targeted the same Sognefjord Formation as the Echino South field and discovered a 30 m and 50 m oil column in the upper and lower parts of the formation. This area had been previously targeted by the 31/2-8, 31/2-21 S (Gotama) and 31/3-4 (Mantra) wells which all encountered the Sognefjord Formation but were classified as dry holes. Therefore, robust technical evidence was required to de-risk the Blasto prospect which came in the form of AVO analysis and re-evaluating 4D seismic data.

Equinor's run of discoveries came to an end in June when the 35/11-25 S and 35/11-25 A wells which were targeting the Apodida prospect both came in as dry. Despite both wells discovering moderate to good quality sandstones across the Sognefjord and Etive formations, both reservoirs lacked any hydrocarbon indicators and have subsequently been plugged and abandoned.

Looking at the remainder of 2021, Equinor is planning on drilling another prospect in PL 630 named Toppand which is expected to spud in Q4. This well will likely have a similar target to the Gnomoria field which was the first technical discovery of this drilling campaign. Equinor has also contracted PGS to perform a 417 sq km 4D seismic survey in the Fram area which is scheduled start in July. Given the success of using 4D seismic to de-risk the Blasto prospect, this new survey will aim to de-risk additional near-field exploration targets.

Equinor is currently evaluating all of these discoveries with the aim of submitting PDOs prior to the end of 2022 in order to benefit from Norway's temporary tax relief incentives. DNO has already announced that the Rover North field could potentially be a fast track, subsea tie-back development candidate with a PDO submission expected in 2022. The Echino South and Blasto discoveries are currently expected to form a coordinated development tying into nearby infrastructure. However, given the total recoverable reserves from these 3 fields exceeds 200 MMboe, a new standalone coordinated development similar to NOAKA should not be ruled out. 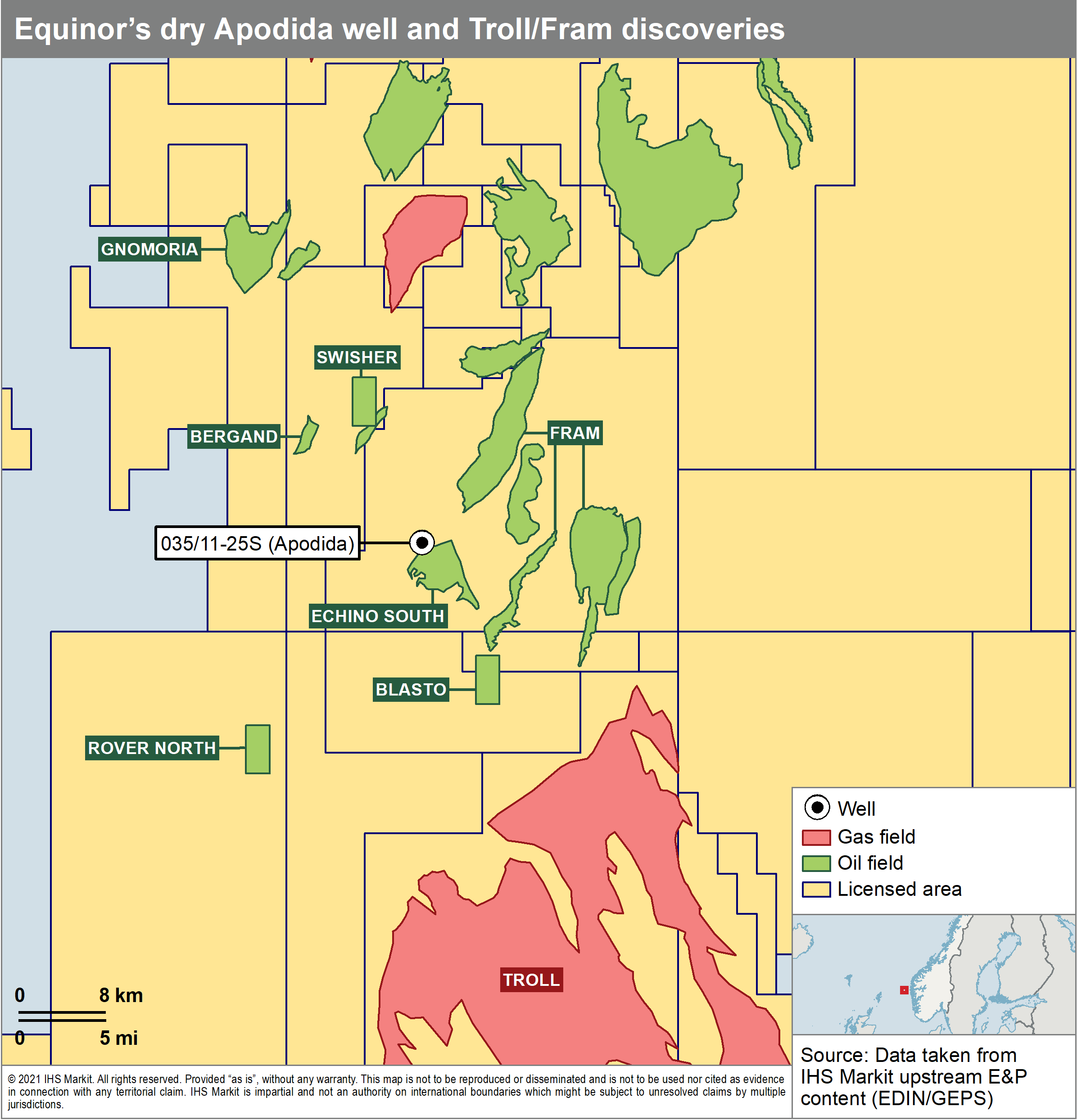 Alex Wyer is a senior technical researcher for upstream energy at IHS Markit.