India's LPG penetration rate reached 99.5% following the completion of its landmark Pradhan Mantri Ujjawal Yojana (PMUY) program. India Prime Minister Narendra Modi's PMUY program targeted to reach 100% LPG penetration in all states by the end of the financial year ending in March 2023. Monthly LPG demand in the residential/commercial segment increased from 1.71 million metric tons (MMt) in September 2017 to 2.03 MMt in September 2019 and is expected to further increase to 2.38 MMt by the end of 2021, approaching full LPG penetration in all states. The country's eastern states are among the areas with lower LPG coverage. East coast LPG infrastructure developments will help enable higher LPG penetration in the region. Indian LPG demand will continue to grow, but as the country pushes for a gas-based economy, piped natural gas (PNG) will likely take a bite out of LPG's market share over time, especially in western India.

India marked the beginning of the most significant LPG connection drive in the world via the rollout of the PMUY program to provide deposit-free LPG connections to below-poverty line households on 1 May 2016. The program was one of the biggest catalysts and enablers for employing a cleaner fuel, LPG, to be used for cooking, and was in line with India's Paris Agreement commitment to reduce its greenhouse gas emissions.

The PMUY program initially started with a target of providing 50 million LPG connections; the target was subsequently raised to 80 million connections, and this was achieved by September 2019, with a 96.5% LPG penetration. The LPG coverage has since continued to grow and reached 99.5% by January 2021 (see Figure 1).

Under the Liquified Petroleum Gas (Regulation of Supply and Distribution) Order 2000, one household is eligible for only one connection. Under the regulation, a family comprising a husband, wife, married children, and dependent parents who live together and share a common kitchen is considered as one household. In order to compare the LPG penetration among states, the Indian government developed an estimate of LPG coverage (%). The LPG coverage is estimated based on the ratio of number of connections to the number of households in the state. The number of households for the year 2021 is estimated by extrapolating the 2011 household census data, which is published by the Government of India every 10 years. IHS Markit utilized this information to provide a view of LPG penetration. 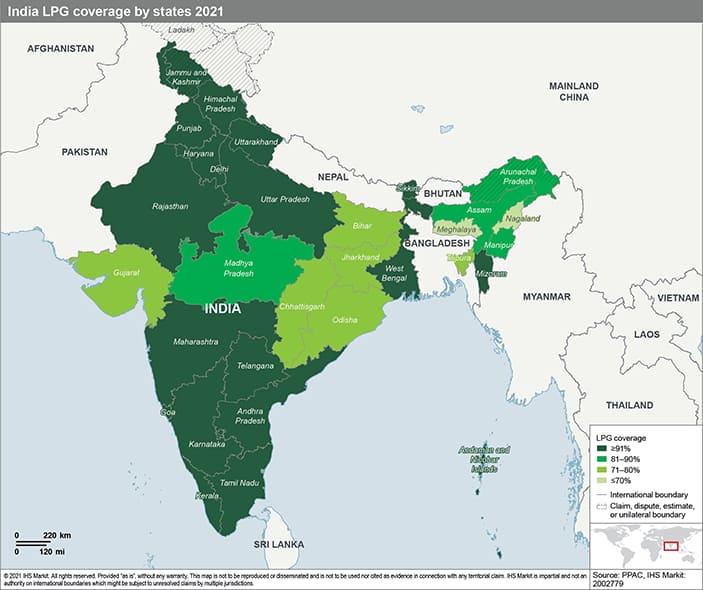 The western states in India are generally more advanced in terms of infrastructure and family income when compared with the eastern states, which is the primary reason why a larger number of PMUY beneficiaries are from the country's eastern region. However, as Indian GDP grows, the number of LPG connections and disposable income of citizens will also grow. This will lead to an increase in LPG cylinder refill rates, especially from the PMUY beneficiary customer base, calling for additional import and bottling capacity in the region. The west coast infrastructure will continue to be enhanced owing its vicinity to the Middle East and potential nondomestic LPG demand growth, while growth in demand for LPG for cooking from eastern states will drive long-term domestic LPG growth in the country. 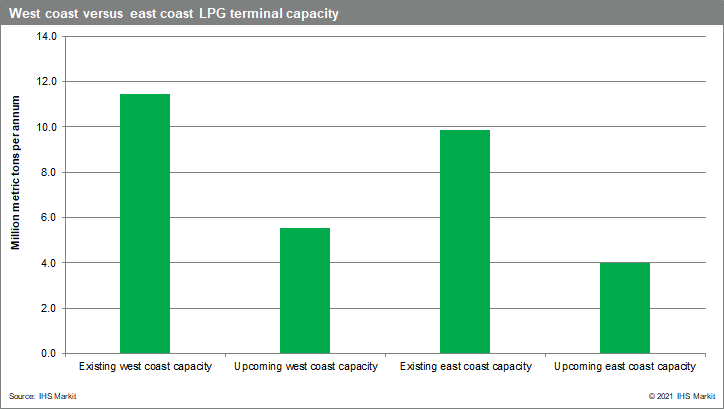 The western region will lead the way toward a natural gas-based economy, posing risk to LPG coverage

The Indian government's push for the natural gas-based economy will increase natural gas usage in the energy sector. Under the City Gas Distribution (CGD) policy, pipelines are being planned, constructed, and commissioned to connect the consumer with PNG access. This includes sectors like domestic and commercial, which have been mainly served by LPG. This poses some risk to further LPG penetration and could also at the same time erode LPG's share in these end-use markets.

For every 1 million domestic LPG connections converted to PNG, about 110,000 metric tons of LPG demand is lost per year. The natural gas pipeline additions will take time, and LPG demand is still expected to register an annual growth of 3-4% in the near term. 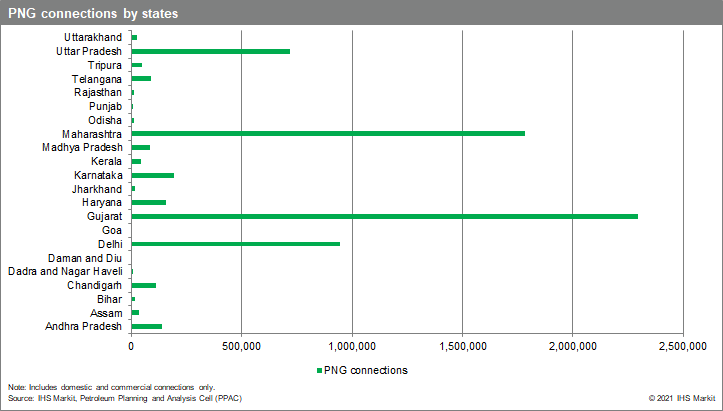 As western states in India are relatively well off in terms infrastructure and income, PNG connections are more prominent in the western region, supporting future PNG growth. As a result, this region's LPG demand growth could be limited; for example, Gujarat has the highest number of PNG connections, leading to lower LPG coverage (see Figure 1 and 3). However, the eastern region is likely continue to support LPG demand, given the region's better LPG connectivity and infrastructure situation as compared with that for PNG.