Crude Oil Trade: What could follow the drone attacks in Saudi Arabia?

Drone attacks which damaged critical oil production assets in Saudi Arabia will alter global crude tradeflows. The country's oil output is estimated to drop by up to 5.7 million b/d, or nearly half of Saudi Aramco's capacity and about 7% of global production. The fires were quickly put under control, but recovery after the damage caused won't prove an easy task. The attack against Abqaiq, Saudi Arabia's largest oil processing facility, has been without doubt the largest disruption in history with a massive impact on oil prices as balances between supply and demand may now turn quite fragile. Even as clarity around the size of the damage remains sketchy, the market focus will be on how tight global supply could turn after this disruption, instead of panicking about world oil demand growth approaching its weakest levels since 2009. There is simply no more spare capacity of global oil production left to secure energy security if geopolitical conflicts escalate.

Since the beginning of 2019, around 6.4 million barrels of Saudi Arabian crude oil has been imported around the world daily, according to data from IHS Markit Commodities at Sea. The majority of these volumes have been absorbed by Asian importers, with China having imported marginally above 1.2 million b/d of Saudi Arabian barrels between January and August 2019. China is heavily relying on Saudi Arabia, which has been supplying around 15% of the country's seaborne imports. However, the exposure of other importers to Saudi Arabia has been much bigger, with Japan and South Korea having imported around 38% and 25% respectively of their requirements between January and August. The big difference between these two countries and China is that they have been increasing volumes imported from the US, while most Chinese buyers have been avoiding US barrels since 2018 Q4, due to the ongoing trade war between Washington and Beijing.

Countries such as India have also been heavily relying on Middle Eastern Gulf barrels, with 18% of volumes imported by India since early 2019 coming from Saudi Arabia. As India is heavily relying on other exporters near Saudi Arabia, such as Iraq, any further disruption in the region would cause severe insecurity for the country. India will probably start looking to import more from other regions as well, even if price differentials are not that supportive. 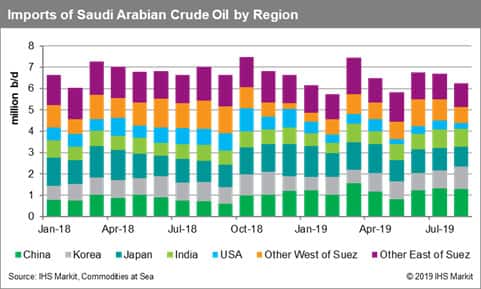 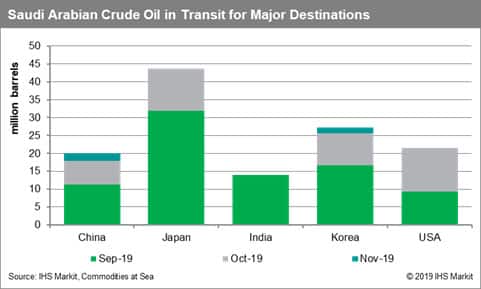 Key Asian importers will have to quickly switch to new suppliers, if stocks built so far don't prove enough to cover their thirst for crude oil. The US has been importing around 400,000 b/d of Saudi Arabian crude oil since the beginning of 2019, with a significant drop to observe since last year, when levels stood close to 730,000 b/d on average. This still represents close to 11% of US seaborne imports, but other suppliers across Latin America could fill the gap if needed. The shortage in the market might affect the future of Venezuelan crude oil trade flows, as a long-lasting tight supply might cause Washington to consider waivers for specific countries or companies. We could start seeing more Iranian crude oil imported once again to countries such as India and China, even against the will of the US. 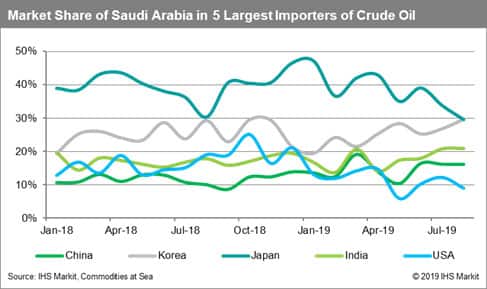 Other countries that could increase their output include Russia, Kuwait and the UAE, that have been participating in the OPEC+ production cuts, but this could only add up to a million b/d which won't be enough to offset the massive Saudi Arabia outage.

Meanwhile, oil inventories held by OECD countries are estimated to be around 1.5 billion barrels, with no clarity on China's stock, which is thought to have reached hundreds of millions of barrels, but with little data published by the government.

IHS Markit Commodities at Sea tracks floating storage of crude oil, with levels having dropped during the last month, as prices were previously under severe pressure. This is a clear negative for quick availability of volumes. 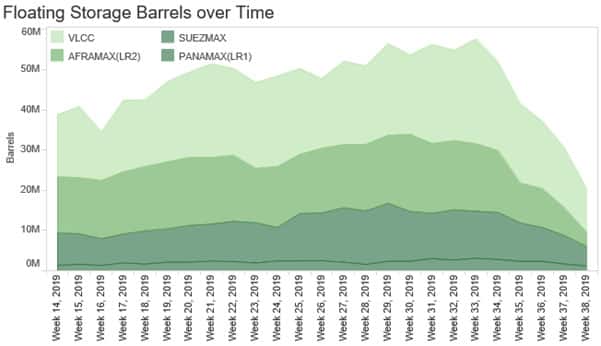 Overall, Saudi Arabia will continue to export oil like normal for as long as their inventories of already produced oil will allow. IHS Markit estimates current levels available for exports or domestic refining runs to be between 50 and 80 MMbbl.