US seaborne exports of crude oil will not surpass 3 million b/d in October, as preliminary data by IHS Markit Commodities at Sea has shown. This level was almost reached last month, just like June, but activity during the first three weeks of October suggests that shipments will only marginally exceed 2.5 million b/d this month. Shipments on Aframaxes and VLCCs have been pushed down month-on-month, most probably as a result of the increased cost of shipping after the US sanctions on the COSCO fleet, while Suezmax loadings have managed to further expand. 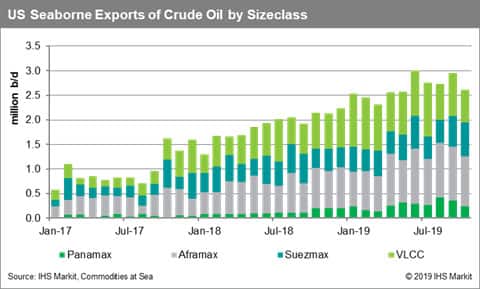 China seems to be still importing crude oil from the US, but shipments have been kept minimal due to the tariff blocking easier access to supplies. Shipments from the US to China haven't surpassed 150,000 b/d since August 2019, with nothing loaded during the last couple of weeks heading to the world's biggest importer. From September 1st, Beijing announced a 5% levy on US crude. As long as supply remains oversupplied, traders are left with several other alternative barrels to tap into. South Korea and Taiwan remain the major importers of US crude oil barrels in the Far East, with the region's market share standing above 25% since January 2019. 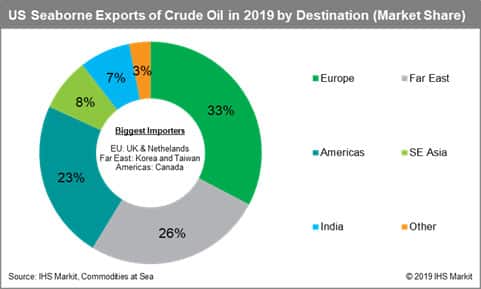 Meanwhile, flows from the US to Northwest Europe have remained strong, with the entire continent having absorbed a third of US shipments so far in 2019. Volumes were pushed much higher since late August, having approached one million b/d both in September and this month so far, primarily due to demand for US grades in the UK. Meanwhile, flows from Europe to the US have a market share of just 8%, very similar to what Russia alone and West Africa have been supplying to the US since the beginning of 2019. 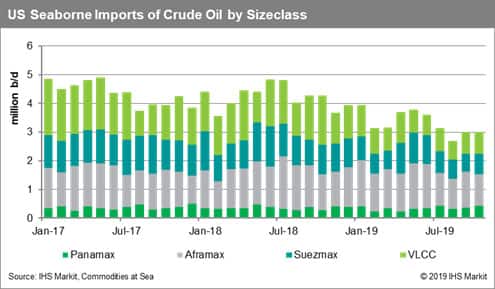 Saudi Arabia remains the top crude supplier to the US, with the market share of the entire Middle East Gulf region standing at 27% so far in 2019. Other suppliers across the Americas, primarily Canada, Mexico, Brazil, Ecuador and Colombia have been strengthening, with their share standing above 40% so far this year. 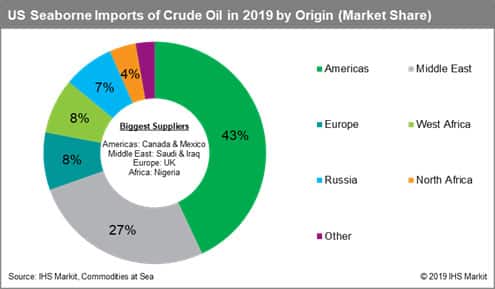 Focusing on crude oil exports from the US, the rise in volumes since last year has been very clear, with the country set to turn into a net exporter by early next year. Some US grades have been popular, with global demand for sweet (lower sulphur) crude oil produced from the Permian Basin in the US across a wide range of importers to continue driving this trend. Refineries demanding sweeter crude oils to produce low sulphur marine fuels as we approach IMO 2020 are interested in US barrels. Moreover, as most US refineries are built to primarily process medium and heavy sour crude oil barrels, exporting domestically produced crude oil is the only option for the US. That's why we don't expect imports to drop much from now on.