South Sudan might start selling crude oil directly to its neighbours, after Ethiopia expressed its interest to buy oil from the country, in an effort to avoid the increased cost of importing from the Middle East. Demand in the East African country continues to grow, but the higher cost of transportation cannot be ignored. With a population of more than 100 million people, demand for oil products has been increasing by more than 10% annually, according to Ethiopia's State Minister of Mines and Petroleum. The country plans to start importing cheaper refined oil from South Sudan instead of the Middle East.

Meanwhile, Egypt signed a Memorandum of Understanding with South Sudan for cooperation in the field of oil and gas. South Sudan Minister of Petroleum Awow Daniel Chuang noted that the country's oil has reached 178,000 b/d, with "hope to reach 250,000 b/d in the near future".

South Sudan also announced its first ever licensing round which will be launched in the first quarter of 2020. This will put 13 onshore blocks for tender, with several international exploration and production companies having already expressed their interest. In August, a new oil discovery was announced in the Adar oil field in Block 3, with more than 37 million barrels of recoverable oil, by the Dar Petroleum Operating Company, a consortium led by CNPC.

Focusing on seaborne exports of Sudan, based on data by IHS Markit Commodities at Sea, volumes surpassed 160,000 b/d in October for the first time since April 2019, mostly on Aframaxes. More than 80,000 b/d were loaded last month with destination China, but the world's biggest importer's market share in Sudanese shipments dropped below 50%, partially affected by the increased cost of transportation during the last month. 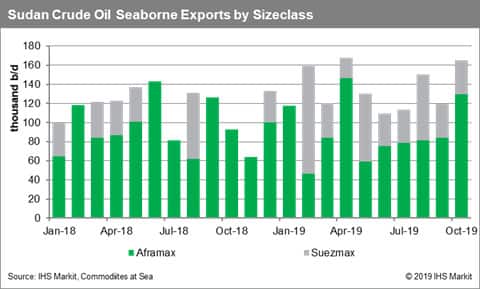 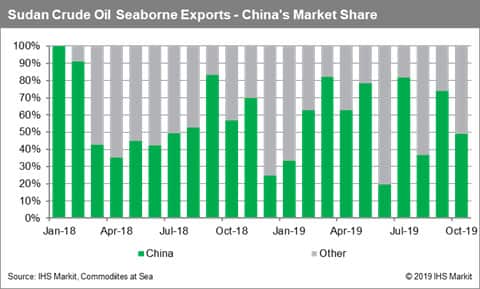