Russia’s production of crude oil has been slowing down, with last month’s output having reduced to 11.24 million b/d, around 50,000 b/d lower than August. These levels are however still above the quotas agreed at OPEC+’s production cut deal. Russia was originally planning to produce marginally less than 11.2 million b/d, 228,000 b/d lower than its output in October 2018. Following the drone attacks on Saudi Arabia’s oil infrastructure, output and liftings of Russian crude oil seem to have marginally strengthened. Data by IHS Markit Commodities at Sea shows, seaborne exports have remained above 5,300 thousand b/d since May. The year-on-year growth in September 2019 stood at 11%, very close to the average we observed so far this year. Loadings between May and July increased by almost 20% year-on-year, following the contamination crisis in the Druzhba Oil Pipeline. Seaborne flows were the only option for Russia to export during that period, with year-on-year growth in June loadings from the Baltic and Black Sea reaching 38% and 21% respectively. Activity has returned to normal levels since late summer. 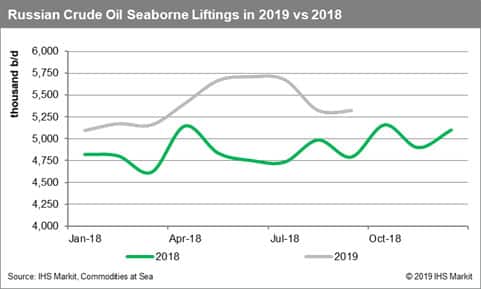 Volumes loaded at Baltic ports represent around 36% of Russian crude oil seaborne exports so far in 2019, with the market share of the Black Sea standing a bit higher, on average 40% between January and September. Meanwhile, barrels from the Russian Far East usually imported by nearby countries account for around 20% of the country’s seaborne exports of crude oil. In terms of destinations, European importers continue to absorb most Russian barrels, primarily those loaded in ports across the Baltic and Black Seas, with flows standing marginally above 3.4 million b/d so far in 2019. Far Eastern countries have been importing around 1.2 million b/d, with more than 900,000 b/d of them loaded in the Russian Far East. Americas, primarily the US, have been absorbing less than 400,000 b/d, with similar volumes ending in other destinations around the world, mainly South East Asia. 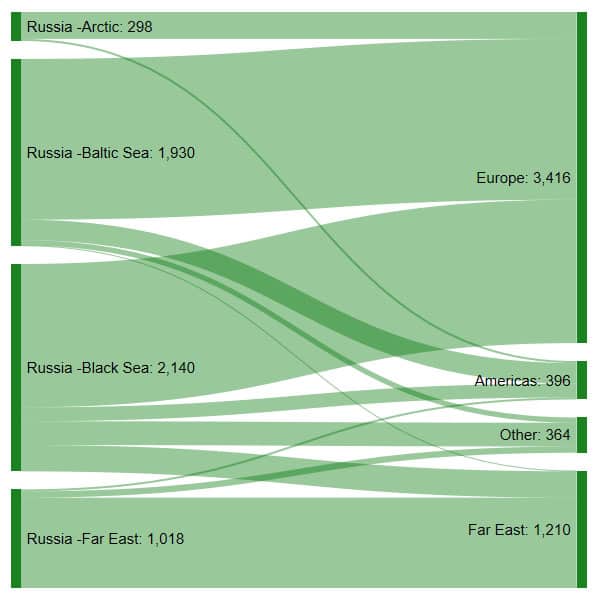