There are only days left till OPEC's next meeting, with all eyes now on Russia's response. It's now clear that even if some of the cartel's members would have wished to be able to increase their production, the performance of oil prices this year does not provide an opportunity for any further thought. OPEC members will proceed with the current agreement which will stay in place at least till the end of 2020 Q1. But it won't come as a surprise if this week's meeting results in deeper cuts. However, the big question is whether Russia which has been leading the coalition of OPEC+, together with Saudi Arabia, is willing to negotiate further cuts. The message has been clear, with no appetite for such a deal. Officials of OPEC members such as Iraq's oil minister did, however, commented that the group would discuss further cuts of 400,000 b/d, which would bring the total to 1.6 million b/d.

Focusing on Russia, the country's crude and condensate production has remained above its target level under the OPEC+ agreement, with November's output estimated around 11.24 million b/d. This would simply mean that Russia hasn't been fully complying, even if it has gradually reduced its production since early 2019. Moscow's argument is that the crude supply disruptions caused earlier this year by a major contamination of crude shipped to Europe via the Druzhba pipeline pushed production marginally higher after the summer. This has caused production to surpass Russia's target under the OPEC+ deal since August.

Russian energy minister Alexander Novak has been saying that the country has been aiming to comply but meanwhile has been trying to exclude new condensate volumes from its quota. With more gas fields to come on stream, there will be more condensate which won't be exported. The ministry has been estimating condensate volumes around 8% of current total production.

In terms of shipments of crude oil, Russia maintained activity close to 4.7 million b/d in November, with the market share of the Baltic Sea having slowed down in favour of shipments from the Black Sea. Year-on-year between January and November, shipments from Russia went up 3%, as data by Commodities at Sea suggests. 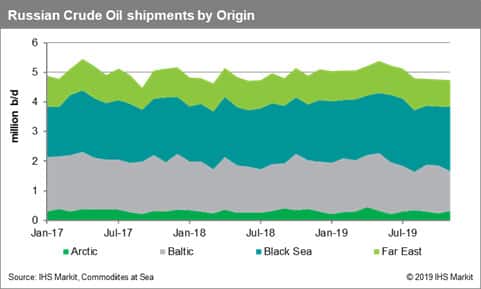