Russia's production of crude oil did not exceed 11.25 million b/d in first half of October, according to official data released earlier this month. Production is estimated to have fallen 20,000 b/d since September, which is still marginally above its quota level of 11.91 million b/d, agreed during the last OPEC+ meeting.

However, this must be pleasing Saudi Arabia and other members of the cartel, as Moscow seems determined to meet its quota, as Energy Minister Alexander Novak recently commented. As the leading producer among the "+" countries, ten producers participating in the production cut deal together with OPEC, Russia has agreed to cut 230,000 b/d from its production in October 2018, which stood at 11.421 million b/d.

Russia explained that its production in September was slightly higher than it planned to be, primarily due to the production of gas condensate having increased ahead of winter. The OPEC+ deal hasn't proved enough to push oil prices higher, as earlier anticipated, but meanwhile there's no doubt that any increase could cause prices to fall under more pressure.

The scenario of further deepening the cuts hasn't been formally discussed so far, but OPEC Secretary General Mohammad Barkindo noted last week that "all options are on the table", with nothing expected before OPEC's next official meeting in December. 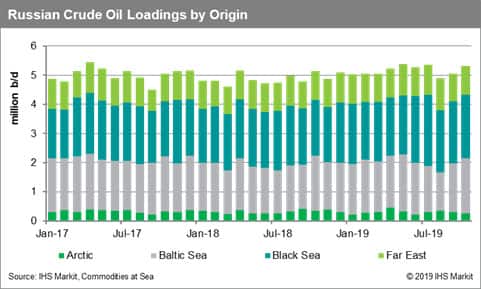 In terms of seaborne exports, shipments from the Baltic Sea have been increasing so far in October, according to data by IHS Markit Commodities at Sea, including voyages through the Arctic heading to China and other Far Eastern countries. US sanctions on COSCO tankers and the dramatically increased cost of transport made some Russian crude grades much more popular in Asia. Volumes from the Baltic have been increasing by more than 10% month-on-month, while flows from the Russian Far East are up by more than 6% since September, as demand for grades such as Sokol have been strengthening. European importers continue absorbing most Russian seaborne exports, while the Far East's market share remains quite strong. Flows to the US and other Asian countries have been increasing as well. 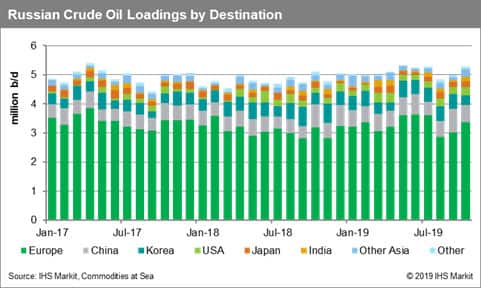 RT @JOC_Events: Join us in Long Beach on Feb 23-24 for #TPMTech, the world’s most substantive two-day event for global #logistics #technolo…