Brazil's crude oil production has continued to bounce back last month, with operations at the Mero Field having restarted. Petrobras shut down the FPSO Pioneiro de Libra floating production in September to connect another well to the production unit as part of ongoing tests at the field. But since the field started operating again, almost 43,000 b/d have been added to the country's production, which now is estimated to stand close to 2.97 million b/d. Year-on-year growth surpassed 13% in October.

Eight new FPSOs have been installed since early 2018, each of which has a capacity to produce at least 150,000 b/d. More wells are scheduled to get connected to the installed FPSOs in the coming months, including the FPSO P-68 that pumped first oil from the Berbigao Field in early November.

The country could prove to become the biggest headache for OPEC, since growth of US production is set to slow down. Together with Norway and Guyana, Brazil will be the main driver of global oil production growth in 2020. 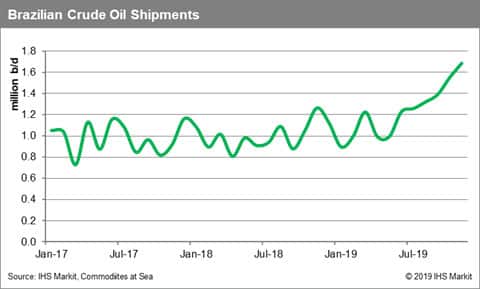 Focusing on crude oil shipments, data by IHS Markit Commodities at Sea suggests that loadings of Brazilian crude oil further increased last month, having reached 1.69 million b/d in November, up more than 8% month-on-month and around a third more than last year. The trend followed since May 2019 has been quite clear, with 1.23 million b/d shipped on average since early 2019, compared to shipments of one million b/d observed in 2018.

Flows to China continue dominating the country's exports, but volumes stand only close to 800,000 b/d, marginally lower than a year ago. However, average flows to China in 2019 have reached 625,000 b/d, much higher than the average of 523,000 b/d shipped in 2018. Flows to other Asian countries has more than doubled since early 2019, with Brazil having developed floating storage facilities in South East Asia. Flows to South East Asia have been close to 200,000 b/d over the last couple of months. Meanwhile, it has become clear that there is high interest for some Brazilian grades in the US, especially since August, while Europe has been absorbing around 7% of the country's shipments. 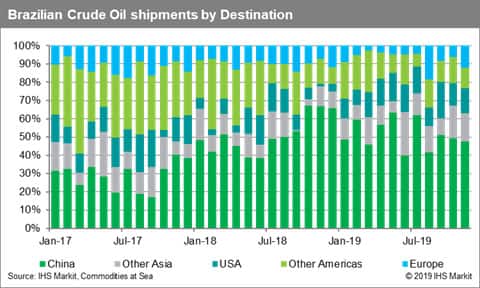