Crude Oil Trade: Changes in the suppliers’ market, while Indian imports marginally down in September

Crude Oil trade flows from Iraq to India surpassed one million b/d in August 2019, with the Middle Eastern country surpassing Saudi Arabia once again and becoming India’s major supplier of crude oil. This has been mainly driven by refiners favouring Basrah barrels instead of much more costly African imports. But September proved a rather disappointing month, according to data by IHS Markit Commodities at Sea, with flows from Iraq to India having dropped sharply, while Saudi Arabia remained strong, close to 830,000 b/d, while imports of crude from the rest of the Middle East increased month-on-month, having reached 630,000 b/d.

Following the OPEC+ production cuts and the sanctions on Iran and Venezuela, the availability of heavy sour crude barrels has dropped in the spot market, leaving limited options for India, which relied on Iraq, OPEC's second biggest producer. Meanwhile, as Saudi Arabia and UAE primarily focus on China and the rest of the Far East, prices of barrels from Iraq looked rather attractive to Indian refiners earlier this year. But the drone attacks in Saudi Arabia on the 14th September caused big changes in the market, as Iraq became an easy option for importers worried that Saudi Arabia could not quickly recover. The market seems to have returned closer to normal levels already, but the sentiment earlier observed translated into a significant drop in Iraqi barrels imported by India in September. Time will tell if this will last, as loadings could increase quickly in October. 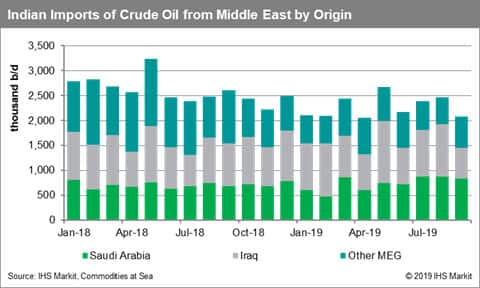 Iraq’s’ relationship with India has been important, with Baghdad recently inviting Indian companies to invest in the country's petroleum sector. Since early 2018, Iraq has been meeting more than a fifth of India’s oil requirements, having supplied India with crude oil estimated to be worth USD 25 billion per year.

Meanwhile, the world's third biggest crude oil importer seems to have been relying significantly less on Nigeria, with September imports only standing at 365,000 b/d, with a downwards trend observed since July. It’s a very different story to tell for imports of Angolan barrels, with a noticeable recovery last month. Volumes surpassed 260,000 b/d, a record high. Overall, African crude imports increased in September, standing close to 800,000 b/d, after a decline observed in August. Nigeria continues to be the third biggest oil supplier to India. 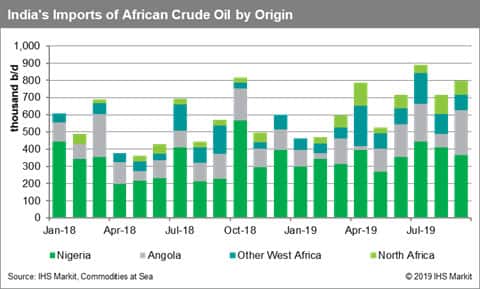 This is a big threat for Nigeria, which could suffer more losses in the future, as one of its major oil customers, India, seems to be favouring cheaper crude oil grades from other countries, including Iraq. With a much shorter distance to be covered from the Middle East Gulf, the cost of shipping crude oil is another parameter working against Nigerian flows to India. Moreover, with West African sweet crude grades becoming more popular as we approach 2020, prices of West African barrels could increase further, which could have a huge impact on Indian requirements.