Brazil's crude oil production has remained strong since November, when it reached a new record high, according to the National Petroleum Agency. Shipments of crude oil have followed a very similar trend, according to data by IHS Markit Commodities at Sea, with January's loading during the first ten days having surpassed 1.5 million b/d yet again, as happened in November. December was only marginally lower, suggesting that the country has managed to stabilise output and exports at this level. The increased output has been a result of the eight new floating production facilities added, with total production up by more than 100,000 b/d since October. 2020 looks very positive for Brazil, with its production and exports set to expand further. 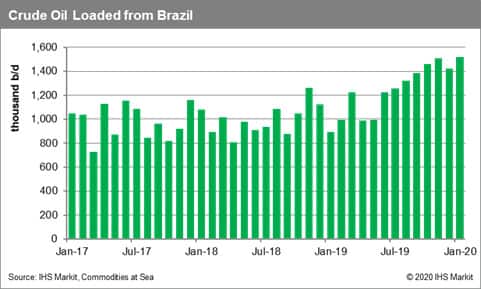 The presalt zone has contributed the most, having accounted for around two thirds of last year's growth in Brazil's crude oil production. The field Lula has been leading the way, having produced more than one million b/d of crude last month. Another very promising field has been Buzios, with current production already standing close to 600,000 b/d.

In terms of importers of Brazilian crude oil, it has been China's appetite to absorb more and more, with flows in Q4 2019 having approached 700,000 b/d. We should also consider flows to other parts of Asia, with Brazil having invested in storage facilities in South East Asia in the second half of 2019, with most of these volumes getting re-exported sooner or later mostly to China as well. This means that China's imports from Brazil increased much faster in late 2019, with more to follow in 2020. The relationship established between the two countries is set to last as China continues to invest in new projects in Brazil. Flows to the USA remained more or less unchanged, even after the sanctions imposed on Venezuela. 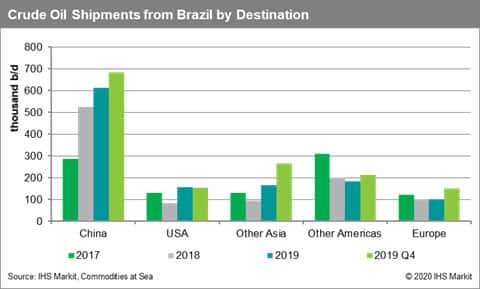