Crude Oil Trade: Another exemption for Chevron in Venezuela, but Rosneft planning to take control of PDVSA

Chevron has been given permission by the US government to continue its operations in Venezuela for another quarter. The exemption from oil sanctions given to Chevron and four other oil service providers (Halliburton, Schlumberger, Baker Hughes and Weatherford International) allows them to work in Venezuela until January 22nd. However, they are banned from exporting diluents to Venezuela which would allow the country to process its heavy crude. Chevron has four joint ventures with PDVSA in Venezuela, whose output can reach about 200,000 b/d of the total 700,000 b/d currently produced in the country.

Meanwhile, Russia's state-owned oil giant Rosneft is understood to be planning to take control of PDVSA. Having been one of the biggest lenders to PDVSA, Rosneft has interests to secure that will be paid back. Russia and Venezuela agreed two years ago on a debt restructuring for USD 3.15 billion over a decade, with minimum payments in the first six years. Payments have to be made twice a year, in March and September, with no clarity on whether Venezuela has paid so far this year. Handing control over to a foreign entity would need to be approved by Venezuela's parliament, the National Assembly, which is now under control of the opposition.

PDVSA controls the country's estimated 300 billion barrels of oil, the largest crude reserves on the planet, which is mostly heavy crude, nowadays considered less desirable. The amount of the company's debt (USD 1.1 billion) doesn't justify the full transfer of ownership. Meanwhile, Beijing doesn't seem to be interested in a takeover.

Elsewhere, Brazil's state-owned oil company Petrobras clarified that the oil polluting over 200 beaches in the country originates from Venezuela. Having "analysed over 30 samples", they have "concluded that it was crude oil from three Venezuelan fields", Petrobras' officials said last week.

In terms of recent shipments and their destination, data by IHS Markit Commodities at Sea suggests that activity observed so far this month (excluding ships not sending any signals) has declined further, with liftings not surpassing 400,000 b/d. India and China continue absorbing most of these volumes, with a marginal increase to report on flows to Europe (if currently reported destination proves accurate). It is mainly Spain importing once again small cargoes from Venezuela. 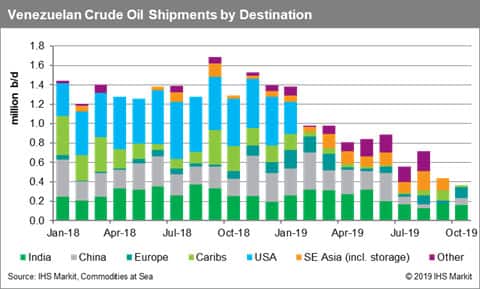